"Ask Doug" The East Coast Bids Farewell to Doug Moorhead, the Father of Pennsylvania Wine and the Great Enabler (PA) 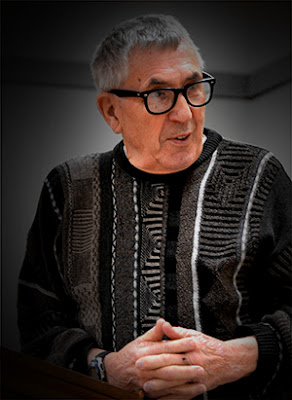 "Doug Moorhead, one of the founders of the Pennsylvania wine industry, died June 10. He was 87," wrote Paul Vigna yesterday. "His Presque Isle Wine Cellars aside Lake Erie became the second winery to open in the state after the Limited Winery Act was passed, following Penn Shore Winery & Vineyards. That was in 1969. Today, it’s an industry with more than 300 wineries and an economic impact of $4.8 billion, based on a 2017 WineAmerica report."
Doug was another of those titans of the East Coast wine world. Beyond being the father of Pennsylvania wine, I often thought of him as the Great Enabler. I bestowed this title upon him, because when I was a fledgling winery owner, I called Presque Isle supplies in a panic. I had ruined (or so I thought) a tank of wine. I was beside myself. Someone told me, "Please hold, I'll get Doug on the line." Doug didn't know me from a hole in the wall. He came on. He was incredibly patient, he asked a half dozen questions, and then told me exactly what I was going to do, step by step. I needed only one thing from him. The rest was all classic wine making steps. He was slow and methodical, and I was crazed.
He told me to go and do it, and the material I needed would arrive the next day. He told me to call back and let him know how it went. I followed his steps methodically. I added what he told me to, and my wine was saved. I called him back a week later, he remembered me, and asked how it had all gone. And he told me the mistake I had made getting there. From then on, I bought everything I could from Presque Isle.  I still have my last bill from them, a credit, hanging on my refrigerator door. I'm looking at it now as I write this.
You see, I'd like to think I was special. But I was not. Doug had handled thousands of those calls over the years, assisting patiently one newbie winemaker at a time. He enabled hundreds of winemakers, and fostered them, and helped them, mentored them. He enabled an entire east coast and mid-west wine region. He was the "answer man". He was in short, irreplaceable. 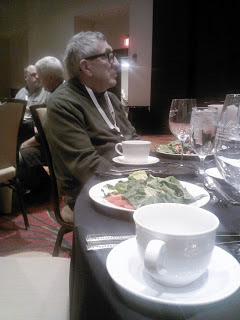 Douglas Moorehead was in the Army, stationed in Germany, after the Korean War had ended but before Vietnam had started. After a two year stint, he came back to the US and decided he wanted to make wine…wines as good as the ones he’d tasted while stationed in Europe. Doug, along with others, pressed the Pennsylvania legislature to pass a Farm Winery Act in that state. He was its main proponent. Pennsylvania was amongst the first to pass such legislation. Now it was time to do something about it.
Almost five decades ago, Frederick Johnson (Johnson Estate) and Doug Moorehead (Presque Isle Winery) pioneered the establishment of French-hybrid and vinifera vineyards, which are also happy in this terroir, especially those with Germanic roots, and they are increasingly being planted for the growing wine industry. 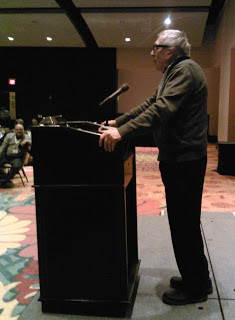 But there was another problem: buying equipment. Back then there were only large wineries. Small wineries had no small suppliers with whom to deal, so Doug began to sell winemaking supplies and equipment and soon started supplying a fledgling east coast industry.
Two generations of winemakers have relied on his advice and understanding, and the resounding phrase, “Ask Doug,” has been the catch phrase for hundreds of winemakers from the east and mid-west.
Doug was funny, self-effacing guy who has lots of great stories. He attended college with Rosie Greer, famed defensive lineman of the New York Giants and later of the Los Angeles Rams. “Nicest man you ever met,” says Doug. Doug knows or has supplied just about everyone in the industry in his lifetime. He was a treasure trove of stories.
And let me tell you, even after a full day of lectures and roundtables, and an evening of festivities, Hudson Catell, and Doug, and Richard, and Howard were all there, Art Hunt too, at an after-hours party, with David Falchek (he of the American Wine Society) and Richard Leahy laying down some incredible wines! He stayed with us every step of the way.
Doug Moorhead was Vice President of Presque Isle Wine Cellars and a company Director. Often called "The Father of the Pennsylvania Wine Industry", Doug grew up on a fruit farm in Harborcreek Township in Erie County and at 80-something still farms on his 170 acre family owned vineyard in addition to his activities with Presque Isle Wine Cellars. He graduated from Penn State in 1956 with a degree in Pomology. Doug's father, Douglas McCord Moorhead, to help survive during the Great Depression, had a side business brokering what few wine varieties there were in the area with several small ethnic wineries in or near Cleveland, Ohio and with Gold Seal Vineyards and Widmer Vineyards in the Finger Lakes Region.
He was also very active in cooperatives in the Lake Erie area and was President of National Grape Cooperative when it was able to purchase Welch Foods and vastly improve the economic prospects of Concord growers. He was later President of Welch Foods in the late 1950's. Doug grew up in that environment and became interested in the economics of growing wine grapes to replace the acreage of other fruits such as sweet and sour cherries, peaches, plums and apples which had become less and less profitable in the Lake Erie area.
Doug experimented with nearly 200 French Hybrid varieties and introduced the growing of European grapes (Vitis vinifera) into the Lake Erie area in the late 1950's. One of his main interests has been to produce quality wines from traditional European grapes grown in Pennsylvania, a goal which several other wineries in the state are now also accomplishing. He was the first chairman of a State Grape Marketing Council which developed the legislative proposal that became the Pennsylvania Limited Winery Act in 1968. He was a long time director and a past president of The Pennsylvania Wine Association, was a long time director in the National Grape Cooperative, which owns Welch Foods, was an adjunct professor in the culinary department at Mercyhurst College in North East, PA, and is currently a director of Wine America and The Pennsylvania Grape Marketing Board.
Though he enjoyed walking a bit more in his later days, Doug was a competitive runner completing marathons and ultra-marathons into his fifties. He is also an avid Bridge player holding the Life Master rank. "The Eastern wine industry lost one of its lead sherpas," said Kevin Atticks, head of the Maryland Wineries and Distiller's associations. "I’ll miss conversing with him while being outpaced by him on a jog at a WineAmerica conference a few years back."
Doug will never be replaced. He was way to important like that. And he was way to humble to ever even mention anything like that himself. He will be missed.
My article about Hudson Cattel and Doug Moorhead:
https://eastcoastwineries.blogspot.com/2013/03/late-nights-with-hudson-doug-and-howard.html
Paul Vigna's article:
https://www.pennlive.com/news/2021/06/doug-moorhead-whose-winery-was-the-second-to-open-in-pa-dies-at-87.html?fbclid=IwAR2OYWhAcEqXY8A6xWBOUo9SQ9mqZWMHhFmVWklsT9o2yYKKehFBmaxOvs0
Carlo De Vito at 11:40 AM
Share
‹
›
Home
View web version