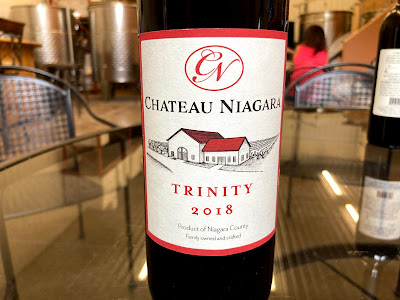 click on pic for video
Join host Carlo DeVito while he drives around Lake Ontario on his way to the Niagara Escarpment, to visit Jim and Kathy Baker at Chateau Niagara. Great white blends like Du Monde and Riesling Rosine, and reds like Saperavi and Bull's Blood! Great stuff! Great region! Good folks! 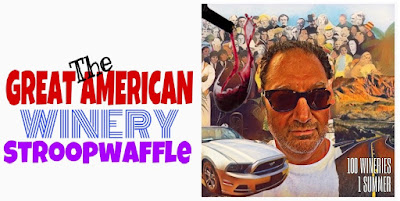 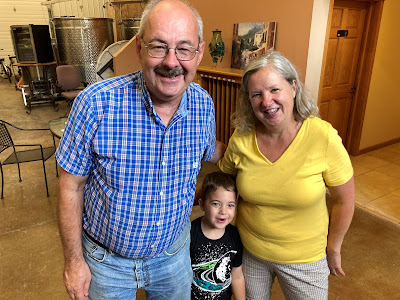 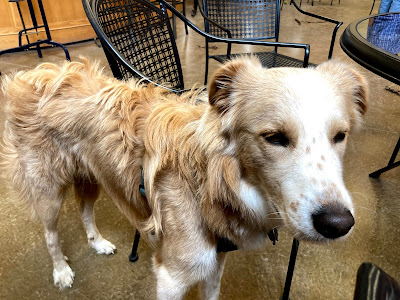 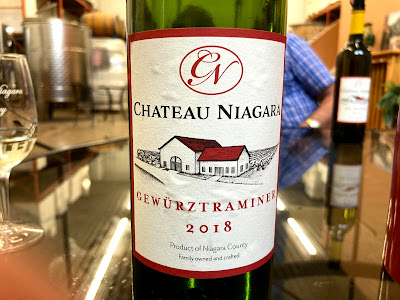 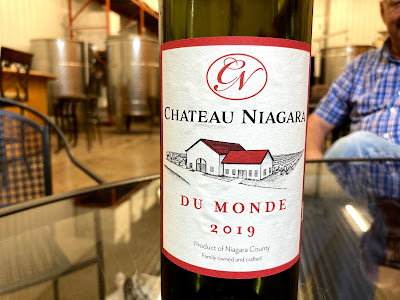 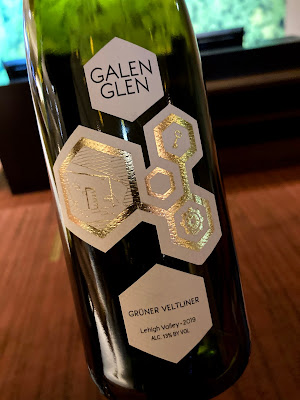 When I am with any of my other wine writer friends, a sure fire way to impress is to pull out a bottle of Galen Glen. Located in Andreas, Pennsylvania, Sarah Rhodes-Troxell, winemaker, and husband Galen Troxel, produce some stellar wines. None is more stunning or prize-worthy than their Gruner Veltliner.
Galen and Sarah established the winery in 1995 when they purchased the Troxell family double century farm from Galen’s father. Galen, a mechanical engineer and 6th generation farmer, and Sarah, a chemist, traded in corporate careers to grow grapes and launch the winery. The 7th generation to farm their land, daughter Erin, has returned to Galen Glen as head of the winegrowing team. Scientifically and culturally relevant, with a tenacious sustainable focus, Erin is a momentous commitment to the future and has already begun to leave her mark.
So it was, when fellow wine scribe Robin Swan Shreeves produced a bottle one night after a busy day of wine tasting. She had procured an open bottle form the Pennsylvania wine competition, from which she had just returned. Several of us, late at night, eagerly held out our glasses.
The Galen Glen Gruner Veltliner 2019 was amazing. According to Jancis Robinson, "Grüner Veltliner means literally 'green grape from the village of Veltlin in the Tirol." This was a big, perfume-y citrus bomb with lime, lemon and grapefruit. Hints of nectarine. The grapefruit just explodes. Also love the shock of white pepper. at the end. Absolutely stellar.
One of the best wineries on the eastcoast! Love that they are from Pennsylvania.
Super, super wine.
Congrats all! 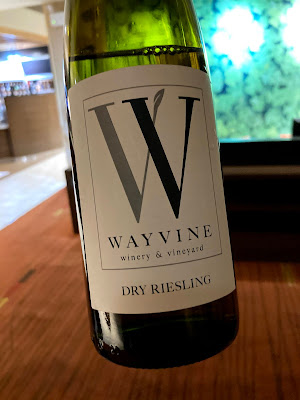 The Wilson family began in 2010 with 3,000 vines planted on the family farm in Southern Chester County, Pennsylvania. They now have 14,000 vines made up of 18 unique varieties over thirteen acres. They produced their first batch of wine in 2011, and opened their tasting room to the public in 2013. They grow Chardonnay, Sauvignon Blanc, Riesling, Barbera, Cabernet Franc, Cabernet Sauvignon, and Carmine among others. Originally they were named Wilson Vineyards, but later changed the name to Wayvine  Winery & Vineyard.
The two Wilson brothers form a formidable enological duo. Zachary Wilson is the self-described Chief Grape Wrangler, and the founder of  Wilson Vineyard and WAYVINE winery & vineyard. Zach jumped into the industry at age 19 while attending Pennsylvania. James Wilson, also a Grape Wrangler, the younger brother of Zach, graduated from the Pennsylvania State University as an All American athlete in swimming and with a degree in Agriculture. This is a family affair, however Mom Nancy Wilson is head of sales. And dad Dave Wilson is the Vineyard Manager.
I got the opportunity to taste this wine thanks to Robin Swan Shreeves, who had just come back from judging a Pennsylvania wine competition. She brought an open bottle to share with some wine writer friends, I being among the happy crew. Thanks, Robin!
This Wayvine Dry Riesling 2019 had a nose of Granny Smith apple and tropical fruit notes. Very floral, with hints of honeysuckle and a slight, slight whiff of petrol. On the palate, a big mouthful of fresh cut green Granny Smith apples, with notes of melon, pineapple. and other lush fruits. And then a nice shock of acidity at the back end. The fruit lingered on and on. A really impressive wine. 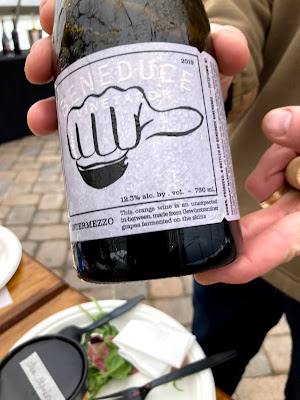 I have witnesses. I was with a group of more than a half dozen wine writers and journalists. Just this past week, we visited, in a very socially distanced tasting, on a cold rainy day at Beneduce Vineyards, in Pittsdown, NJ. 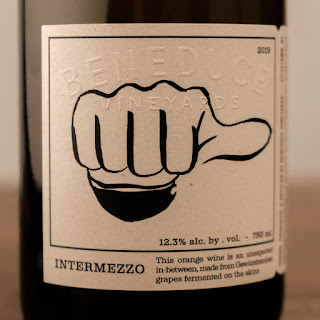 Beneduce Vineyards has been making a version of this orange wine in their experimental series #CRAFTEDseries since 2014. According to the winery, "years of trial and error that have finally prepared it for the big leagues." Hmmmmm. I have had a number of orange wiens from around the US and around the world. Not always my favorite, self-admittedly, but I have had some lovely ones as well which I quite enjoyed.
For those who are not sure, according to wikipedia, "Orange wine, also known as skin-contact white wine, skin-fermented white wine, or amber wine, is a type of wine made from white wine grapes where the grape skins are not removed, as in typical white wine production, and stay in contact with the juice for days or even months.This contrasts with conventional white wine production, which involves crushing the grapes and quickly moving the juice off the skins into the fermentation vessel. The skins contain color pigment, phenols and tannins that would normally be considered undesirable for [commercial] white wines, while for red wines skin contact and maceration is a vital part of the winemaking process that gives red wine its color, flavor, and texture."
Intermezzo is part of the #CRAFTEDseries under the Beneduce label. The wine is an estate grown Gewürztraminer, fermented in open containers with 10 days of skin contact. The wine was aged on the lees in neutral oak for 9 months, then bottled unfined and unfiltered.
The wine poured for us was slightly hazy. True to form, the wine had a light orange hue to it. It had classic Gewürztraminer aromatics of lychee and tropical notes. The nose was super big. But there was something else. a lovely orange zest note on the nose. And orange blossoms as well. The wine had the classic notes of Gewurztraminer, but again, the orange zest came through again on the palate. Never over powering, but always present and to be contended with. The was was complex, elegant, and incredibly refreshing. And there was never any doubt that the wine was an orange wine.
#CRAFTEDseries #intermezzo 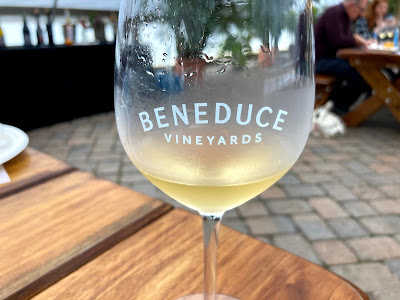 But here is why it's the best! It was hazy, yes. But the haze doesn't bother me. Here's the thing. There was no VA (volatile acidity) present. There was no funk. There were no perceivable faults in the wine. People who champion natural wine will claim these are parts of that process. I'm not disagreeing. I'm not putting down natural wine. The world of orange wine cane be difficult/dicey  And I have had good orange wines that lack those characteristics. Maybe it's just a matter of taste. Many of my colleagues in tow agreed. But I say that this is easily, hands down, the best orange wine I have ever tried. Aromatic. Perfectly hued. Absolutely and positively refreshing and delicious, without VA or funk, it was in fact the single best orange wine I have ever tried. 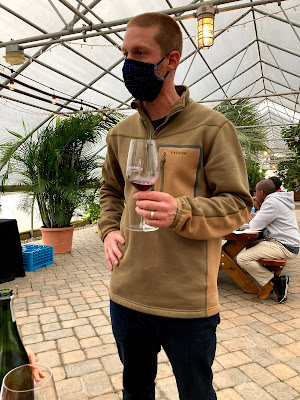 From his bio, "In 2010, Mike Beneduce graduated Magna Cum Laude from Cornell University with dual degrees in Plant Sciences and Viticulture/Enology. The recently introduced major focused on techniques specific to cool climate grape growing and winemaking, and most classes were taught in one of the local vineyards or Cornell’s new student winery.
Mike also gained experience working at Sawmill Creek Vineyards in the Finger Lakes region of NY, where he was trained in the arts of pruning and canopy management by a 4th generation grape grower. He is a Certified Sommelier under the Court of Master Sommeliers, and remains an active professional member of the international gastronomic society the Chaîne des Rôtisseurs."
Great job, Mike! 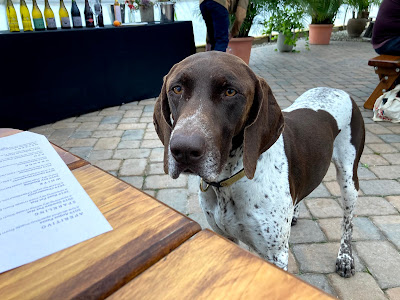 And just for edification, Louie Beneduce, the winery dog, agreed with me as well. 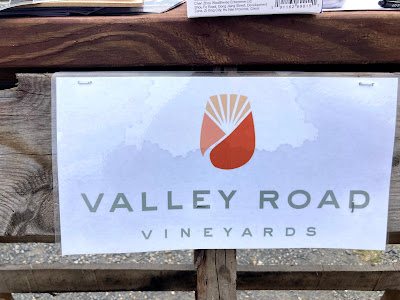 Founded in 2015, Valley Road Vineyards was conceived by a group of friends who brought talents from successful careers. The combined to create a vineyard and winery operation in the heart of the Monticello Viticulture Area. Led by co-founder and CEO Stan Joynes, the group found an ideal site for a new vineyard and tasting room on Route 151 at the head of the Rockfish Valley in Afton, Virginia. The first vines were planted in the spring of 2016. 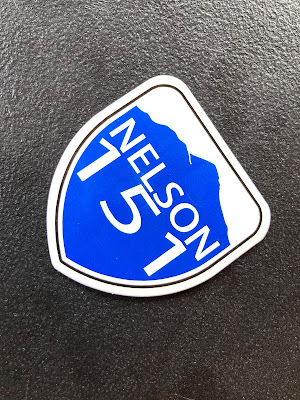 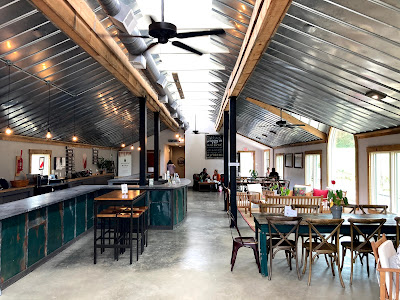 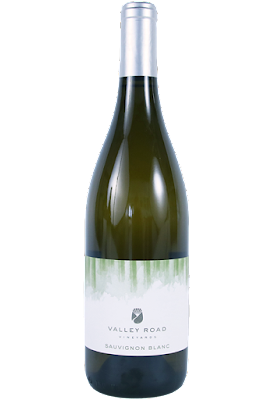 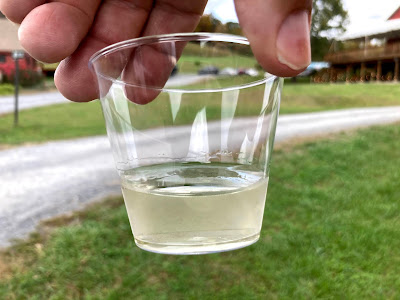 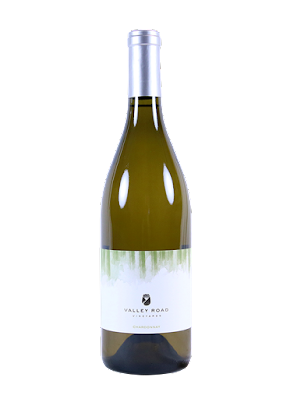 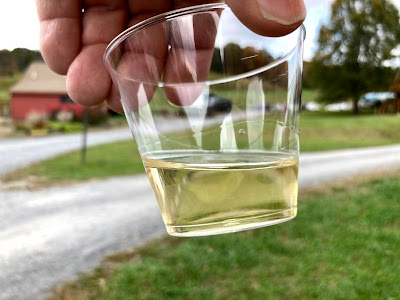 Valley Road Chardonnay 2018 is 100% Estate Grown Chardonnay aged in French Oak. This old world-styled Chardonnay, with a lovely, light crisp sliced apple and pear, with a mid-palate of creamy mouthfeel and a terrific acidity that keeps it fresh and honest. Fantastic Chardonnay. Loved this! 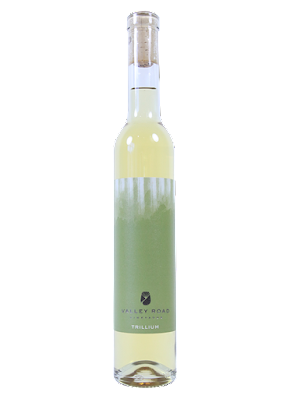 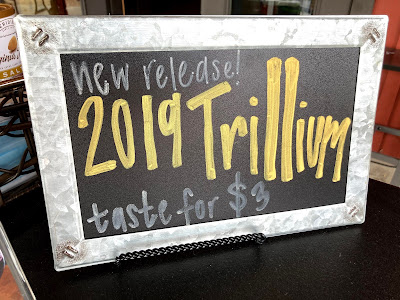 Valley Road Trillium 2019 is 100% late harvest Petit Manseng. I was soooo intrigued by this! Beautiful pale gold color. This had a big nose of honey, apricot, honey, corn meal, and hibiscus. The flavor was fantastic. Beautiful tropical fruits, melon, mango, pineapple, and hints of honey. But there was also acidity at the end that kept this sweet (but not super sweet) wine honest. Absolutely something different. Absolutely mesmerizing. 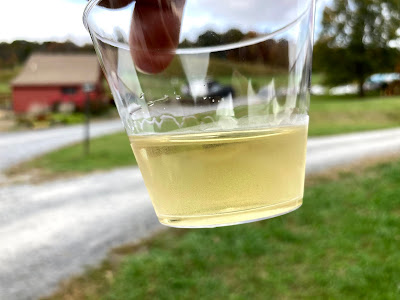 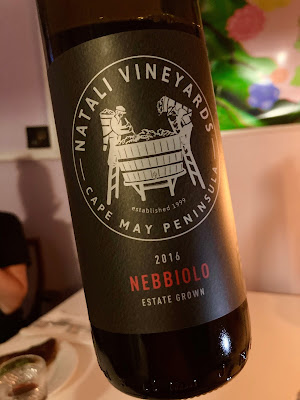 Natali Vineyards is a winery in the Goshen section of Middle Township in Cape May County, New Jersey. Formerly a pasture for horses, the vineyard was first planted in 2001, and opened to the public in 2007. Natali has 7 acres of grapes under cultivation, and produces 1,800 cases of wine per year.
Natali Vineyards is located in the Outer Coastal Plain AVA, and produces wine from Cabernet Franc, Cabernet Sauvignon, Chardonnay, Dolcetto, Merlot, Muscat blanc, Nebbiolo, Pinot gris, Sauvignon blanc, Syrah, Tempranillo, Trebbiano, Viognier, and Zinfandel grapes. They also make a series of fruit wines.
For those not familiar, the Cape May Peninsula AVA is an American Viticultural Area located in extreme southern New Jersey. The 126,635 acres (51,000 ha) wine appellation includes most of Cape May county and a small portion of Cumberland county. The region is characterized by well-drained sandy or sandy loam soils of low to moderate fertility, and a relatively long growing season. The climate is strongly moderated by the influence of the Atlantic Ocean and Delaware Bay. The region is in hardiness zones 6b, 7a, and 7b. The AVA is entirely contained within the larger Outer Coastal Plain AVA, but is distinguished from it primarily by a more moderate temperature, providing for a longer growing season.