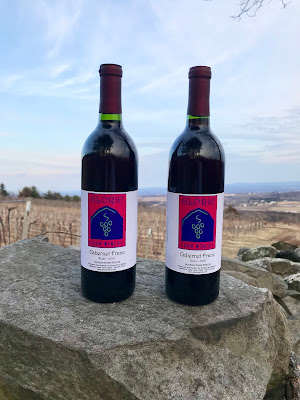 As you have read in my report for the CORK REPORT Glorie Farm Winery in Marlboro, NY was  sold to Dan and Jacqui Heavens.

Glorie is one of the larger grape growers in the Hudson River Region AVA and supplies a number of neighboring wineries with Hudson River Region fruit. “We are ecstatic to have found buyers Dan and Jacqui Heavens,” former owner Doug Glorie told me. “They have the desire and the will to carry on the success and tradition we have created here at Glorie Farm and Winery. We know they will be successful.”

This farm has been productive for many generations. Previously known as Stoneside Farm, the Glorie have been growing 20 acres of fruit including peaches, nectarines, pears, apples, quince, black currants, and – of course – wine grapes. Doug planted his first grape vines in 1983.

Doug left his engineering job in the mid-1990s, and became a full-time farmer and winemaker. Glorie Farm has 15 grape varieties in the ground, including hybrids, chardonnay, riesling and cabernet franc. The winery also made a great move in hiring traveling winemaker Kristop Brown, who has turned out some incredibly well-received estate cabernet franc wines, as well as others.

“We are thrilled about this opportunity!” said Jacqui Heavens. “We hope to continue to build on the legacy that Doug and MaryEllen created here: a beautiful, authentic place with a focus on high-quality estate fruit and wine. We are hard at work and can’t wait to share this experience with our guests.” 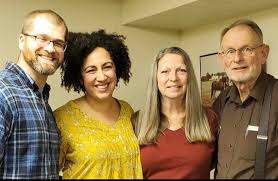 Dan and Jacqui Heavens will have some quality wines to start off their run.

As I wrote for Inside.com, the Hudson Valley has been the historic heart of New York's winemaking industry. But in the last decade its reputation for quality wines has improved greatly, making it a region on the come. At a recent tasting of the Hudson Valley Cabernet Franc Coalition, Glorie Farm Winery's two barrel samples (two separate vineyard blocks) drew some of the highest praise from all around.

Glorie's well-known winemaker Kristop Brown is known to be one of the better winemakers in the valley (he also formerly made wine in Walla Walla). New owners Dan and Jacqui Heavens have decided to sell the two vineyard blocks separately (originally there was the thought to blend the two into one). It was too much fun tasting the two blocks side-by-side. Hence, the winery is releasing Glorie Farm Cabernet Franc West - 2018 and Glorie Farm East - 2018.

The East - 2018 is made from newer vines, and the flavor is all bright red cherry like a fresh cherry pie. Big red fruit and a lovely, lip-smacking finish that clings to the palate for a long time. The West - 2018 comes from a much older block. The flavors are dark cherry and dark raspberry, hints of mocha, graphite, and prune. It's deep, multi-layered, and luscious. It's sex in a glass! This is what wine geekdom is all about. Too much fun to pass up!

Congrats to all!
Posted by Carlo De Vito at 8:16 AM