Bashakill Vineyards has a special microclimate made possible from the warm air flowing off the Bashakill Wetlands, which could protect the grapes from the otherwise frigid New York cold climate. They use sheep as nature's lawn mowers to maintain their land, keep the weeds in check, and fertilize the soil. All of their grape pressings and stems go back to nature, decomposing in their organic compost. There are more than 4 acres of grapes, including Marquette, Cayuga, Arandell, and Aramella.

The winemaker is Paul Denino is the owner winemaker there. Everything is done by hand.

Bashakill Lavender Wine 2018 starts off with a big dollop of green apple, peach, and pear. However, it doesn't stop there. The wine is then gently infused with a touch of local, organic lavender. The result is a lovely perfume-y white with forward fruit flavor and a nice zippy finish. Refreshing and unusual. And delicious! Loved the previous vintage which was only available previously in growlers, and is now being bottled. Yes!

Chris Missick and  some of his family members bought Villa Bellangelo. In 2015 Chris Missick became the winemaker. In 2016 they opened Branch by Bellangelo in Geneva, NY, emphasizing food service. And in 2017 they overhauled the winemaking equipment and crush pad including cross flow filtration. Chris is quick to give credit to others, saying, "I couldn’t do it without the great cellar team of Daniel Budmen and Alex Wheeler."

I recently saw Chris and Laure in Albany, and they were pouring their Bellangelo Sparkling Riesling 2016. Bellangelo produces several sparkling wines including a classic Brut, Cuvee, and two varietal wines including Gewurztraminer, and Riesling. The Riesling had a classic nose of green apple and tropical fruits, with a lovely bread-y edge that created a cobbler-esque touch. Notes of peach and lychee. And a lovely, zippy acidity which complimented beautifully the many fine bubbles. A lovely, lovely wine. Great job! Congrats Laure and Chris!
Posted by Carlo De Vito at 1:33 PM

For those of you unfamiliar with Sheldrake, Sheldrake Point Winery is named for the prominent point of land on which it sits, located on the western shore of Cayuga Lake. Operated as an orchard and dairy farm from 1850 to the mid-1980s, the 155-acre lakeshore farm lay fallow until 1997 when a small group of wine enthusiasts organized the purchase of the land and founded the winery. Today, Sheldrake Point Winery continues the agricultural tradition with 60 acres of vineyard planted to 10 vitis vinifera varieties, which are used to make approximately 8,500 cases of estate grown, produced, and bottled table and ice wines. 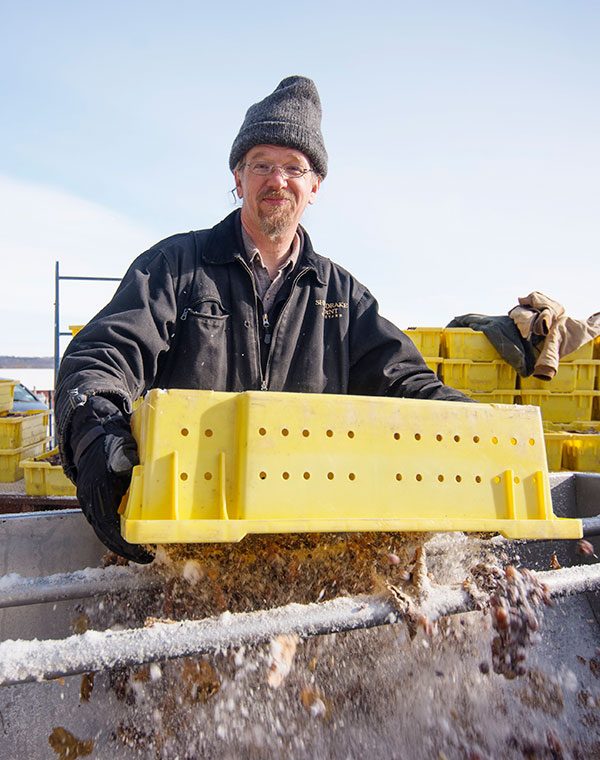 Dave Breeden has been the winemaker at Sheldrake Point since 2002. He has not one, but two degrees in chemistry, and one in philosophy. He's a formidable figure in the Finger Lakes wine scene, despite his unassuming demeanor. He's a terrific winemaker!

The Sheldrake Point Gamay Noir 2018 got a three day cold soak and then fermented on the skins 8 days. They brought in 10.4 tons on October 25, 2018. The wine went through a malolactic fermentation. Pumpovers during fermentation 1-2x per day, .5 hours each time; wine rested in barrel for ~5 months. The wine was also aged in oak...50% 4th use or older French barrels, 7% 3rd use French barrels, 43% 3rd use or newer large format (400 or 500L) French barrels. The idea was that the wine would soften but have a fruit forward attack.

The result is a wine that leads with strawberries and fresh cherries right out of the glass. A big attack of fresh fruit. From there some lovely notes of plum and vanilla come forward with nice spice and minerality. The resultng finish leaves the flavors of cherry and strawberry lingering on the palate for a very very long time, and a nice easy finish. Mouth watering and delicious!

here's the first piece I ever wrote about Sheldrake Point....
http://eastcoastwineries.blogspot.com/2010/10/sheldrake-point-vineyard-gamy-and-cab.html