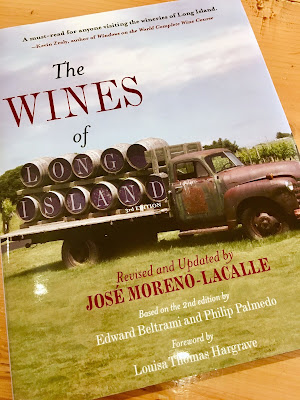 Jose Moreno-Lacalle is as erudite a wine writer as you may meet. He is a combination of William F. Buckley (tho he leans much closer to center), James Beard, and Steve McQueen (if you've ever seen him drive is small sports car at mad speeds). He certainly knows more words than I do, and he knows their meanings. He speaks in complete sentences.And he knows his wine...stone cold. He writes and edits his wine website Wine, Seriously. 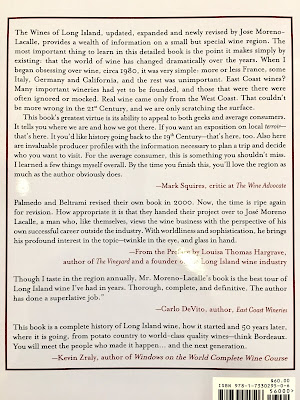 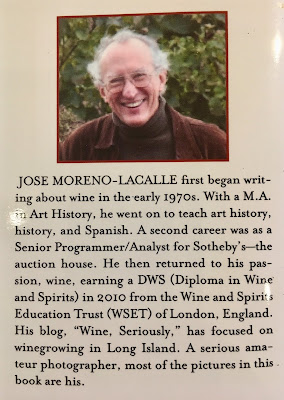 This updated and revised edition of The Wines of Long Island covers the history, terroir, viticulture, wine-making, and vintages of Long Island wine, along with profiles of all 62 wine producers, from Brooklyn to Orient Point on the North Fork and Montauk on the South Fork.

According to his website, "The Wines of Long Island was originally published in 1987 and a second, revised edition was issued in 2000.  19 years later, it remained the best and most complete single volume on the history, geography, viniculture, winemaking, and the wineries of Long Island.  It was carefully researched and very well written.  It is also seriously out of date.

In the 19 intervening years a very great deal of change has taken place in the wine industry of the region. In 2000 there were 25 wineries and vineyards, about half of which are no longer in business; in 2019 there are 62, including several wine brands that have no winery or vineyard as such and use a crush facility.  A handful of the wineries are not even in the East End, but elsewhere in Suffolk County, with two in Brooklyn.

19 years ago the issue of sustainability was scarcely on the radar. Today, sustainable winegrowing is a major issue worldwide, and a new entity, the Long Island Sustainable Winegrowers association, is providing independent certification for members.

The new edition of The Wines of Long Island provides all this new information as well as updates to the history of the region in a new edition.  Every wine producer on Long Island is described in the book, some extensively, often with anecdotes. This edition is intended as the principal reference and guide for the wines of Long Island.  It has 274 pages, a foreword by Louisa Hargrave, and an expanded section on terroir, varieties, and vintages.  Most of the more than 130 illustrations are in color." 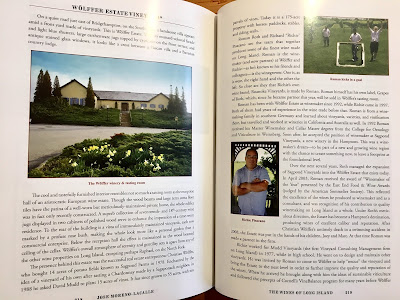 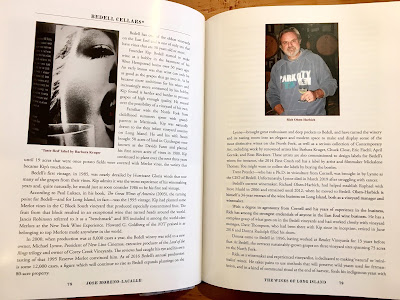 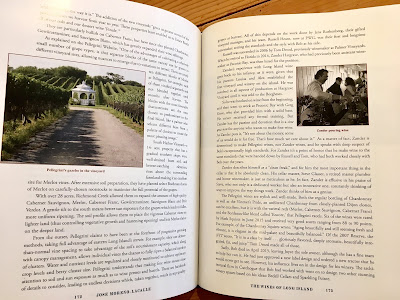 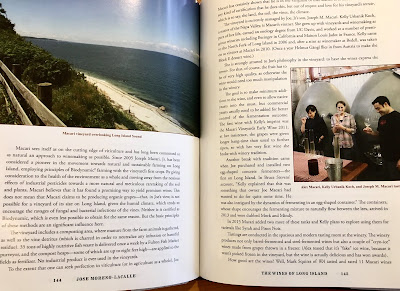 SPOILER ALERT: The favorable quotes on the book's dust jacket include the always impressive Kevin Zraly (of Windows on the World fame), Mark Squires (Wine Advocate), Louisa Hargrave (first vintner on Long Island), and the straggler of all of them....me.

Since the first edition of this book appeared, much has changed, and Jose has kept up with all those changes. In this all new third edition, each producer is painstakingly described in full. He has interviewed many of the island's winemakers and owners. He has detailed the vintages, the people, and the wines, as well as focusing on the sustainable movement and has even included a wonderful vintage chart!

The book is thorough, complete, and definitive. It is richly illustrated with full color photos of the people, places, and things that make Long Island wine unique. The book operates on three levels: It is as up-to-date as a complete reference on Long Island wine; it is thorough and complete for information on wine, trends and people; it is as beautiful a coffee-table styled book on Long Island wines as anything published.