I really like Fox Run Vineyards for three reasons: I like owner Scott Osborn, his os one of the most forward thinking and professional wine people in the business, and a terrific promoter of New York state wine. I like winemaker Peter Bell, who had tutored a whole generation of young winemakers, and makes terrific wine. And last, I like their wines.

The other night I was looking through the cellar for something to drink with my dinner.  I made cast iron fired Italian sausages, pan fried peppers, and a salad with apples, avocado, and white balsamic. A lovely meal, but I needed something to make it work. I needed a wine.It was then that I found a dusty old bottle of Fox Run Vineyards Pinot Noir 2006. 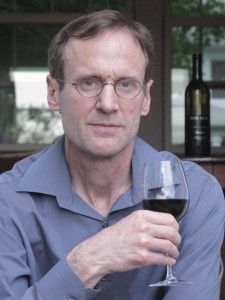 According to his own company bio, "Peter Bell brings a science-based, rationalist approach to winemaking, but does not deny that this ethos must necessarily collide with purely hedonistic and emotional aspirations in order to achieve wines that we all lust after. He integrates biochemistry, microbiology, and other words ending in -y with a purely corporal, joy-driven approach to his craft. This often involves listening to the right music and hugging his colleagues." He has a quirky sense of humor, he has tons of experience and knowledge, and is one of two or three Finger Lakes winemaking mafia that plays a mean banjo (along with David Whiting and old pal Howard Bursen, who now makes wine in Connecticut).

Fox Run is a leader in the New York state industry. They sell affordable wines, because they need to be competitive many miles from home. Its in more than 14 states, is for sale in Canada and China. And can be found in Wegman's all over the east coast.

A Fox Run Pinot Noir 2006. 2006? That wine was 13 years old. That was the year Justin Timberlake brought sexy back. Daniel Powter was having a Bad Day. It was the year of Brokeback Mountain, Walk the Line, and Crash. W was President. 2006 was a wet year, but sometimes I find that doesn't mean anything. It depends on the vineyard and the winemaker. Was it past it's prime? I thought it must be, but one never knows. So I brought it up stairs, dusted that bad boy off (took a wet paper towel and wiped that sucker down) and pulled the cork. I wasn't sure if I'd find wine or vinegar....the anticipation was great!

So I got a good glass out (one of my expensive Riedel Pinot Noir glasses) and poured myself a sample. Cherry, bright and ripe, and dark and juicy pulsated out of the glass. Whiffs of lavender and cedar and vanilla and blueberry all came through as well. On the palate it was all cherry, bright and dark, with some small amount of tannins in the middle, and a lovely vanilla ending. With cherry lingering long after the wine had gone down. In short, it was superb.

Whien I later told Scott that I had just tried my 2006, he laughed. "I don't even have a 2006!" His eyes sparkled with pride. As so they should congrats to both Scott and Peter!