Coppersea is one of the quieter distilleries in the Hudson Valley. They tend to make their stuff, show up at events and farmers markets, and let their spirits do the talking. For a long time, their production was small, mostly Raw Rye, and they held a cult status among Hudson Valley spirits collectors.

The distillery was founded by Angus MacDonald. He passed away and the distillery was reborn. But they kept his basic message which was excellent ingredients, and they must be local...all local.

Christopher Briar Williams is Chief Distiller & Blender / Orchardist. According to the website, "Williams conceives and develops Coppersea’s spirit expressions, manages general distillery operations and represents the brand in the market. He initiated Coppersea’s floor malting, mashing and distilling techniques and is responsible for barrel management, blending and overall quality. He also oversees Coppersea’s pear orchard....Christopher honed his skills as a brewer and distiller in the Chicago area at Metropolitan Brewing and Few Spirits. Prior to that, he spent several years working on farms in the Hudson Valley. He was a founding board member of the New York State Distillers Guild. Christopher holds a BA in American studies from the George Washington University. He is an avid backpacker and spends much of his free time in the Catskills backcounty."

Williams is backed up in the distillery operations by Kerry Beyer and Patrick Franco and Brad Nagle. Michael Kintslick is CEO.

In the last year or so, Coppersea repackaged their whole line, and introduced some new spirits. I like Coppersea's new look, and expanded production (they can now be found much more readily on bar shelves than say four or five years ago). They are all about local, and use only local ingredients. They do their own malting and use New York oak to age their spirits, making the spirits truly local. 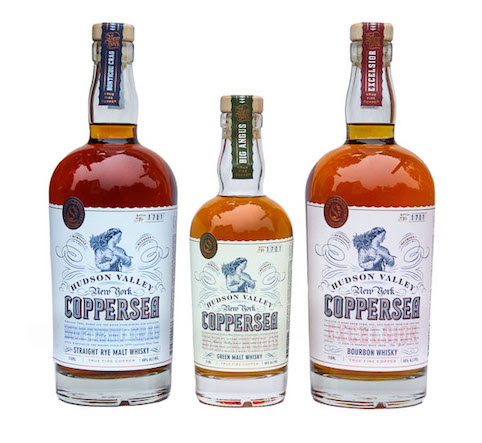 The Coppersea Excelsior Bourbon is made from 100% New York grains and aged in New York oak, making it a truly local bourbon. It has a mash bill of 60% corn, 30% rye, and 10% malted barley. It's smooth and easy drinking, with notes of  sweet corn, cereal, caramel, chocolate, apricots, and cherries. A nice dose of vanilla too. Very nice!

According to their website, Coppersea Big Angus "is an oak-aged single malt whisky made with 100 percent unkilned, or “green” two-row barley malt. Typically, malted grain is kiln-dried after the germination process to generate nutty flavors and aromas and to make it non-perishable for storage and shipping. Since Coppersea is one of the rare distilleries in the world to malt its grain in-house, we are able to use the fresh green malt immediately, preserving the earthy, herbaceous qualities that are lost in kilning. Coppersea Distilling is proud to bring this ancient, all-but-lost style of whisky back into the world. Big Angus honors the memory of Coppersea’s founding Master Distiller, Angus MacDonald." The spirits are aged in 1 year in 2nd year used barrels. As promised in the tasting notes, the fresh hay, lemongrass, and fig come through loud and clear. The caramel and spices are also lovely.

The last is the CopperseaBonticou Crag Straight Single Malt Rye. Bonticou Crag takes its name from the peak overlooking the distillery's farm. Bonticou Crag Straight Single Malt Rye is made from 100% Hudson Valley rye from their own and neighboring farms. They malt the rye themselves, kiln it to a light toast, and mash in open-top wood fermenters. As with all Coppersea spirits, they distill twice in direct-fired alembic stills. So, it's 100% Hudson Valley rye that's then aged for at least 2 years in new charred oak barrels. Caramel, cinnamon, exotic spices, and lots of black pepper and gingersnap come through. Very, very lovely.

Love the repackaging and love the lastest series of whiskies!
Posted by Carlo De Vito at 8:03 AM