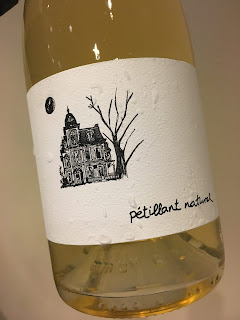 So, at Eastern Winery Exposition 2019 in Syracuse I had the opportunity to try a unique wine - Early Mountain Vineyards Petillant Natureal (Malvasia) 2018. Early Mountain Vineyards is located in the foothills of the Blue Ridge Mountains. It was oriiginally owned by Revolutionary War veteran Lieutenant Joseph Early, who served under General George Washington at Valley Forge. In 2005, Jess and Sharon Sweely planted the first vineyards on the property. Jean Case and her husband, Steve, purchased the property in 2010 and, after some renovations, re-opened it under the Early Mountain brand in 2012.

Ben Jordan oversees all aspects of winemaking, vineyards and production at Early Mountain. A native Virginian who began his winemaking career in Sonoma County, Ben previously held the position of GM and Winemaker with Michael Shaps Wineworks.

Malvasia is from a group of wine grape varieties grown historically in the Mediterranean region, Balearic Islands, Canary Islands and the island of Madeira. There are red and white Malvasia. It is now grown in a number of other regions. The grape was traditionally used almost exclusively for a sweet variety of Madeira. But there have been a small cadre of quality wines being made by smaller producers.

But I'd never had a sparkling Malvasia before, so I was intrigued.

Early Mountain Vineyards Pettilant Naturel 2018 was made from a white Malvasia grape. The nose exploded with peach cobbler, there were also notes of apricots and white currants and a hint of honey. The wine had big mouth feel, lovely fine bubbles, and a wonderful finish with a hint of zip to keep the wine refreshing rather than cloying. A lovely, lovely pet nat. Very pretty and very easy to drink.

Brilliant!
Posted by Carlo De Vito at 9:17 AM