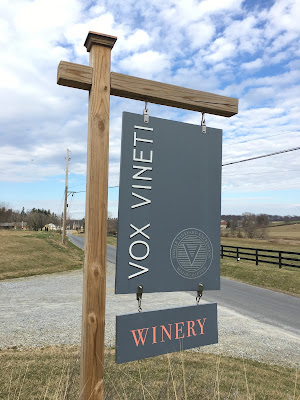 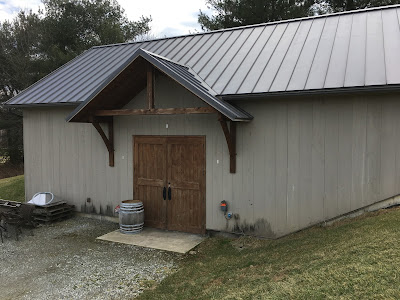 In March I stopped by a new winery n Pennsylvania - Vox Vineti in Christiiana, Pennsylvania. I was heading down to Lancaster, and decided to make a few stops. My good friend Paul Vigna had suggested I call Ed Lazzerini and make a pit stop there. It was a little out of the way....but it was well worth the trip! 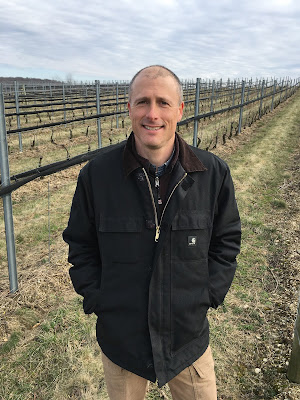 Ed is a successful businessman who wants to turn his passion for great wine into a real live thing. Like the ancient sculptor Pygmalion who kissed his ivory statue Galatea, and brought her to life, Ed and his wife have sculpted the land, and brought forth art! Vox Vineti means "voice of the vineyard" in Latin. 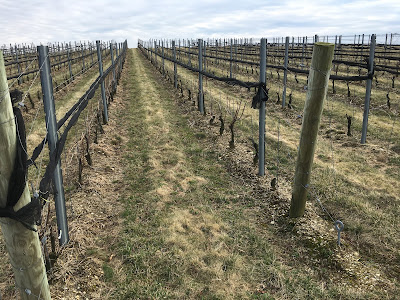 Ed is now out to make the most ubiquitous wine in Pennsylvania, they want to make the best wine in Pennsylvania, then one the east coast, then the country, then the world. An admirable goal. Many are called...but few succeed in this quest.They intend to make only estate wine from their own Sauvingon Blanc, Semillion, Cabernet Franc, Merlot, Petit Verdot, and Malbec plus a bit of Carmenere. They also planted Nebbiolo and Barbera. 5 acres at 2,000+ vines per acre (0.8m x 2m spacing and 0.9 x 1.8 m spacing). That's a lot of vines. Their soils are composed of fractured schist, sandy loam and quartz. 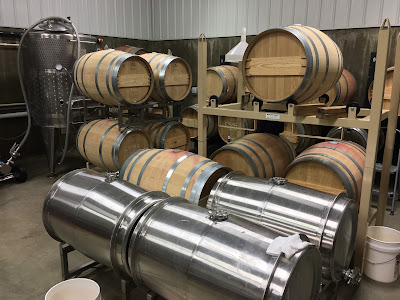 "Customers with a broader wine drinking background are frequently surprised that our wines remind them of many they've enjoyed while traveling in Europe," Lazzerini told a local paper. "What stuns just about everyone who comes through our cellar door is how rocky our vineyard soils are; most people can't believe anything would grow in them. But it's precisely this extremely low-vigor, schist-laden soil, which differentiates our vineyard from most other currently planted sites in the Mid-Atlantic region. Thanks largely to all that rock, we're able to produce compelling wines on a consistent basis." 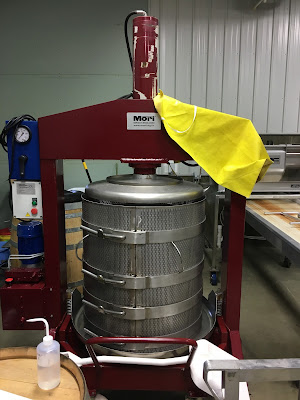 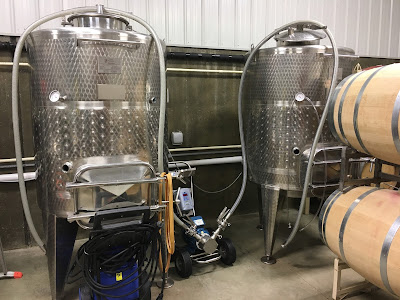 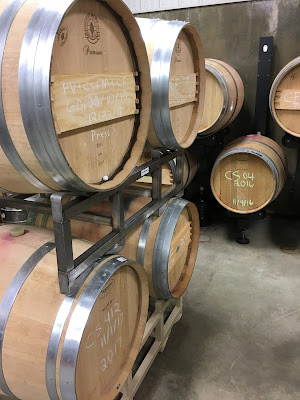 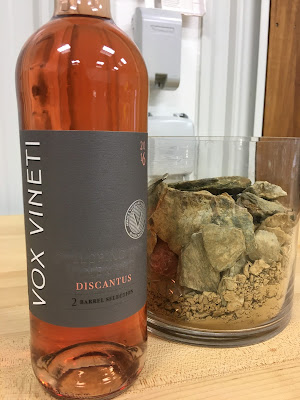 Vox Venti Galloping Cat Discantus 2016 is a fabulous rose made from 50% Barbera, 25% Cabernet Franc and 25% Nebbiolo. It's a result of slow, cool fermentation in neutral French oak barrels. This was an incredible wine!!!!! Big strawberries, limes, cream, but tropical fruit notes as well, all followed by a citrusy, dry finish. Absolutely wonderful! 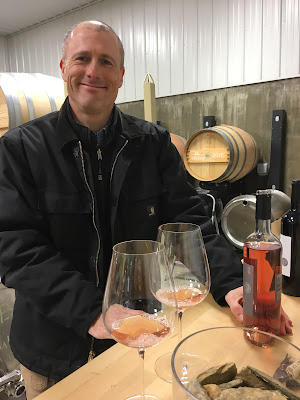 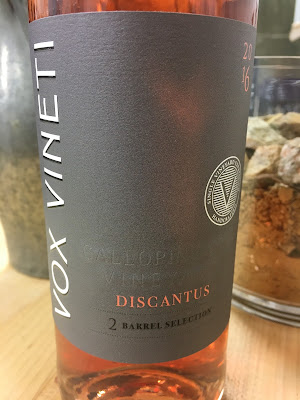 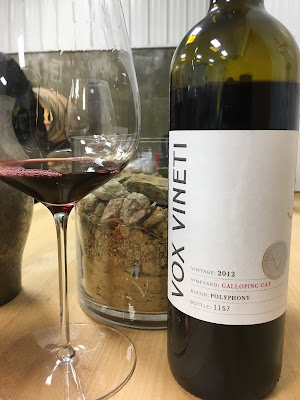 Vox Veneti Galloping Cat Polyphony 2012 is a bend made up of 35% Cabernet Franc, 35% Merlot, 15% Petit Verdot, 14% Malbec, 1% Carménère. The wine was made using a stainless steel fermentation, and went through a malolactic fermentation in oak. The wine was then matured for 15 months in barrel (60% new French oak, 40% neutral French oak). It was bottled unfined and unfiltered. 4 barrels were produced. The wine was exceptional. Big notes of dark cherry and cassis were followed by mocha and cocoa, with notes of vanilla. The fruit lingers on the palate for a long, long times. A terrific red. 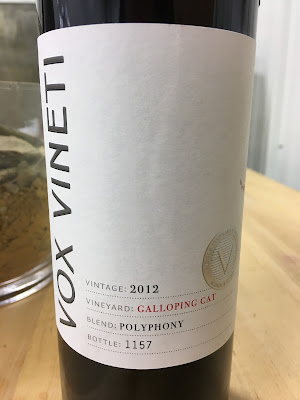 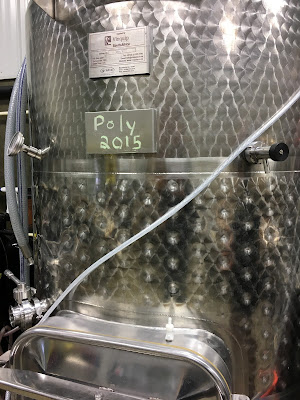 I also tried a tank sample of Vox Veneti Galloping Cat Polyphony 2015 is a blend made up mostly of Cabernet Franc and Merlot, with Petit Verdot and Malbec playing a supporting roles, and a touch of Carménère. Again, big dark fruit, with layers of dark cherry, cranberry, cassis, and other stewed fruits. Very, very impressive! 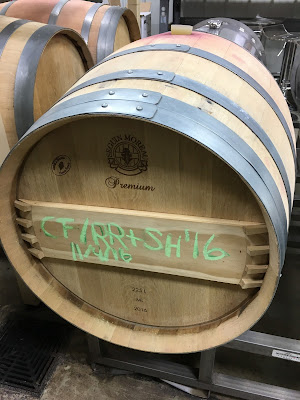 I tried a barrel sample of the winery's Cabernet Franc 2016. Again, very, very impressive. "This is a long-term philosophy which applies primarily to red wines: time in bottle allows them to integrate. There's really no way to speed up this process without using additional intervention in the cellar, which is emphatically not part of our philosophy. It takes patience to grow, vinify, age, and enjoy compelling wines. Vintage conditions play a role here as well in terms of creating exceptions to this strategy...some wines don't require longer-term aging before they can be enjoyed [i.e. most white and rose wines, and to a lesser extent some reds]," Ed told the local press. 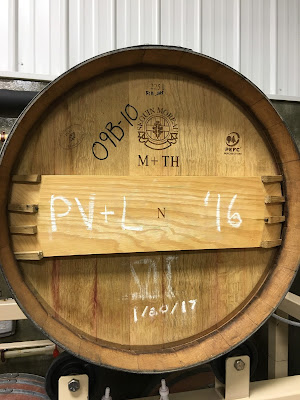 The barrel sample of the Petite Verdot 2016 was also quite impressive. Big and lucious and deep, this was also incredibly impressive. 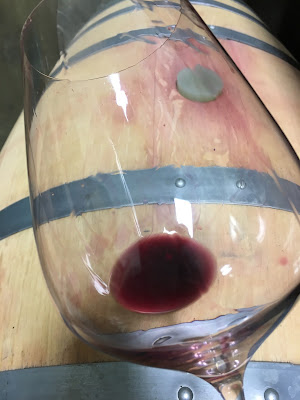 "A wine's textures, flavors and aromas fluctuate throughout its lifetime.  Once in bottle, there are typically points in time along an "integration continuum" when a wine simply smells, tastes and feels balanced when you drink it.  Wines can also gain complexity with time:  primary fruitiness, tannins, and acidity begin to share the stage with all sorts of amazing flavors and aromas [mushrooms, leather, tar, roses, chocolate, herbs, etc]. We've observed this with our own 2012 vintage now that it's been in bottle for three years." 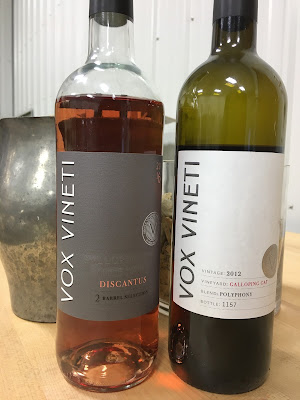 The verdict in in. Vox Veneti has certainly made a great first step! This small, high quality boutique winery is impressive right out of the gate. And the futures I tasted in the barrels and the tanks were also incredible. A huge addition to Pennsylvania and east coast wine making.  Congrats to Ed and his wife.
Posted by Carlo De Vito at 8:09 AM