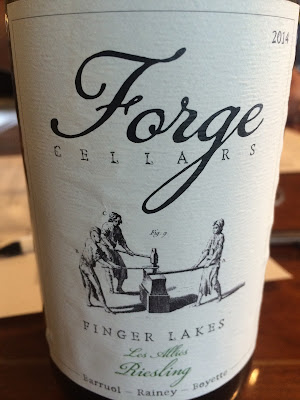 Forge Cellars in the Finger Lakes released their first vintage in 2011. The impresive trio that produces the wines includes Louis Barruol, Rick Rainey and Justin Boyette.

Barroul is the famous winemaker. "Louis comes from a winemaking tradition of 14 generations.  His family has been located at their historic property in the village of Gigondas in the Southern Rhone Valley of France since 1570.  Louis grew up among the vines and took over the estate from his dad in 1992, proceeding to improve quality and grow a vigneron-negociant arm of the business.  Chateau de St. Cosme is now regarded as the benchmark of wine quality in Gigondas."

Rainy is in charge of the Vineyards and General Manager - "Originally a Florida boy, Rick came to the Finger Lakes by way of Philadelphia twenty years ago with the aim of owning a winery.  During the past nearly two decades, he has been selling and buying wine (mostly French) for an international, fine wine distributor-importer.  With Forge Cellars, it seems that Rick has finally come full circle and gotten to dig his hands into the dirt."

Justin Boyette is the steady hand that oversees winemaking on a day-to-day basis. "Winemaker, Steady Hand - Justin works diligently with Louis to make the Forge wines, handling all day-to-day winemaking and élevage with Assistant Winemaker, Alexandra.  He is the co-owner of another winery on the east side of Seneca Lake called Hector Wine Company and before that, held winemaking positions at Red Newt Cellars, Atwater Estate Vineyards and Poplar Ridge Vineyards."

I tried the wines at the Hector Wine Company while I was in the Finger Lakes last. I had heard a lot about them. Great reviews for their Pinot Noirs, Rieslings, etc. They've even released some oak aged Rielsings. You have to like what you hear about Forge Cellars.

THE ALLIES, THE FRIENDS, THE UNITED ONES. - This is small batch fermentation and winemaking at it's boutique best. According to the owners, "Every year Les Alliés evolves naturally by “uncovering” itself. Our indigenous yeast fermentations proceed very slowly. It’s not in spring, but in the summer after the vintage that we are finally able to move toward bottling the wines. Once fermentations are complete, our team begins diligently tasting through our barrels and tanks, giving each a detailed rating and review, and writing personal tasting notes.  When we talk about small batch and individualized fermentations, we really mean it — hundreds of separate, small French barriques from 15 individual vineyards, each with its own story and personality. Along the way, we decide that some very special barrels are stand-outs, and by consensus, the most exceptional of our Rieslings and Pinots.  This is the consensus that makes up Les Alliés — the allies, the partners, the united ones. We don’t “make” Les Alliés, we discover it together, and it’s an easy decision because it tells us what it wants to be."

I tried the Forge Les Allies Riesling 2014. the grapes for this wine come from the east side of Seneca Lake. This is a bog, flowery expression of riesling bursting with tropical fruit, Lychee, and passionfruit and green apple and hints of petrol. A lovely, refreshing white with zippy acidity and impressive structure. The flavor of this wine lingers on the palate for some time. 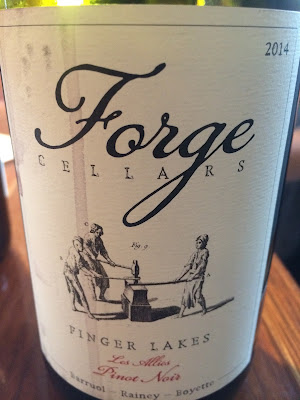 Then I tasted the Forge Cellars Les Allies Pinot Noir 2014. The grapes are from the east side of Seneca Lake. Stewed plums and blackberries come through as promised as well as hints of lavender, blueberry, and a lot of spice and black pepper. There is an earthiness that comes about....bramble? This is an elegant, complex, impressive wine. Really, an amazing Pinot Noir.

I am absolutely late to this party. These folks have been gathering up accolades and plaudits all over the place from Wine Spectator to the Cork Report. Barroul, Rainy and Boyette have crafted an  absolutely exquisite line of fine quality wines!
Posted by Carlo De Vito at 12:21 PM