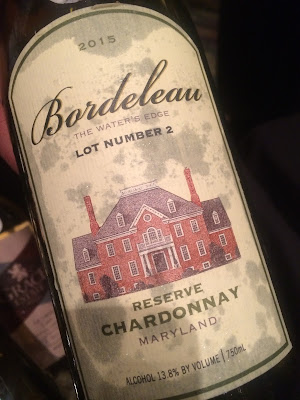 But let's talk about Bordeleau Vineyards for a second. Tom Shelton, owner and winemaker, is involved in creating and perfecting every wine. Tom started making fruit wines while still in his teens.  After purchasing a farm in Allen, Maryland in 1998, he planted his first grape vines in 1999.  Early plantings were Chardonnay, Vidal Blanc and Chambourcin, and he continued planting additional grape vines each year through 2003. Other varieties planted were Merlot, Cabernet Sauvignon, Cabernet Franc, and Sauvignon Blanc.

After considerable deliberation he decided to seek his commercial license in the summer of 2006.  With the renewed commitment, eight and one half acres of plantings were added from 2007 to 2011, including new varieties such as Malbec, Petite Verdot, Pinot Grigio, Viognier, and Muscat.

Bordeleau had been producing great quality estate wines since then. This Bordeleau Vineyards Reserve Chardonnay Lot Number 2 2015 was a lovely, lovely chardonnay. This chardonnay was barrel fermented and made in the Sur Lie method (the idea being that this extends the lies contact with the wine that contributes complexity to the wine). The result is great complexity and balance, and a big mouthfeel and great depth. There are green and red apples, ripe pears, and wonderful cirtus flavors as well on the nose and palate. It finishes with vanilla and spice. An impressive, impressive wine. 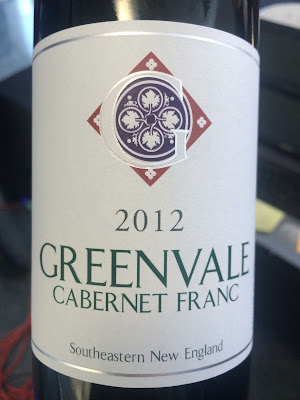 I don't wan to admit how many years I've been driving to Portsmouth, RI to taste Greenvale Vineyards wines. Suffice to say,I may be vain, or embarrassed. Regardless, they've been an east coast engine of quality wine and consistency! Among my favorites is their Cabernet Franc. 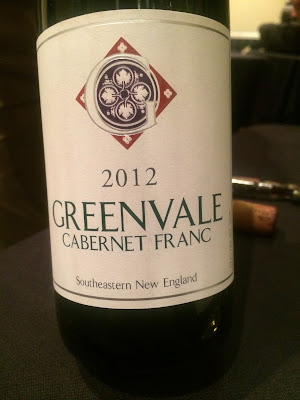 Alas, I have not been in a while, but last year I got lucky. I tasted a bottle of it at the Eastern Wineries Exposition 2017 at the awards dinner. And then someone was fabulous enough to bring a bottle to the blogger's station. Two folks in particular need to be praised - Hever Ortega, the vineyard manager, and Richard Carmichael, the long time winemaker. The Greenvale Cabernet Franc 2012 was exquisite.This is a medium bodied blend of 75% Cabernet Franc and 25% Merlot aged in oak. They usually make between 175-200 cases a year, give or take. Lovely notes of cherry, raspberry and plum linger on the palate and the nose. The wine is incredibly well-balanced, and show some very nice complexity. A lovely, lovely bottle of red wine.

Greenvale does it again!!! Damn that's good wine!
Posted by Carlo De Vito at 8:22 AM 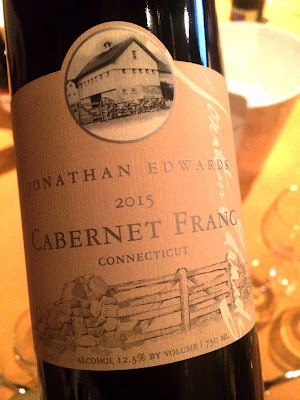 I have written about Jonathan Edwards many times. Continues to be a favorite east coast producer of mine. Located in North Stonnington, Edwards makes wines on both coasts, but I only concern myself with his Connecticut estate wines (his others are lovely, but not for this bog).

I have visited the beautiful winery many times, but this bottle I am speaking of was tasted at the Eastern Wineries Exposition 2017. I had it twice. I had it at the awards dinner that night. Their Cabernet Franc is is an estate grown red, which is most, most impressive, and has been consistent for years.

This Jonathan Edwards Cabernet Franc 2015 was a medium bodied red, made from estate fruit. The wine is approximately 25% aged in new French oak. And then blended with the rest which has been in stainless steel (or older/nuertal French oak) ? Not sure. The resulting wine is immensely pleasurable. The nice, medium bodied, dry red with hints of cherry, cranberry, cassis, and and ends with a lovely, peppery finish. Mouthwatering-ly delicious! 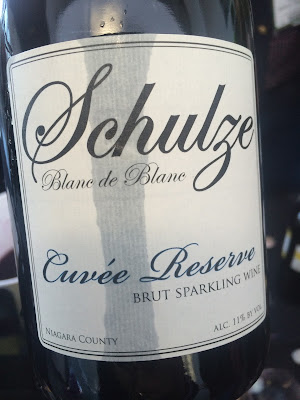 I first tried Schulze wines at the Eastern Wineries Exposition 2017, so I am a tad late with this review. Apologies. Schulze Vineyard and Winery is owned by Martin Schulze, and is located in Burt, NY,in Niagara County. They make quality estate produced wines, both still and sparkling. They grow vinifera grapes such as Cabernet Sauvignon, Cabernet Franc and Merlot, and they also grow Siegfried Riesling and Vidal Blanc, as well as Niagara, Concord and Catawba.

OK, a few things first...I tried two wines, both sparkling. Both were absolutely lovely!And then I also realized that the wines were made by Jonathan Oakes who has developed a cult following over the last few years.

Here's a history of the place: 1969 – The land that now houses Schulze Winery is purchased. This includes a small established Niagara and Concord vineyard which will later be used for juice production. 1970 – Contract begins with Welch’s for juice. 1972 – Contract begins with Great Western for juice. 1974 – The vineyard is expanded. 1980 – Hybrid Siegfried Riesling grapes are planted and a first attempt at producing still and sparkling wine is made at home. 1985 – Cabernet Sauvignon, Cabernet Franc and Merlot grapes are planted as a trial run. Opening a winery becomes an idea and the vineyard is prepared to produce grapes for this venture. The contract for supplying grape juice continues. 1986 – Contract begins with Cliffstar for juice. 2000 – The vineyard expands by planting Cabernet Sauvignon and Cabernet Franc grapes. 2002 – The vineyard expands by planting Vidal Blanc grapes. 2003 – Additional grapes are planted. Contract starts to supply several local wineries with grapes. 2004 – Grafted and cloned Siegfried Riesling grapes are planted. 2005 – Domenic Carisetti is hired as winemaker. Produced and bottled first harvest for our own use. 2006 – State Liquor License and federal permits are granted. 2007 – Schulze Winery opens. A dream is realized. 2010 – Jonathan Oakes is contracted as winemaker. 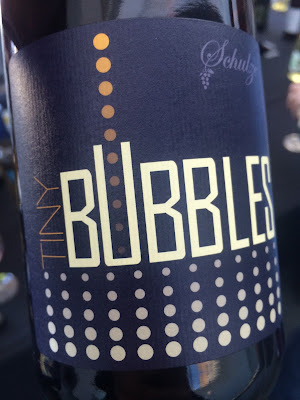 First I tried the Schulze Tiny Bubbles, this light, off dry, fruit fizz was exceptional. Like a lightly styled prosecco, it was fruity but with enough acid, and super easy to drink with a lovely fruity nose with a nice touch of yeast and green apple. Absolutely lovely!!! For the price, everyone should have a bottle of this wine on their table for whatever the celebration is. 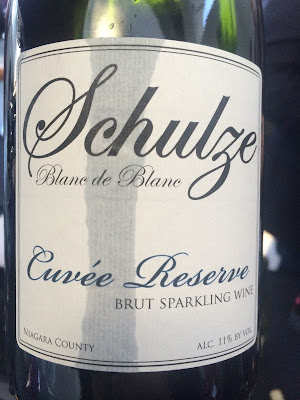 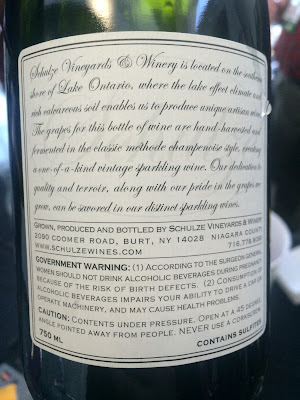 Both of these wines just made me want to drink more. Great to see another quality producer in the region, adding to its growing reputation. Looking forward to trying more! 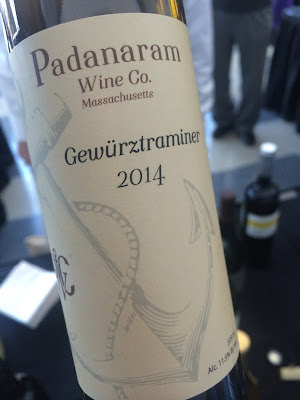 I first had this Padanaram Wine Co. Gewurztraminer 2014 at Eastern Wineries Expo in 2017. Let me just say three things - 1. I apologize for being a little late. 2. Its terrific Gewurztraminer! 3. If you don't like Gewurztraminer, Gewurztraminer yourself!! This was an absolutely terrific wine. Grown at the famed Salt Creek Vineyard in Massachusetts, this is state born and bred. And absolutely amazing. Big nose of floral nose of tropical fruit with just enough spritz at the end. A classic from a producer I know very little about. But this was damned good stuff! Seems to be listed as a wine bar on Facebook, best I can find. Looking forward to trying more, though. 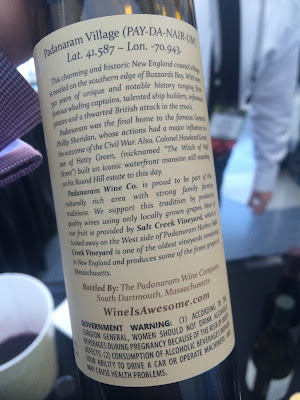 At Eastern Wineries Exposition 2017 I had the opportunity to taste Aaronap Cellars wines for the first time. I must confess I had not heard of them before, so I didn't know what to expect. But I always love trying new things. Indeed, it was an impressive introduction!

According to their website:
Aaronap Cellars is a micro-winery located in Westford, MA. We focus on producing small volume, innovative, artisanal wines from the best vineyards and orchards in New England and beyond. Today’s wine is a result of centuries of trial and experimentation in the vineyards and wineries of Europe. Where else is that history of experimentation best continued but Massachusetts, with its own history of innovation since the first days at Plymouth Rock?

Winemaker Noel Powell seeks to combine his passions for art and history, a scientific background, and his knowledge of traditional winemaking methods to produce unique wines not found elsewhere in Massachusetts. After an introduction to wine while living in Southern California, Noel honed his winemaking talents during years of award-winning home winemaking and enology studies at the University of California-Davis. In 2011, Noel established Aaronap Cellars in order to share his unique wines with a larger audience. 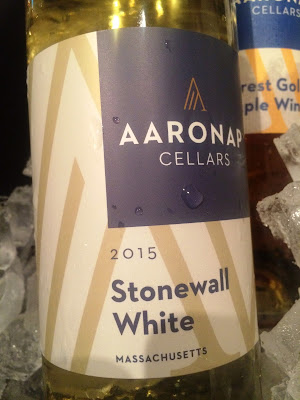 The first wine I tried was the Aaronap Stone Wall White 2015.Itis a most refreshing dry white wine, made with real finesse. This white is an homage to the Northeast’s rugged glacial past, showcasing a mineral backbone to this crisp dry white wine. As advertised, pineapple, rhubarb, and tropical fruits come through, with a lovely floral touch.

The fruit is Finger Lakes, but Aaronap is happy to share every detail, unlike other wineries, so I am happy to provide. This blend of 95% Seyval Blanc and 5% Riesling is from Randall-Standish Vineyards, Canandaigua, NY & Salt Creek Vineyard, Dartmouth, MA

According to the winery, the 2015 Stonewall White, Massachusetts
Reisling grapes from Salt Creek Vineyards, Darmouth, MA were hand picked on October 4, 2015 and whole-cluster pressed.  The juice was cold settled, racked, and innoculated with Maurivin B yeast.  Seyval blanc grapes were hand picked on October 11, 2015.  After destemming, the juice was kept in contact with the skins for 1.5 hr, bladder pressed, and cold settled overnight.  The clarified juice was combined with the reisling  must and innoculated with Maurivin B.  Fermentation temperatures were maintained below 60°F during the 14 day fermentation.  Malolactic fermentation was prevented by addition of SO2 while aging in stainless steel.  After 5 months, the wine was filtered to 0.45 microns and bottled. 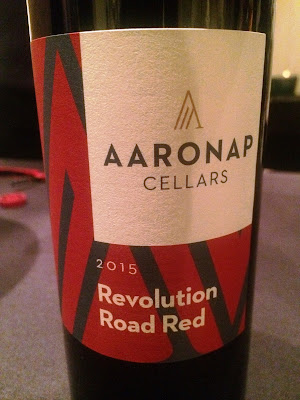 Aaronapp Revolution Road Red 2015 in named for a bit of history. On April 19, 1775, the Westford Militia marched to face the British army at the Battle of Concord. Along the road to revolution, those brave patriots passed the property that would eventually become the home of Aaronap Cellars more than 200 years later. This red is made from grapes grown along the shores of Narragansett Bay in Rhode Island.  $2 from the sale of every bottle is donated to the Westford Historical Society. This was a bold, solid, dry red. A very strong candidate for house red for anytime of year. A great food wine, bound to impress friends an family whether it's pasta, pizza, burgers, or roast pork. It won a Gold Medal, 2015 Big E Wine Competition (2013 Vintage).

Raspberry, red cassis, plum, and black pepper all come through as advertised. Big lush fruit is balanced with tannins and a great flavorful finish that lasts nicely.
This blend of 77%  Cabernet franc and 23% Petite Verdot was grown as Bond-Stowers Vineyard, Tiverton, Rhode Island. The wine was 12 months in 2 year old French oak barrels. Bottled aged for an additional 6 months.

We are extraordinarily fortunate to have located the very special Bond-Stowers Vineyard in Rhode Island along the shores of Narragansett Bay.  Specially selected Pomerol clones of merlot and cabernet franc are farmed as organically as possible and thrive in this unique maritime micro-climate mere yards from the ocean waters. The harsh 2014-2015 winter severely stunted the growth of the merlot vines, which produced no fruit while it recovered.  In contrast, the cabernet franc exploded with fruit, which were hand-harvested on October 24 at 21 brix.  After crushing, French oak chips were added to the must and fermentation commenced with GRE yeast.   Following pressing, malolactic fermentation was done in stainless steel and then the wine was aged in a 2 year old French oak barrel for 12 months.  A small portion of petite verdot was added to replace the earthy fruitness normally provided by the merlot.  The wine was bottled aged for an additional 6 months before release on Patriot’s Day, 2017

Aaronap Cellars is new to the Massachusetts wine scene, but is off to an impressive, impressive start.Noel Powell certainly seems to know what he's doing. I can't wait to visit. But in the meantime, these two wines are worth catching up with! 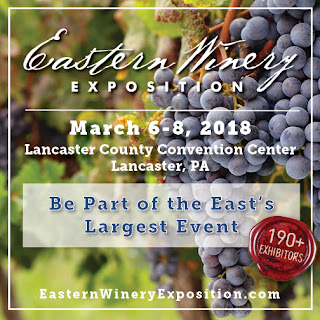 Looking forward to my annual visit to Eastern Wineries Exposition 2018!!!!!!