Behind the Bottle by Eileen M. Duffy: The Rise and Rise of Long Island Wine 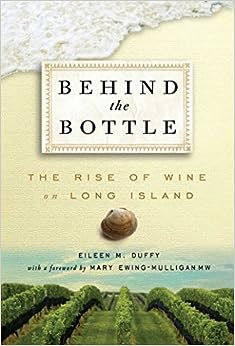 I am Eileen M. Duffy's editor at Cider Mill Press. I feel compelled to write about this particular book because East Coast Wineries, and New York state in particular, are my normal realm of coverage. I have reviewed other books on East Coast wine, and more reviews are due. This book, in particular, falls into the wheelhouse of the editorial concerns of this blog, and thus it would be odd for me to not review or say something about this book. That said, this is more a proud letter from the editor than it is a review. - C. DeVito

I was actually going to write a piece sometime ago about Long Island wine entitled: The Best Winemakers in New York State Are Hiding out in Long Island. To me, Long Island wines have been overshadowed, vis a vis publicity, by Virginia, the Finger Lakes, even the still emerging Hudson Valley. And of course, Long Island based its early reputation on such standards classic noble grapes as Chardonnay and Merlot, both of which grapes have received a bludgeoning at the hands of wine cognoscenti for being too ubiquitous and unoriginal. But it was these wines that helped solidify Long Island’s reputation.

But the truth is that it was Long Island that started the entire quality wine movement on the east coast. Hey were first. They did it better. And they are still doing it great. And in my opinion, some of the eminently collectible and cellar-able wines of New York state and of the east coast are made right there on the island. It is a hot bed of quality winemakers, people like Richard Olsen-Harbich, Roman Roth, Eric Fry, Gilles Martin, Miguel Martin, Russell Hearn. They all bring local and international flair and experience to the region. The game has changed a little. There are hot young winemakers, like Kelley Urbanik Koch, Kareem Moussad, Christopher Tracey, and other, and new varieties, and new ideas. Now, not only do they make great merlots and chardonnays, but also great sauvignon blanc, cabernet franc, malbec, and even albarino. They are making great blends too!
Flat out – Long Island is still the Bordeaux or Napa of the east. They have been cutting edge in quality wine. And they have been cutting edge in sustainable practices. And they make great wines.
I’ve been wanting to publish a Long Island wine book for years, but could not find a quality wine writer who would commit to the project. Then along came Eileen M. Duffy.

Eileen M. Duffy, editor at Edible East End and Edible Long Island, holds a diploma in wine and spirits from the International Wine Center and has been writing about food and wine on the East End since 2003. She’s great. She’s written for newspapers and magazines. She writes for the lay person, and knows how to write a great feature piece. When I was introduced to her by Edible East End publisher Brian Halweil (whom I greatly respect), I thought this was finally the person who could tell this story. She’s been writing the Behind the Bottle feature for the magazine for many years.

Behind the Bottle is a fantastic read!

Profiling owners, winemakers, and personalities from around the country and the world, Behind the Bottle is a fun and intriguing look at the people who have made Long Island into one of the hottest wine regions in the country.

Long Island has been a leader in winemaking since 1975. In the last forty years, Long Island's rise has been meteoric. Long a rural region famed for their duck and their potatoes, Long Island, now visited by 1.3 million people each year, has carved out a wine country second to none. With highly acclaimed wines garnering rave reviews from Wine Spectator, Wine Enthusiast, the New York Times, the Wall Street Journal, and many other publications, Long Island wines have been celebrated around the country and across the Atlantic ocean. Here, Edible East End editor Eileen M. Duffy profiles winemakers and wineries that have received this high acclaim, and shares their stories. Men and women from as far away as California, France, even New Zealand have come here to create a wine country whose wines, including Chardonnay, Sauvingon Blanc, Merlot, and Meritages among others, are second to none. BEHIND THE BOTTLE illustrates the fascinating story from the region's birth to its zenith.

“Behind the Bottle offers lively vignettes of Long Island’s contemporary wine scene. In addition to focusing on the diverse personalities and philosophies of individual winemakers, Eileen Duffy also manages to convey a sense of the momentum that continues to sweep this wine region toward a respected and cohesive maturity.” (Marguerite Thomas, author of Touring East Coast Wine Country)

“[Eileen Duffy] tells the tale magnificently, whether you know Long Island wine or not. How do you weave a patchwork of ideas that adds up to a real feel for a place? You structure your book around the great masters of the region, past and present, who idiosyncratically tell you in many different ways about their personal Long Islands. It's magic.” (David Rosengarten, Editor-in-Chief, The Rosengarten Report)

"To call the Long Island wine region ‘emergent’ is dated thinking. It has arrived and is producing wines deserving of every wine lover's attention. The region also deserves this book. Eileen knows the region, its wines and the folks behind them. That enables her to shine the spotlight on the right people in the right way -- mixing the region's history with its pioneering, inspiring and sometimes controversial personalities." (Lenn Thompson, New York Cork Report)

“American wine is no longer made just on the West Coast. Eileen Duffy introduces us to the winemakers and personalities who have transformed Long Island from a potato-farming resort for New York's rich and famous to a wine-growing resort for New York's rich and famous. Along the way we meet the pioneers who had a crazy idea that European grapes could grow here and the modern pathfinders determined to make Long Island wine sustainable -- not just as a producer of world-class wines, but as an environmentally friendly enterprise.” (Dave McIntyre, wine columnist for The Washington Post and co-founder of Drink Local Wine)

“The American wine industry continues to grow, and with that growth we have seen some emerging regions really shine. Long Island is one of those regions. Behind the Bottle tells the story of Long Island wine from the people who made the region what it is today.” (Michael Kaiser, Director of Public Affairs, WineAmerica, National Association of American Wineries)

"This book will be essential, educational and enjoyable for those who want to learn more about the people, the grapes and the growing conditions of Long Island and its fine wines." (Richard Leahy, author of Beyond Jefferson's Vines)

I think Eileen M. Duffy has done a terrific job relating the stories of the winemakers, and their passions, in a wonderful, easy, fun read. A great series of stories of people who have come to Long Island from all over the world, to make wine in this exciting, and still emerging region.

I think you will like BEHIND THE BOTTLE.
Posted by Carlo De Vito at 9:30 AM