A Fantastic Visit With Christopher Tracy at Channing Daughters (NY) 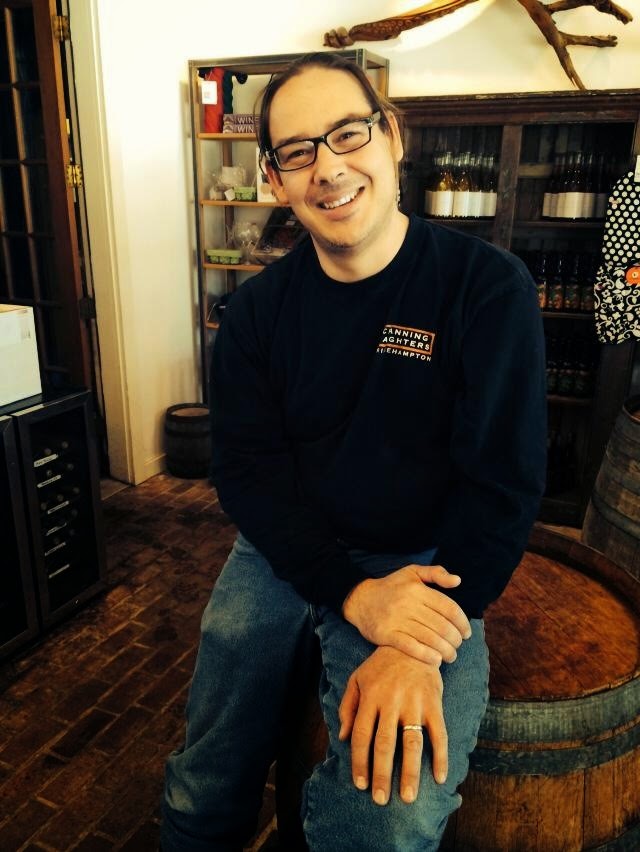 So, less than a month ago I was visiting family and friends in Southampton and paid an unexpected and unplanned visit to Channing Daughters. I dropped in out of the blue on winemaker Christopher Tracy. We had never met before, but I am a fan of his wines, and rarely have gotten out to Southampton in the last five or so years. So it was a great treat to stop in and find him there working towards the end of the day. It was a big thrill!

Chris is a great guy. Charming, chatty, and a wine geek. It's easy to see why I like his wines. We started talking wine and it was only the fact that we were in the waning hours of the day (we both had commitments) that stopped us from talking all day long.

Christopher Tracy is a partner and the winemaker at Channing Daughters. James Christopher Tracy was born and raised in the San Francisco Bay Area. Christopher attended schools on both the East and West coasts, and after earning a BA in Performing Arts/Philosophy, he migrated to NYC to pursue graduate theatre training. In 1993, with wife Allison Dubin, he co-founded the Momentary Theatre, a not-for-profit organization that performed in California, New York, Texas, Connecticut and Hungary. After several years of writing restaurant reviews in NYC, on the side, Christopher attended the French Culinary Institute in Manhattan. After he graduated he worked in everal fine restaurants while he earned his Sommelier Certificate from the Sommelier Society of America as well as the Higher Certificate from the Wine and Spirits Education Trust. He was awarded the Diploma from the Wine & Spirits Education Trust (WSET) which entitles him to the D.W.S. distinction. He also holds a certification from the CWE (Certified Wine Educators) and is currently a candidate for the Masters of Wine. 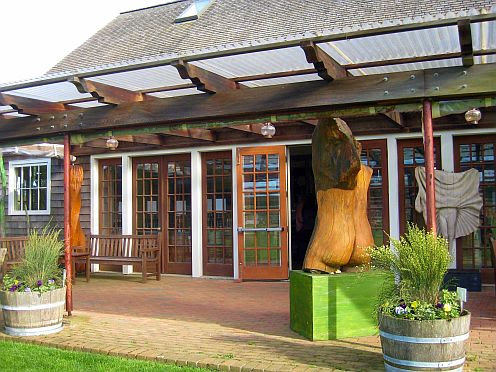 Christopher's initial involvement with Channing Daughters Winery was as a Wine Club Member, then as a Team Merlot member. In 2001 Christopher began developing several new products and prestige cuvees for the winery. He is now a partner in the company, as well as the winemaker.

According to New York Cork Report editor-in-Chief, Lenn Thompson, "I think that most fans of Channing Daughters Winery (and they are an ever-growing army) would agree that it’s a white wine shop. Sure, they make a few different red wines too, but most pale when compared to winemaker Chris Tracy’s stellar white wines." I like Chris's red wines, but the whites are indeed impressive.

Sylvanus 2013 is a wine of place, a vin de terroir. This bone-dry, aromatic white wine is a true field blend comprised of 60% Muscat, 30% Pinot Grigio and 10% Pinot Bianco all grown together, harvested together and fermented together. Sylvanus is not only the name of the wine, but the name of the vineyard. According to their notes, “All of the fruit was hand-harvested, whole cluster-pressed, fermented in stainless steel barrels …and older oak barrels….” Exotic fruits waft across the nose, including grapefruit, tangerine, and honeysuckle all come through as promised. Nice zippy acidity keeps the wine vibrant and refreshing as well as delicious. Fantastic!


According to Tracy’s notes, “The 2013 Pinot Grigio features fruit from both our home farm in Bridgehampton and from the Mudd West vineyard on the North Fork, hence the blended Long Island AVA….For our 2013 version all the fruit was hand–harvested, whole-cluster pressed, fermented in stainless steel barrels (40%) and older/neutral oak barrels and hogsheads (60%). The wine was handled minimally and bottled by gravity (after eleven months on its lees) on August 4th, 2014.” It’s 1000% Pinot Grigio. 2013 Pinot Grigio is an explosion of pears, lemons, tangerine, set against a backdrop of floral notes.  This is a nice, bright, light, zippy Pinot Grigio with lovely minerality, fresh acidity, and a lovely, light finish.

2012 Tocai Friulano Sylvanus Vineyard was an eye opener! It is the only other Tocai Fruliano I know of on the east coast other than that grown and made at Millbrook Vineyards in the Hudson Valley. “Our Sylvanus vineyard Tocai was harvested by hand, whole-cluster pressed and fermented and raised in 47% stainless steel barrels and 53% older French puncheons for eleven and a half months. This white grape is native to the Friuli-Venezia Giulia region in Northeast Italy…” Aromatic and zesty, an elegant white wine. Impressive!

2012 L'Enfant Sauvage Chardonnay
According to Tracy’s notes, “L’Enfant Sauvage is made from 100% Chardonnay grapes hand-harvested from our Brick Kiln and Sculpture Garden vineyards here in Bridgehampton. The grapes are gently whole cluster pressed, the juice settled overnight and then all new French and Slovenian oak barrels are filled to the top. The ambient/wild/spontaneous (whatever you want to call them) yeast kick in and the wine ferments. The secondary malo-lactic fermentation also happens
spontaneously and we leave the wine on its lees until blending and bottling. In the past L’Enfant has spent 13-14 months in oak….beginning with the 2008 and again in 2009 the wine spent 18 months in barrel; in the 2010 vintage our L’Enfant had 20 months to make those barrels home, and this the 2011 vintage spent 22 months in barrel! This way the wine has a chance to live through two winters in wood and as the Burgundians say “then able to stand on its own two feet””

This wine is a paradox. Firstly, the wine itself is lean, bright, and filled with great acidity, so the fruit stays alive in your mouth for a nice, long time. Apples, citrus, pears, honeysuckle, melong, brioche (per Tracy…and he’s right!), and some lovely spices end this gorgeous wine. But it’s a paradox because such a light, light wine shouldn’t be able to carry all that. And it does! Beautifully. This is as layered a Chardonnay as you will fine. Marvelous! 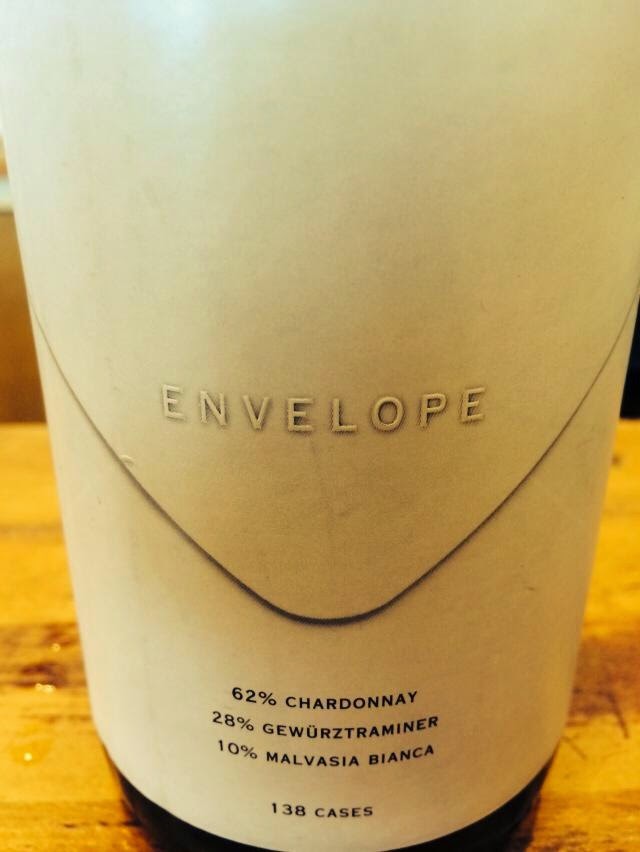 2011 Envelope is made from 62% Chardonnay, 28% Gewurztraminer and 10% Malvasia Bianca. . According to Tracy’s notes, “All the fruit was hand-harvested from our home farm in Bridgehampton and was gently de-stemmed, crushed by foot and fermented on its skins. The wine was all co-fermented (all wild with ambient yeast) for 17 days on its skins after which the wine was bucketed out and pressed off then put in 52% new oak and 48% old/neutral oak where the wine spent 22 months….” The idea is that is a white wine with color, white made like a red. It’s got tannin and structure, with full malo-lactic fermentation and just 5.6 grams of acid according to his notes. God, the wine geek in me is just boiling over with tension! I love this shit!

The result is an aromatic wine that is absolutely incredible. How incredible? I drank the bottle within one day of returning home. And it’s a white! I couldn’t wait to open it! I was like a little kid, it was the first bottle I tried from my entire trip!

It’s a darker white, or it has more color, whatever you want to say. It’s light. You can see through it. It’s just that the hue is more like brass in color. Still see through. Like a good champagne.  Apricots, peaches, honey, roses, lychees, brown spice, apple compote, minerals all come through as promised. This is a great quality wine, made in the European sense, with fantastic complexity and sophistication. Absolutely one of the shining stars of an already impressive wine list. Amazing! 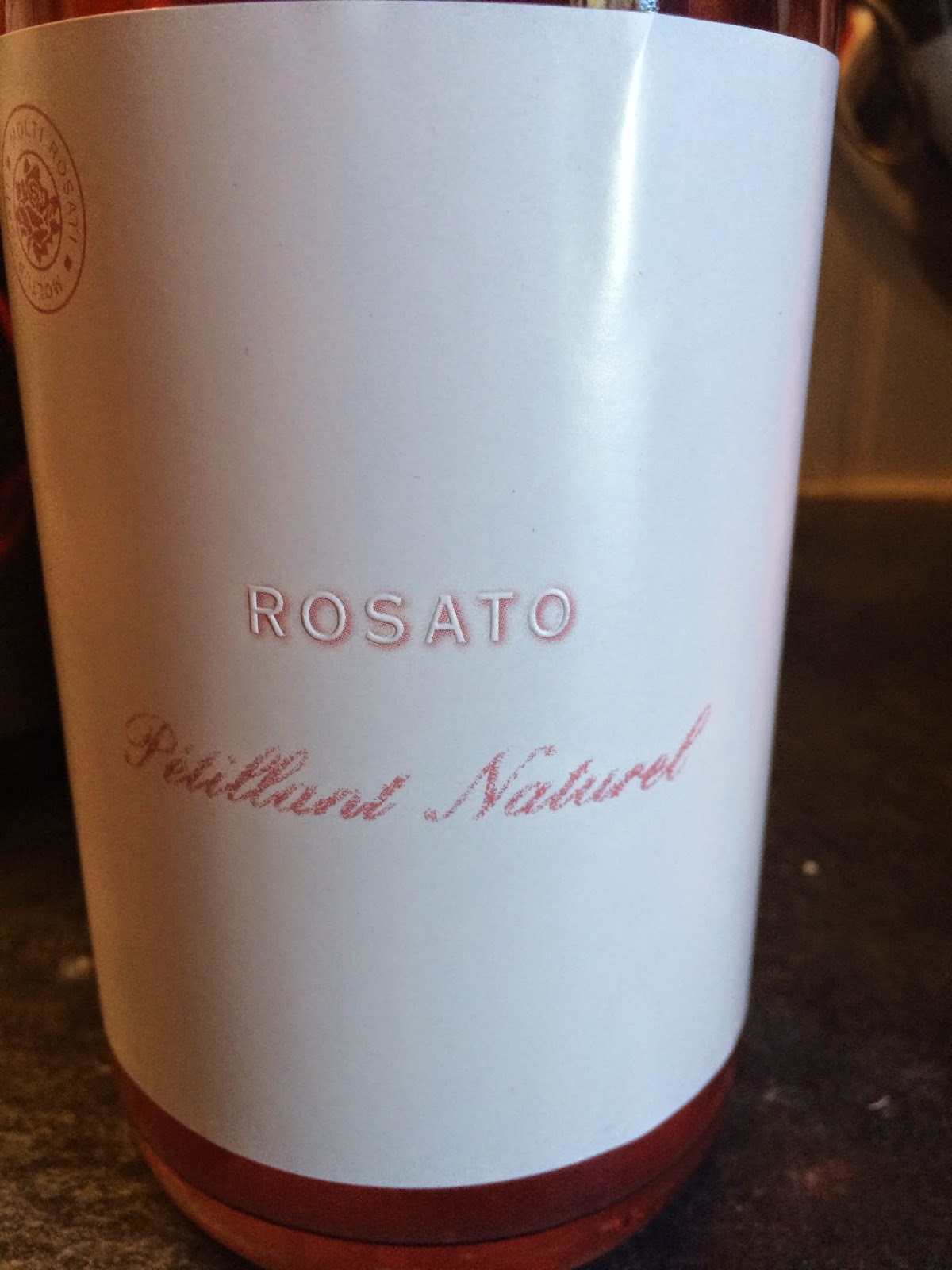 Howard G. Goldberg once wrote in the New York Times, "Rosés are blossoming throughout Long Island wine country. At least 32 of the region’s more than 50 producers make them, and Channing Daughters, with eight, is in the vanguard." I only got to taste one. The Rosato Petillant Naturel 2014, which was absolutely gorgeous!!!!

For those of you not familiar with Pet Nats (as they are known), wine writer Ted Loos explained them best, writing, "The name means “mildly, naturally sparkling” in French, and the wines—known as “pet nats” to their small but devoted fan base—are made in a completely different way than Champagne and prosecco, with a taste to reflect it.In short, winemakers stop the normal winemaking fermentation process before all the natural sugar has been gobbled up, topping off the wine with (usually) a crown cap. As a result, the extra carbon dioxide produced as the yeast eats the sugar gets trapped and voilà: bubbles, though not the in-your-face variety. Pet nats often have a bit of residual sugar (though most are not sweet dessert wines by any stretch) and a slightly lower alcohol content than other table wines, giving them a unique, quirky gentleness."

Bright, refreshing, with strawberries and limes pulsing out of the glass, but with hint of flowers and a nose dose of mineraliness. A nice spritziness, but not bubbly. Absolutely fantastic!


Rosso Fresco 2013 is comprised of 33% Merlot, 26% Cabernet Franc, 23% Petit Verdot, 15% Dornfelder, 2% Teroldego and 1% Blaufrankisch. It's a nice, easy drinking blend. A soft, approachable table reed that exudes stewed strawberries, black raspberry, cherry, plum, and both red and black currants. One can imagine grilling on the deck, chicken, pork chops, sausages, or even portobello mushrooms, and drinking a glass of Rosso Fresco. A fantastic summer red (when it's too hot to drink Cabernet Sauvignon) that's absolutely worthy all year round! Lovely! 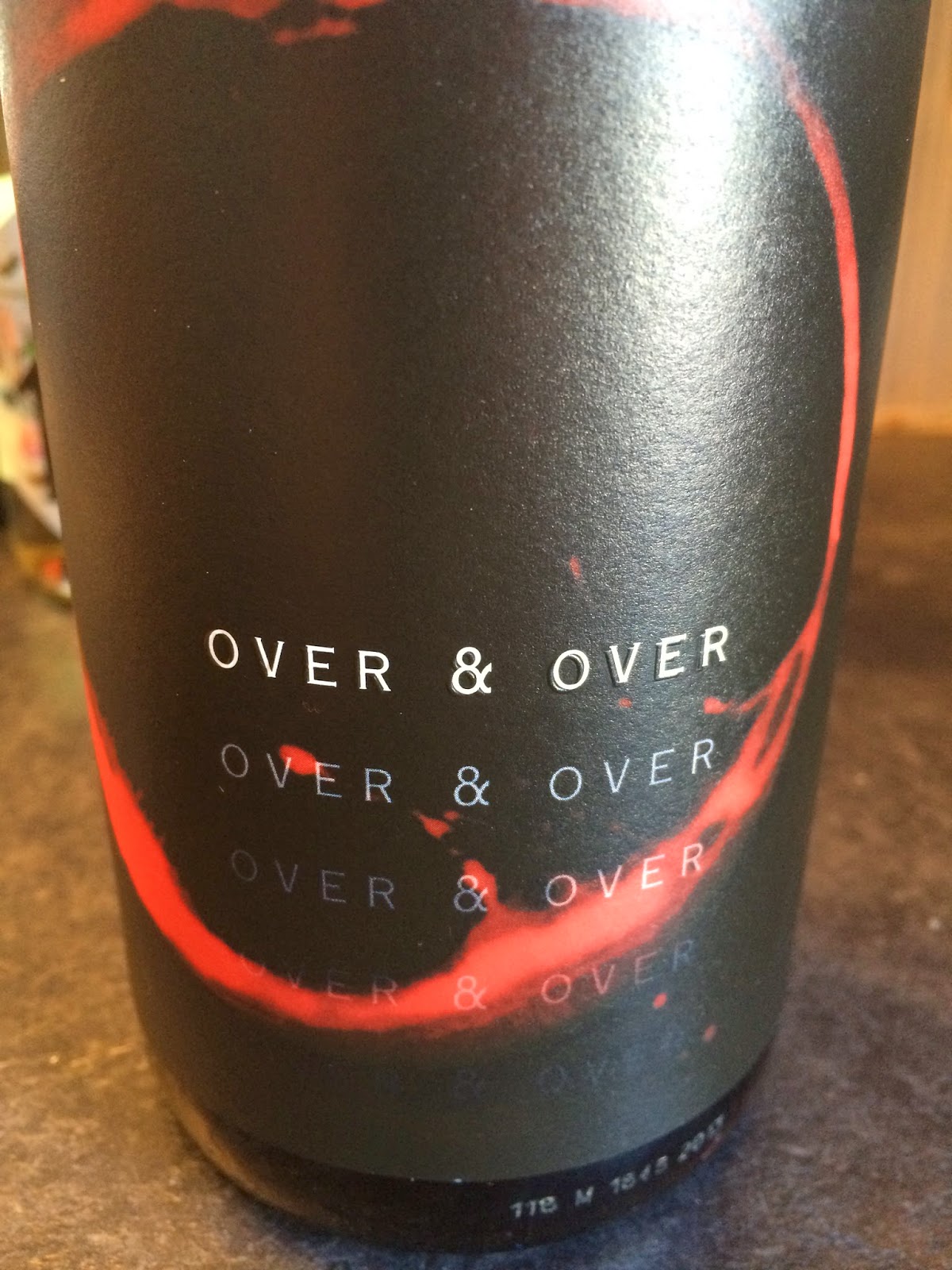 Over and Over Red - Variation 7 is a predominantly Merlot based wine with the addition of Dornfelder. It's about a 70/30 split. More wine geekdom! So help me God, I do love it so! Again, from Tracy's notes, "There are people in the world making red wines with a ripasso method and there are people in the world using a solera system of blending for some red wines but we know of no one, other than us, who have put both together to create a distinctive and tasty red wine. It all began with four barriques of 2004 Merlot that was taken out of barrel and re-passed over the fresh 2006 Merlot and Dornfelder fruit. The wine underwent another primary fermentation and was racked to barriques, hogsheads and puncheons where it underwent another malo-lactic fermentation. Half of the wine was taken and bottled after ten months in oak, and this was Variation One. The other half remained in barrel until the next harvest where it was re-passed over the 2007 Merlot, Syrah and Dornfelder fruit. It was all repeated and we bottled half as Variation Two. We did this again in the 2008 harvest and bottled Variation Three." And so it all began. I get goosebumps with this kind of wine-think.

Variation Seven opens with violets, dark raspberries, black pepper, stewed cherries, baking spices all very much like a Santa Barbara Pinot Noir, but with way more complexity and layers of aroma and flavor. The fruit lasts and lasts. The nose is beautiful. Again, to me, the perfect three season red - perfect for spring, summer, fall - and absolutely worthy of winter as well. Buy a case. It's a great house red your friends and family will absolutely be impressed with.

I tasted a dozen wines, and Christopher could not have been nicer nor more accommodating. The wines were absolutely fantastic! It made me want to move to Southampton and start living the life of a summer resident ASAP. Fantastic stuff. Christopher Tracy is a wine geek's dream come true. His wines are inventive, thoughtful, and soulful. Loved it! Absolutely coming back sooner rather than later. I'll need to buy a couple of bottles for my family that lives in the area. So look forward to coming back and tasting what Christopher has in store next. Amazing.
Posted by Carlo De Vito at 4:12 PM