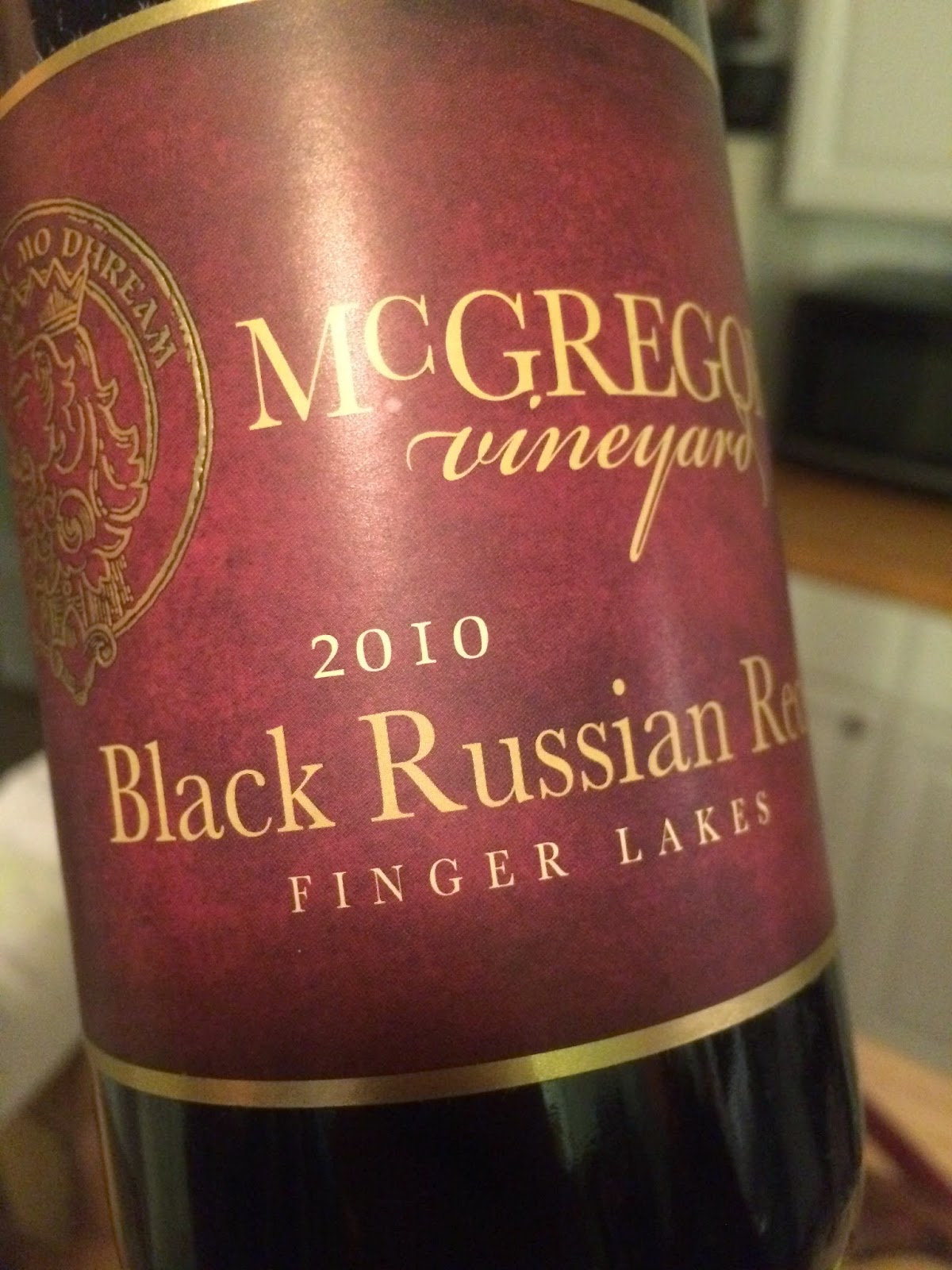 So a little while back, I went crazy and opened up a bottle of Black Russian Red. When I say I went crazy, I count it among some of my better bottles in my cellar. It's one of the most unique wines in North America, and it's a fun wine to pour for guests and talk about. And that's exactly what I did. We had pot roast. Not exactly sexy. It's not rack of lamb or crown roast or anything like that. But it was a very good pot roast. And I was eager to show something funky from my cellar. There is something mysterious about it. They are such unknown grapes, from Russia?!! How do you make a wine so famous from grapes no one's ever heard of? But yet, it's sexy good!

There's no question this is an exciting wine. Here's what Roederer Award-winning wine writer Evan Dawson said about it back in 2011 for the New York Cork Report:

The wine that is quite possibly the single most interesting wine in the Finger Lakes is turning 20, sort of, in 2011, and the McGregor family is throwing a party. (This is a family that really knows how to throw a bash.) Details on the event to follow, but first, let's lift the veil on a little history.
The McGregor Black Russian Red is, technically, older than 20 years. Bob McGregor spent the 1980s searching for the right blends and combination to unlock the potential in these unusual grapes — Saperavi and Sereksiya Charni. Today, you can still find an occasional bottle of 1991 Black Russian hanging around. It was the first recognized vintage of this blend, and if you're fortunate enough to find one, don't be surprised if it's still pretty darn good.

It's a story of innovation and determination, led by Bob McGregor and carried on by his son, John, and family. It is not a stretch to say that Bob was a trailblazer, because McGregor was one of the first to recognize what some Finger Lakes winemakers are only now recognizing: In an unpredictable cool climate region, sometimes you have to open your mind to find what truly works.

Bob McGregor had struggled with Bordeaux varieties. His early pinots made him happy, and earned the praise of a few writers, but Bob wanted that big, robust red to round out his portfolio. That was the goal. Cabernet was dying on the vine, literally, in the 1970s and 1980s. Bob McGregor's background pushed him to search for something different. 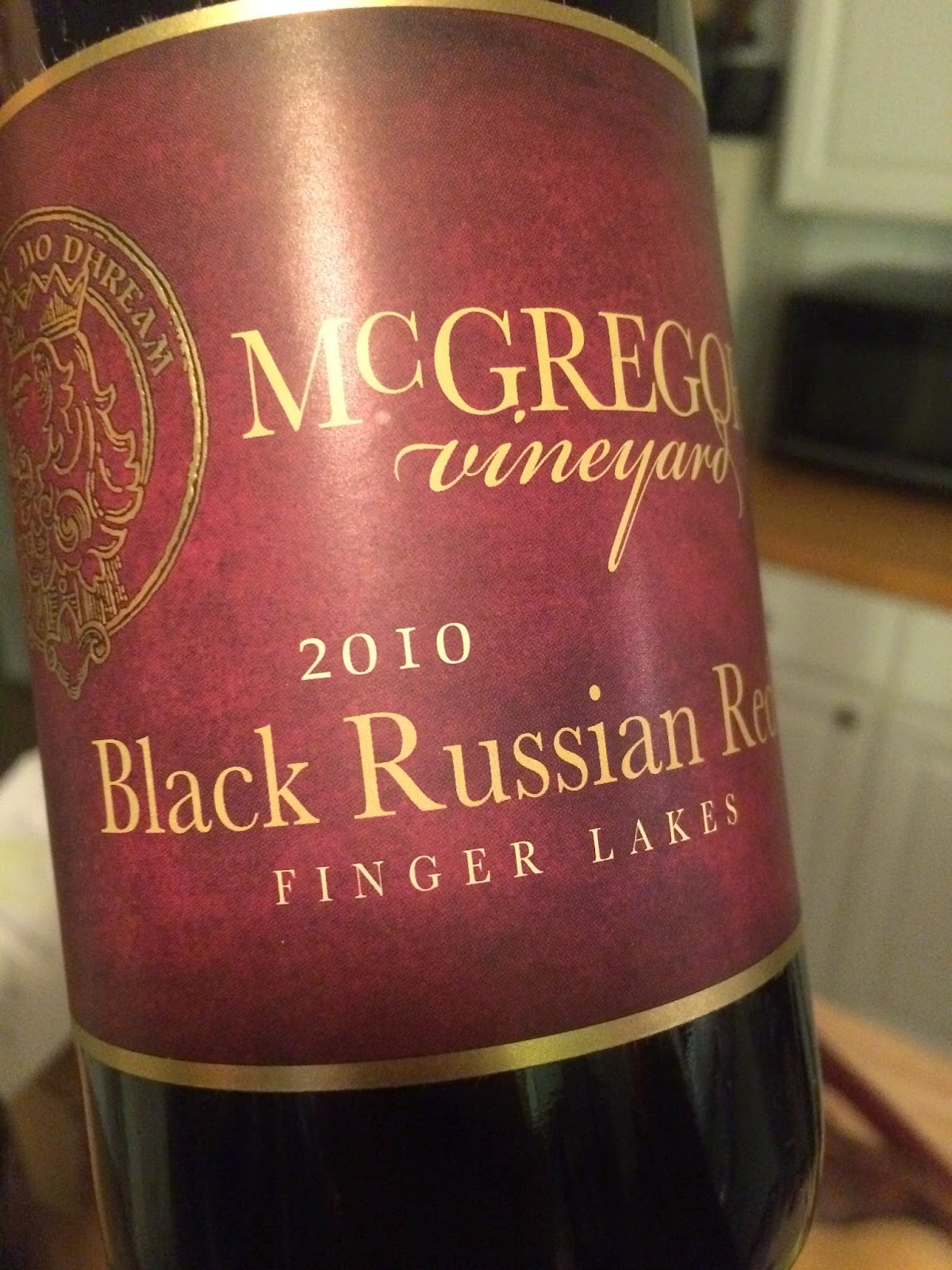 So what are Saperavi and Sereksiya?

Saperavi literarily mean in Georgian, "paint, dye" which is said to come from its intensive dark-red color. Saperavi red wine has been produced since 1886. Saperavi grapes produce substantial deep red wines that are suitable for extended aging (perhaps up to fifty years). Saperavi is a hardy variety, known for its ability to handle extremely cold weather; and is popular for growing in high altitude and inland regions. Saperavi wines have won numerous international wine competitions.

"The less common Sereksiya Charni (sereksiya chernaya) of Moldovan and Romanian origin, is grown throughout the Caucasus and Balkans. It makes for red wines typified by deep color, high acidity and a prominent fruity element," wrote Arthur Z. Przebinda for Palate Press.

McGregor Black Russian Red 2010 (376 cases produced) is a unique blend of 100% estate grown Saperavi & Sereksiya Charni grapes. The wine, released last May, is a dark red hinting at purple. A big nose of dark, dark cherry, plum, and a big punch in the nose of blackberry hit you. There's also hints of smokiness, earthiness, vanilla and mocha. All three come across on the palate. It's a big fruit bomb for the first second or so. Then the tannins an the complexity take over. This is a very subtle wine, with lots of gorgeous overtones. Well balanced and delicious. Impressive! Especially since it's made from grapes I have never in my life heard of!!!

But why trust me. Maybe you'd prefer Anna Lee Iijma of Wine Enthusiast who gave this wine 87 Points in May of 2014! Anna wrote, "Whiffs of ripe black cherries, vanilla and spice, along with delicate hints of soil and barnyard, mark this unusual blend of Saperavi and Sereksiya grapes. Tart black-fruit flavors accented with swathes of fresh herbs are a bit lean on the palate, but the acidity is gentle. It’s dry and easy drinking in style with smooth, gentle tannins."

Count me as yet another admirer to get in line.