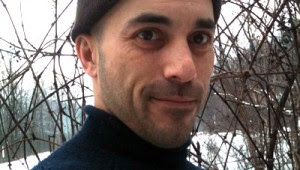 Foliage was just passing peak here at home when I traveled a couple of hours south for TasteCamp 2014, and though I may have been a little bit reticent to leave and miss out on the last of our leaves, the reward for the short drive was an amazing and beautiful passage through a neighboring wine country. It was a vintage autumn show of color this year and if you felt the need to extend your ogling adventure, the Hudson Valley was a ripe portrait of accommodating hues and views. It was also a welcoming place that generously received our motley band of beverage and eats geeks, showing us the inside of a scene, the secret of which, is quickly getting out.
The reference material says that the paintings of the Hudson River School are founded on the themes of exploration, discovery and settlement.  They portray the relationship of human habitation in the natural world in in a way that strikes a romantic balance between the rugged and the sublime. Overlooked or looked down upon during its early period, the quality of the works have ultimately withstood the scrutiny of connoisseurs over time.

It looked pretty much like this all weekend in the Hudson Valley. Thomas Cole would have been delighted.

I think that the libations of the Hudson Valley have experienced a similar arc and where at one time they may have been viewed askance or seen as rough around the edges, they are now getting the appreciation their craftsmanship truly deserves. Over the course of less than seventy-two hours, we certainly explored much more ground than we expected, met with many happy discoveries, settled on the fact that this place was for real, and we tasted more than a few things that touched upon the sublime.

Our first stop was a Millbrook Winery, located nearly equidistant between New York City and Albany.  Consistently named the Best Winery in the Hudson Valley…as Carlo DeVito said, “they do it right.”  Well appointed facilities that retain rustic charm, attention to detail in the vineyards, and high-class wine making set the stage for very positive tasting room and event space experiences.  Their Tocai Friulano is one of a kind and a real pleasure to drink. I should have bought more…


Millbrook treated us to a tour, a tasting of their wines and the Seyval Blancs of Clinton Vineyards, as well as a lovely buffet lunch in their fantastic old barn space..

Phylis Feder - Clinton Vineyards and a spectrum of Seyval Blanc - still, sparkling and dessert. She favors a dash of Clinton's raspberry dessert wine in the Sparkling Naturel. A Hudson Kir Imperial?

We followed up our first stop with a visit to Ribibero in New Paltz who are the new kids on the block. Tiffany Ribibero and her husband Ryan Selby stepped up to the plate when the winery renting the property owned by Harry Ribibero vacated to a new location. The family dream of running a winery themselves took shape and they recruited well known Hudson Valley wine maker Kristop Brown to join the team, and things have been expanding since.

Ribibero Family Winery- Quite the variety for a little winery. The "87 North" white blend is a crowd-pleaser and their biggest seller. The Arctic Riesling was exotic round and tropical with acidity mellowed by barrel time.

Cabernet Franc is rocking the Hudson Valley. It may not yet be the “official” red grape of the region, but it seems pretty clear that this particular vitis vinifera likes it there. It buds a bit later than Cabernet Sauvignon, which can be a safety play against spring frost, and it manages to hang well into the autumn giving producers every last heating degree day they can manage to gain before the leaves fall.  We tasted quite a range of expressions across the various wineries and one could do an entire Hudson Valley tour just to log the comparatives.


Brotherhood Winery had just celebrated their 175th Anniversary the night before we arrived. They are the longest continuously operating winery in the country and one of New York State’s largest producers.

Sparkling Chardonnay that tastes this fun for $10-11...would fuel a lot of holiday parties, if you can find it.

Whitecliff crafts delicious wines on ground within view of shawangunk rock faces...northernmost ridge of the Appalachian mountain chain - quartz pebbles and sandstone cemented by silica exposed by the last glaciation.


We finished our first day with a stunning view and a hearty, congenial home made chili dinner at Whitecliff Winery, while tasting their Gamay and their equally lovely although more muscular Cabernet Franc.

Whitecliff Vineyards Gamay was a crowd favorite and we've already opened the one I brought home. Vigorous fresh splash of reds fruits - cherry, strawberry, raspberry - serious salivary reaction, and a long light follow-through. Screams for crispy fatty roast beast or earthy harvest veggies. I still have a Cabernet Franc in the cellar.


Our itinerary offered us a fairly respectable bedtime with enough shut-eye to leave a span for a solid breakfast at the Saugerties Diner. This would be a necessity because we had a big day ahead of us and the first stop would be a doozie.
Day 2

Hillrock Distillery is a self-contained farm-to-glass establishment that is purpose built with the singular notion that whiskey can convey a sense-of-place. Our whole party may have experienced a mass hallucination ( it’s possible…the rye, bourbon and whiskey were that good ), but I’d say we all tasted something extremely unique that day…”the writing of clove and cinnamon” in pure distillate, as expressed by the hills surrounding the malt house.

This impressive still at Hillrock is reported to have taken 1000 labor hours to manufacture.

I’m going to leave the details of the Hillrock visit to the real aficionados, so I suggest that you read Evan Dawson’s New York Cork Report Article - “Terroir in Whiskey?” and Todd Godbout’s “Discovering Hudson valley Spirits Part 1″.

Ashley Hartka - Harvest Spirits - sampling us on some fruit infused vodkas including a super tasty and fleshy peach.

As promised there was quite an array of fine distillates for the sampling, but knowing it would be a long day, I visited just a few producers, one of which was the super bright couple at Harvest Spirits who I’d met earlier this year while visiting Carlo. Their handiwork inhabits a nondescript warehouse building within a rambling orchard farm complex in Valatie, NY.  A humble steel exterior camouflages the oak capsuled treasures within. Derek Grout & Ashley Hartka make and offer Apple Jack, aged grappas, fruit infused brandies and a gorgeous pear eau-du-vie.
Top notch stuff and very reasonably priced with the Cornelius Apple Jack retailing at about $35-40 for a 750ml and the other more esoteric sips like the pear brandy costing less for the 375ml. Be forewarned, the batches are small, so check it while you can and follow up fast if you find something you like.  This is impressive artisan distilling in action, and I recommend getting some if you are in the area.
Here’s a quick bit of video taken back in the spring. I need more of the pear brandy and must go back.

Dominique DeVito arranged a delicious lunch spread for the group to enjoy while tasting ciders and fruit wines from the Hudson Valley.

I was very glad to see Gerry Barnhart from Victory View Vineyards representing for the Upper Hudson Valley, north of Albany. His cold hardy Marquette is a serious full bodied Grenache-like wine that packs more power than many of the traditional vinifera reds grown two to three hours south of him in the NY banana belt . The Victory View Marechal Foch also turned some heads.

There were a number of fine ciders to taste that were built for modern markets but the farmstead wild foraged pours from Aaron Burr stood out as links to the drinks of our colonial heritage. Ethereal fruit notes upon earthen and skin bitter backbones remind me a lot of the Fable Farm Fermentory ciders back home in Barnard, VT.

Fruit wines should not be overlooked as lesser beverages. They shine as aperitif, desserts, and as mixilogy components. I was enchanted by the Clinton Embrace and immediately understood Pylis Feder's affection for this raspeberry dessert wine.

Who knew so many black currants were grown in the Hudson Valley?


I have a liking for Cassis and enjoyed tasting through this spread immensely. My business partner spent an extended period in Burgundy and brought back a number of liqueurs and cremes de cassis that when mixed with marc or grappa were exquisite. Glorie’s Black Currant wine had the classic green herbaceous notes that I know from my own bushes at home. The Hudson-Chatham Paperbirch Cassis was nicely balanced and tilted towards its purple tannins. American Fruits Black Currant Cordial was juicy and tart and I imagined it would do something quite  interesting in a Currant Cosmopolitan.


The Tousey Creme de Cassis knocked my freaking chausettes off. It surpassed any of the imports I’ve enjoyed. The secret? Four different varieties of black currants and honey from Ray Tousey’s own bees. Yet one more example of how my horizons were expanded quite broadly, in the Hudson Valley.

While some of our TasteCamp crew availed themselves of the rented bus to visit and ransack a local establishment for their stock of locally produced beverages, the rest of us loitered around the Hudson-Chatham Winery and enjoyed a sampling of the establishment’s soon-to-be-released selections of their famous Baco Noir. Carlo DeVito and his winemaker Stephen Casscles have something going on with these wines. Red wines that are light in weight, intense in flavor, and eminently friendly with cuisine of all kinds. Yes the amazing “Old Vines” version come from the Finger Lakes, but the local expressions are maybe a bit less concentrated but equally intriguing.  It’s an affirmationof the opportunity of the Hudson valley that they can grow both cool climate vinifera and cold hardy hybrids. They may be producing the best of both worlds.

Yes! More Hudson Valley Riesling PLEASE! Ben Peacock stunned us with a flight of dry and semi-dry estate grown wines. Broad, energetic and friendly expressions of Riesling that were absolutley unique. Not as slicing as Finger Lakes versions, these forced me to recognize a new bar on the Riesling spectrum. Do the NYC somms know about this yet?

TasteCamp is a whirlwind, for sure. It’s not meant to be comprehensive but it is most certainly informative and eye opening. Why more groups don’t meet like this, I’m not sure. I do agree with Richard Auffrey, The Passionate Foodie’s “Rant” because I think the format is a great one. It does take a significant amount of volunteer organizational effort to accomplish some semblance of success, and we attendees understand and appreciate that very much. I’d say that this year, the win for all was resounding, and that many of us will be back in the Hudson Valley, sooner than later, to take another pass at this historical region which is knocking on modernity’s door.
Read more from Todd:
http://www.vtwinemedia.com/vt_wine_press/hudson-river-schooled-tastecamp-2014/
Posted by Carlo De Vito at 4:43 AM