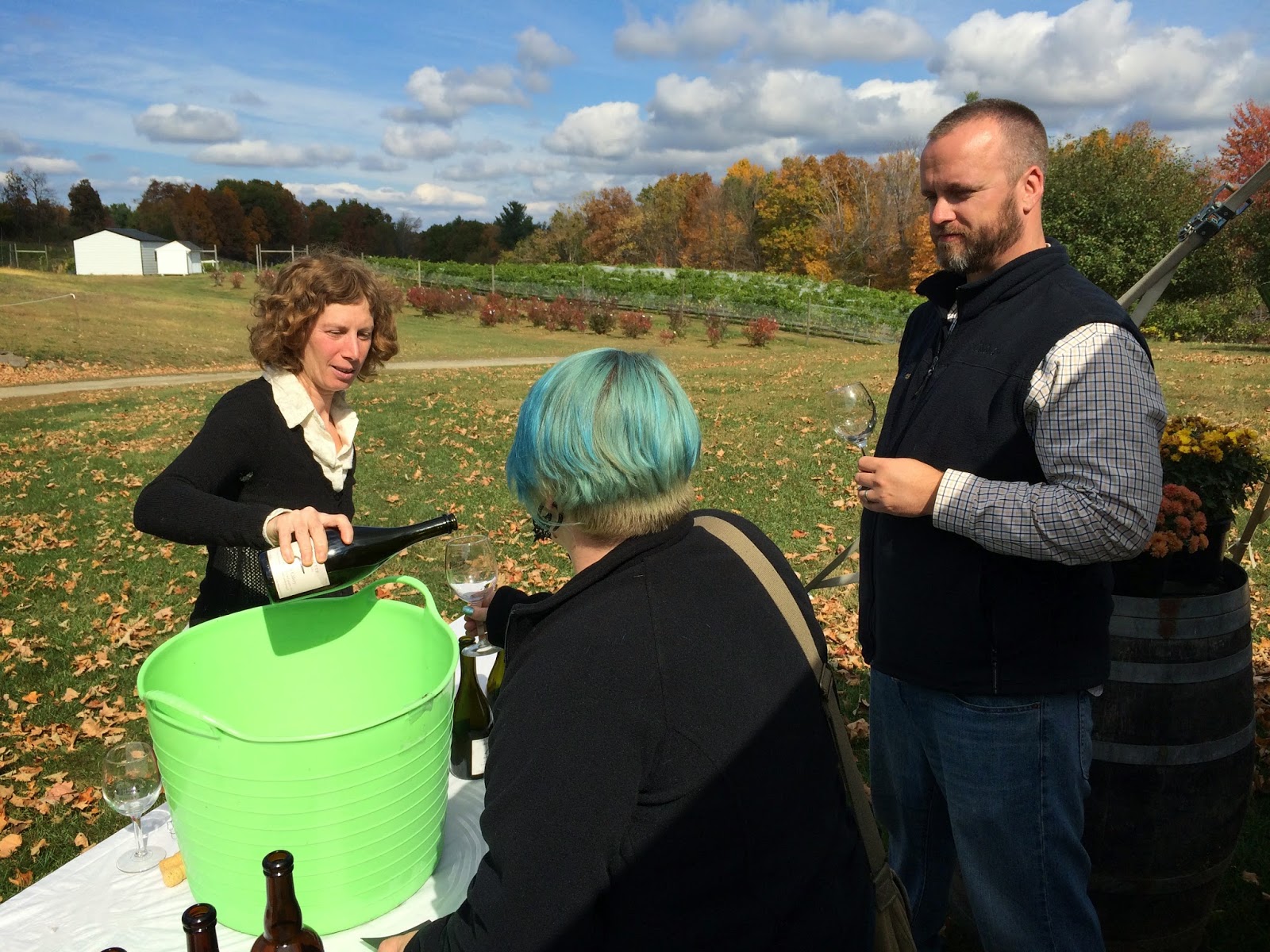 In mid-October, 15-20 wine writers and bloggers came to the Hudson Valley to taste wines, spirits, and ciders. One of the surprise hits of the adventure was the cider tasting. This was a big thing for the Hudson Valley. While cider has become more and more popular around the US, the Hudson Valley is certainly the epicenter of the cider movement in New York state. The Hudson Valley has more cideries than anywhere else on the east coast, with Virginia coming in right behind them. Here are TasteCamp founder Lenn Thompson of the New York Cork Report and Demtra Molina of The Boozy Life of a Tattoo Wife wine blog. 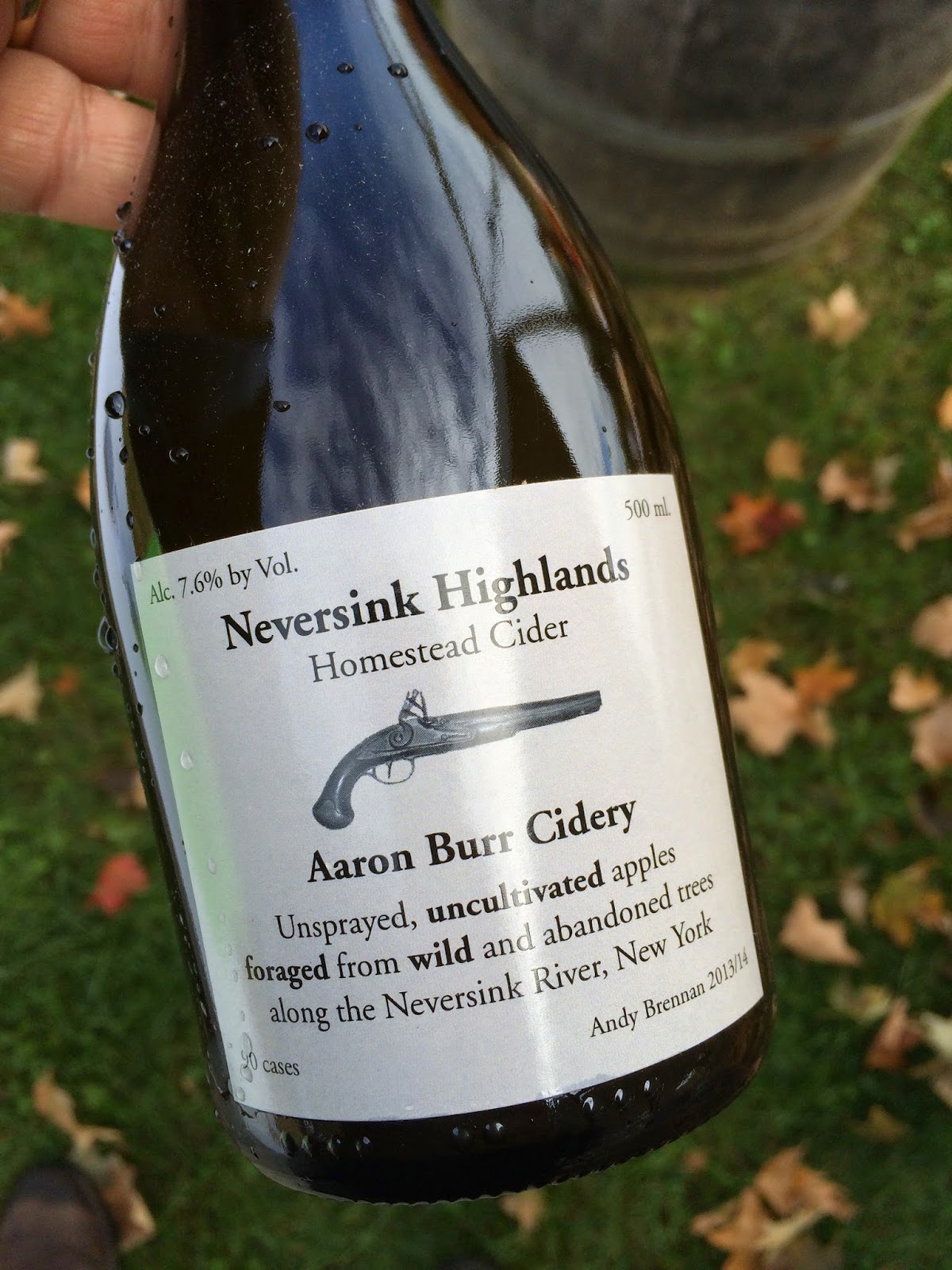 The next most amazing thing about the tasting was the indisputable fact that not only are there many cideries, but there are so many styles as well. Some were made for the popular taste. Some wee straight up traditional. Some were flavored. There were numerous dry styles, harkening more toward English and French ciders. And still others were aimed at foodies, and others were on the cutting edge. One imagines eating oysters with some of their dry styled-ciders, or pheasant stew with dumplings. 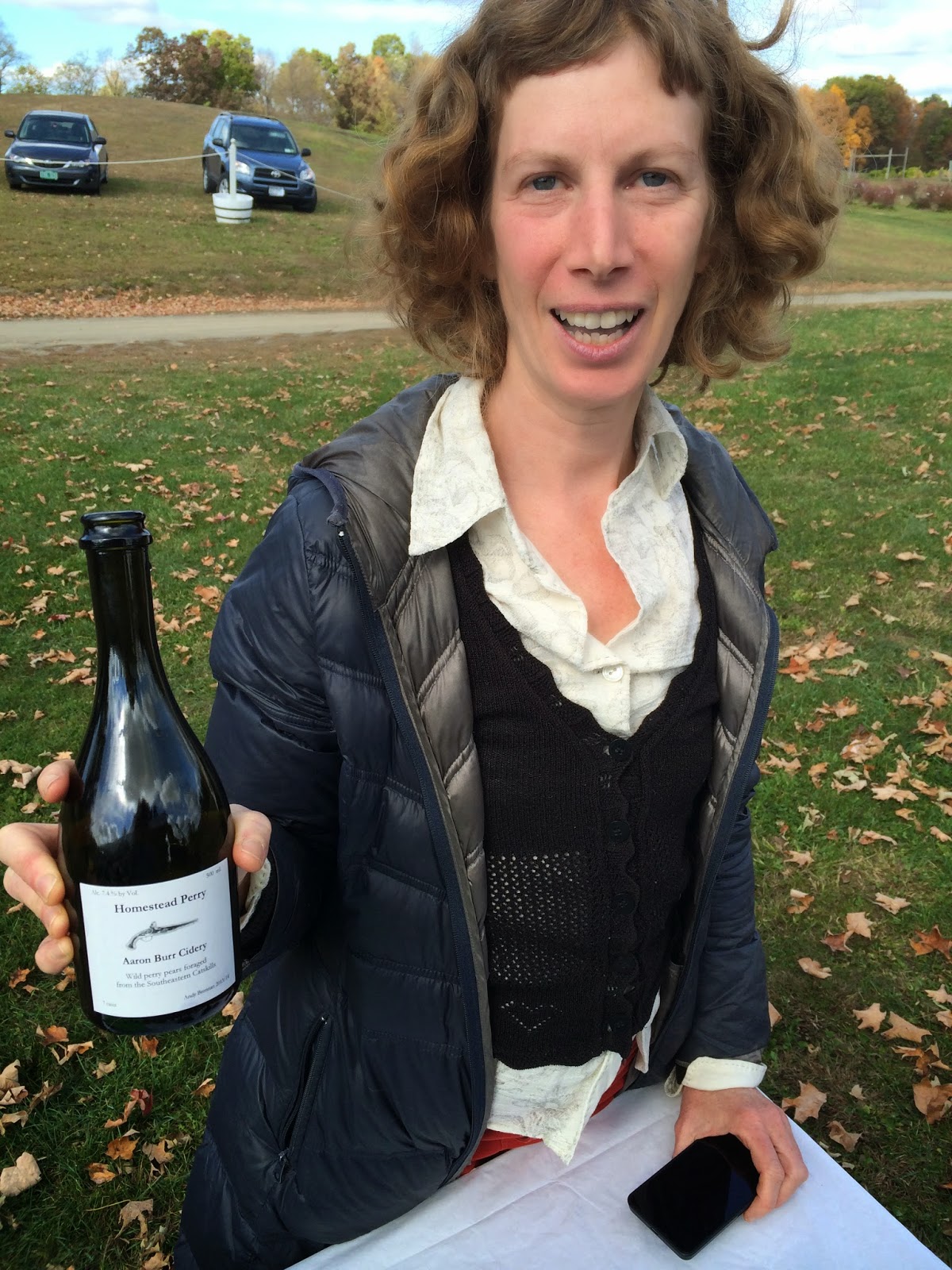 Aaron Burr, long the foodies favorite, was there and made an immediate impression on the crowd, with their foraged apples and artisanal bent in fermenting unique products. The cider are made by the  Andy Brennan and wife Polly and based in Wurtsboro, NY. Aaron Burrs ciders are a hit with foodies because they are almost more sparkling wine than quaffing ciders. They are fantastic with cheeses or a gourmet meal. 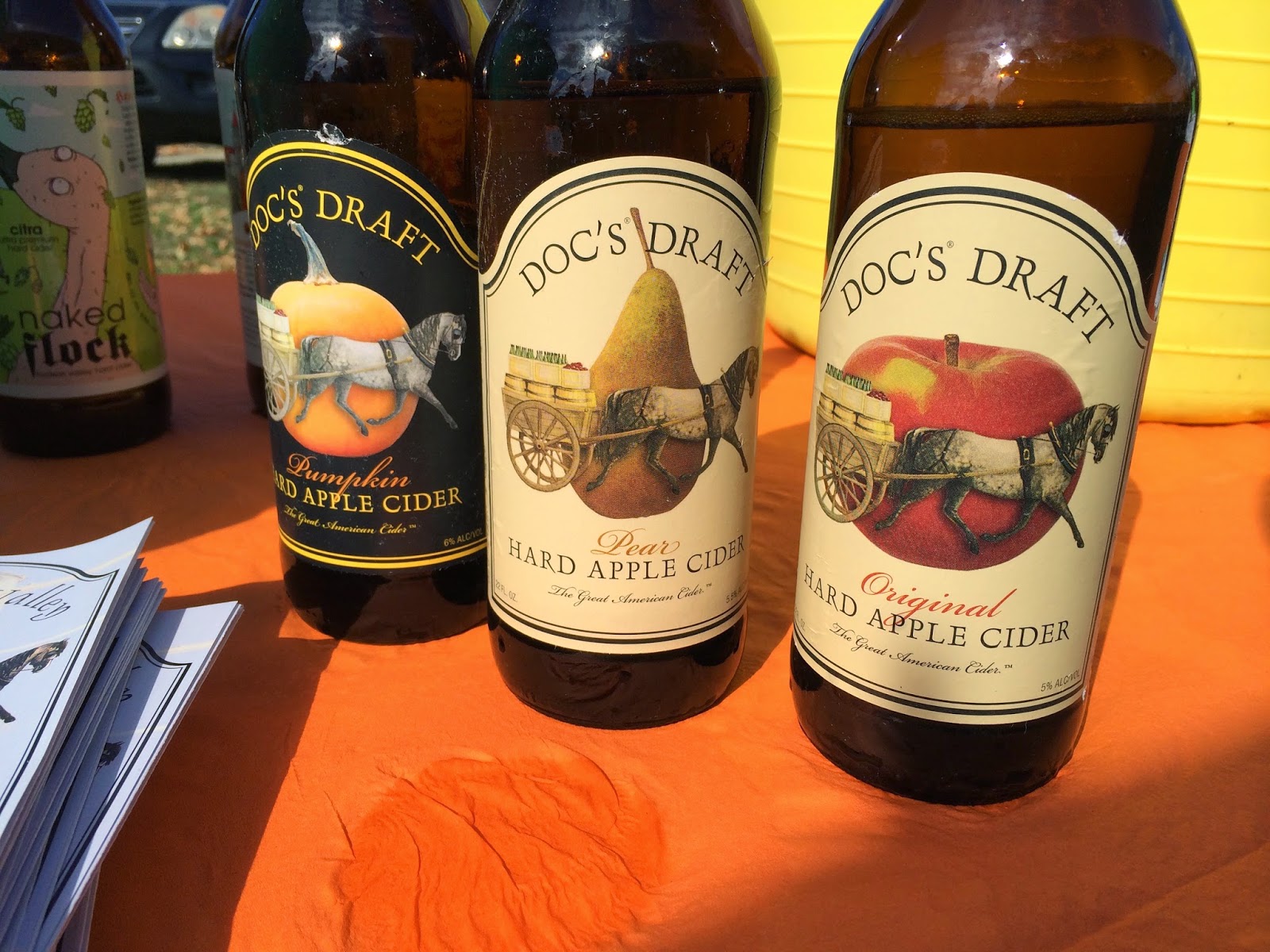 Jason Grizzanti and Jeremey Kidde have built Warwick Valley Ciders and Distilling into an east coast powerhouse. They make great quality cider, that's consistent and lovely. Jason was among the first of the true cidermakers to set up shop and attempt to popularize cider in the Hudson Valley. Long before it became the popular drink it is today, Jason was traveling to France and Spain and other exotic locales to see how other regions produced the product. With Kidde joining him, the two have literally made history in the valley. 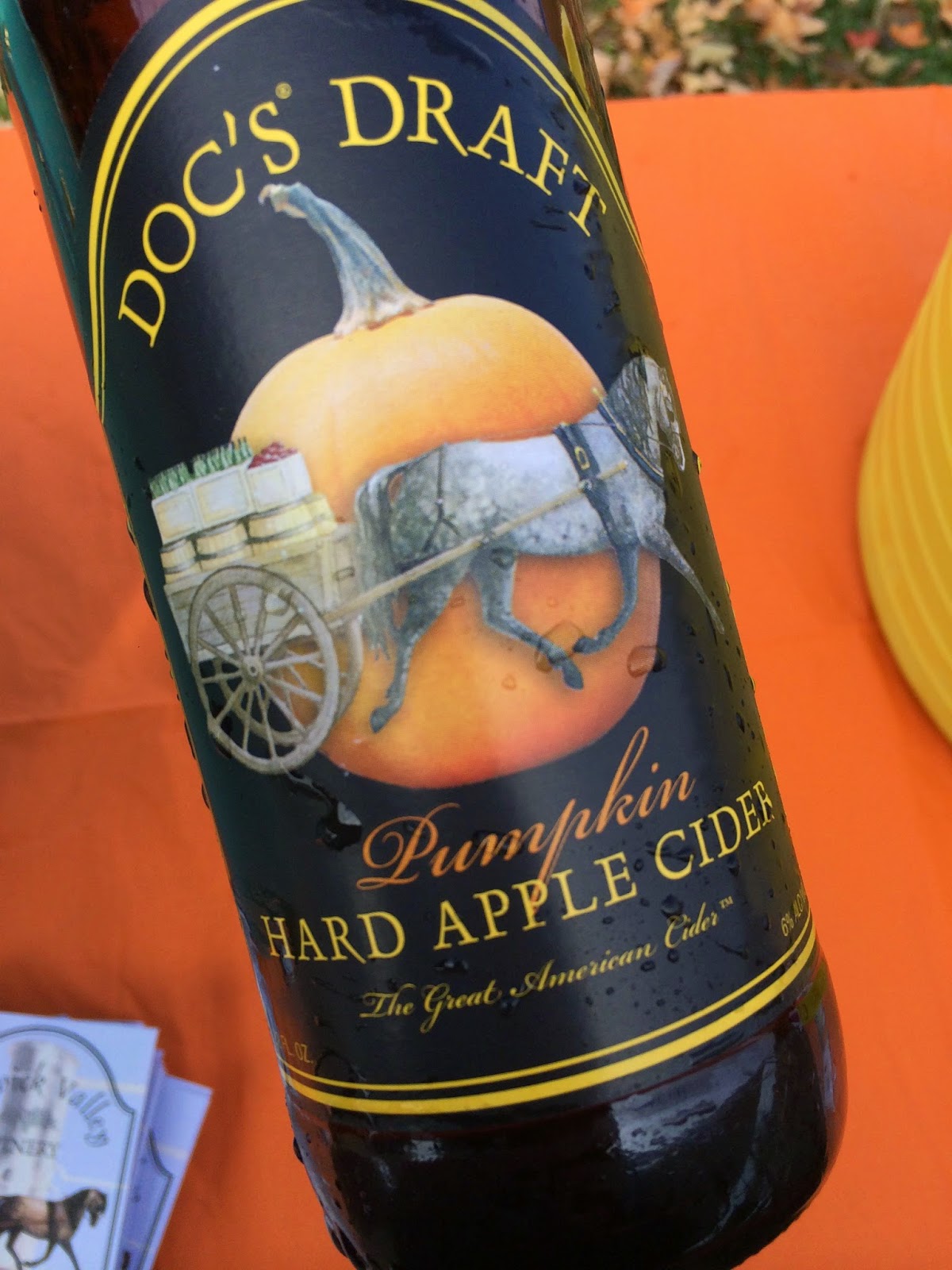 Warwick Valley's Doc's Draft was there as well. Doc' Draft is one of the most popular brands of cider from the east coast to the Mississippi. It's this product that makes Warwick Valley one of the largest wineries in New York state. Certainly its largest cidery. They make a wide range of styles, from crowd pleasers, to more exotic flavors, to hopped ciders. Always quality products. A solid hit with the writers. They're pumpkin cider was actually very lovely and perfect for the up-coming holidays. And their pear cider (known as perry) is easily one of the best on the east coast - hands down. 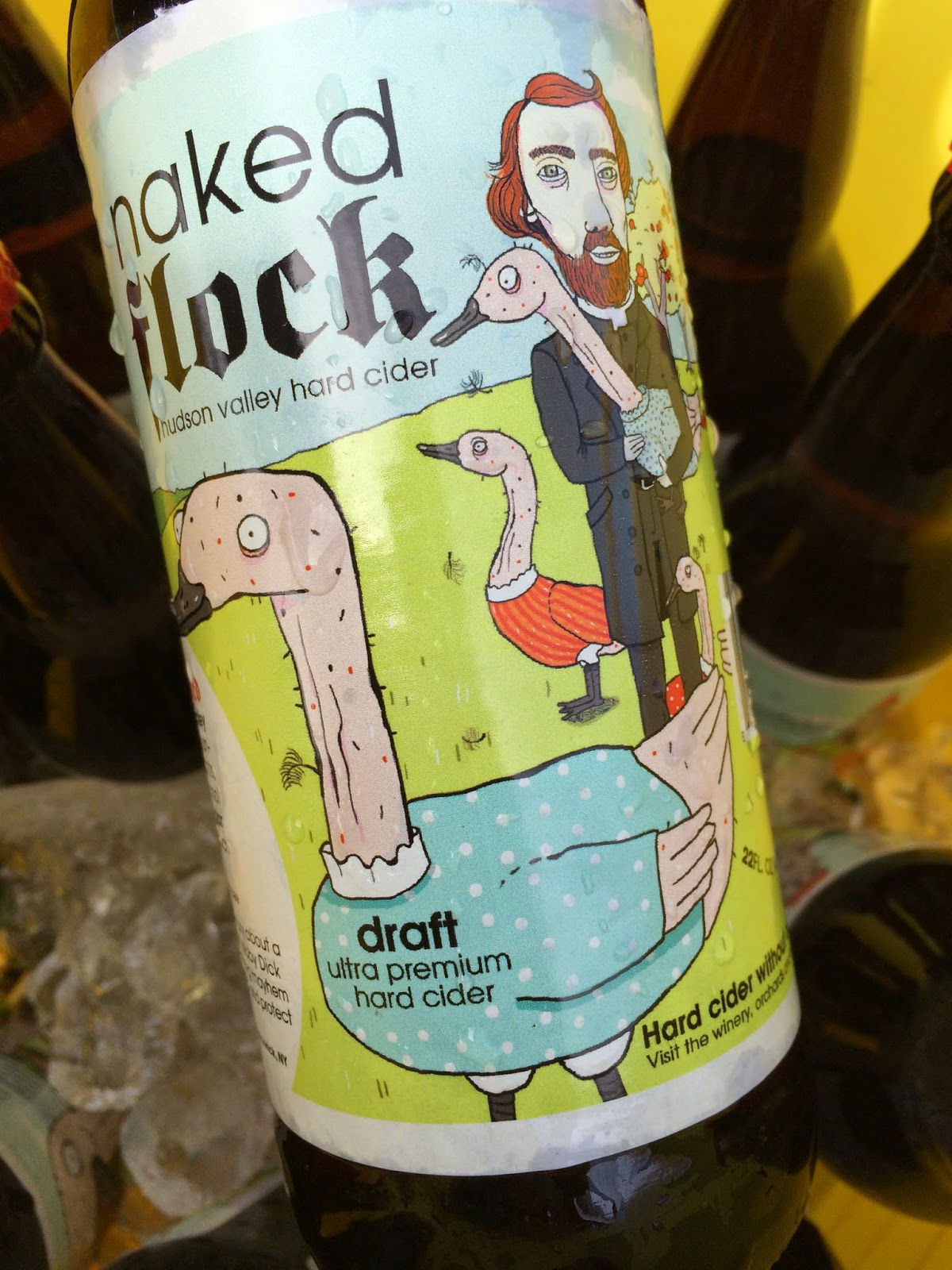 Since it's introduction Naked Flock has been a whirlwind of excitement. Naked Flock from Applewood Winery, make a wide array of  ciders, from semi-sweet crowd pleasers, to dry hopped ciders, to one of the best pumpkin flavored ciders I have ever tasted. Jonathan Hull and hi family have produced an exceptional line of ciders that are always pleasing and appeal to foodies and casual fans alike. 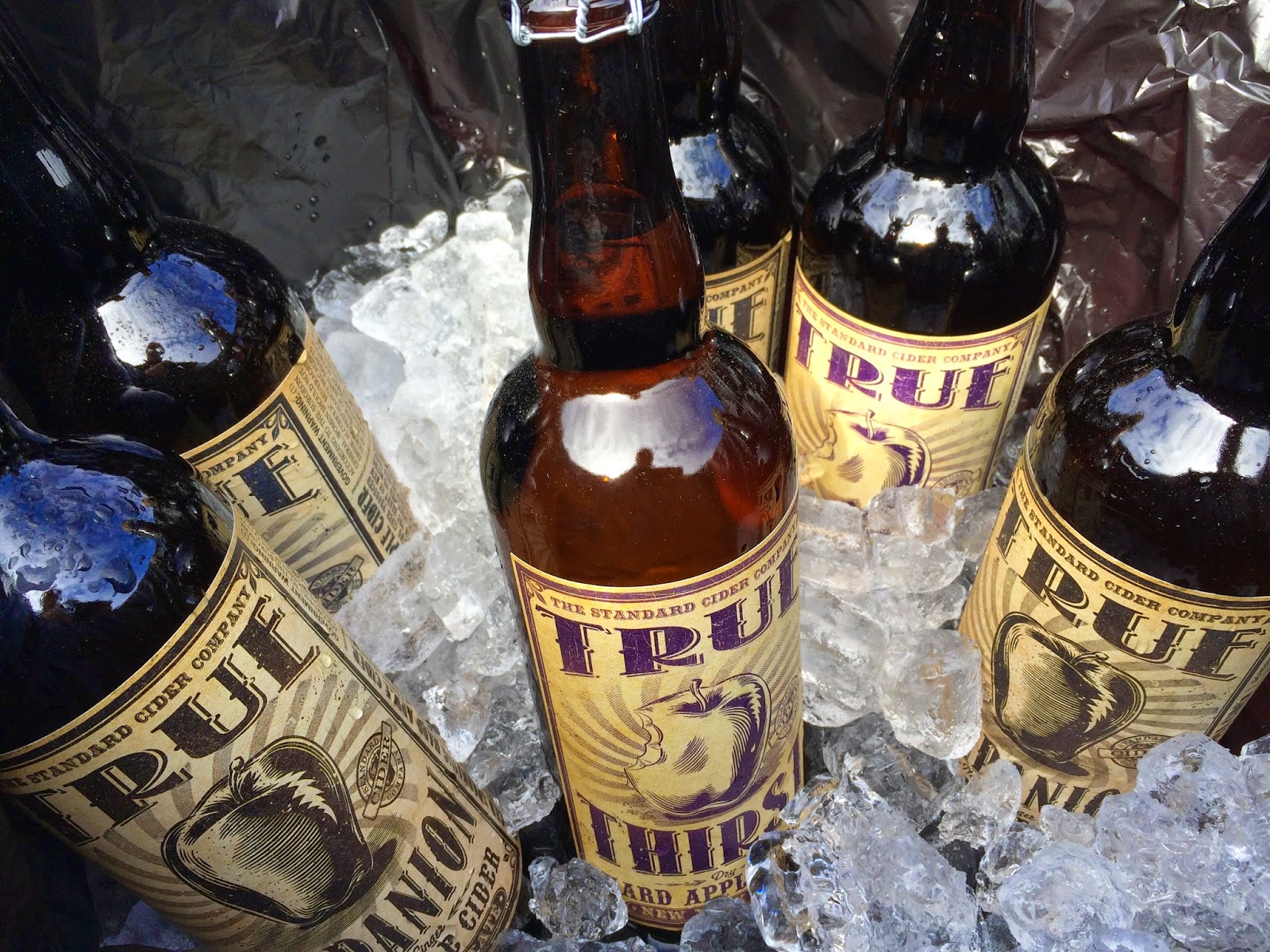 The Standard Cider Company makes the series of popularly aimed, quaffable ciders, aimed to please the casual cider drinker. Some are more exotic, edging towards dry. They are extremely good, and great with barbecue and grilled foods, as well as with a slice of apple pie and a wedge of cheddar. Cellar Master Bob Barrow does an exceptional job making this delicious line of wonderful ciders. 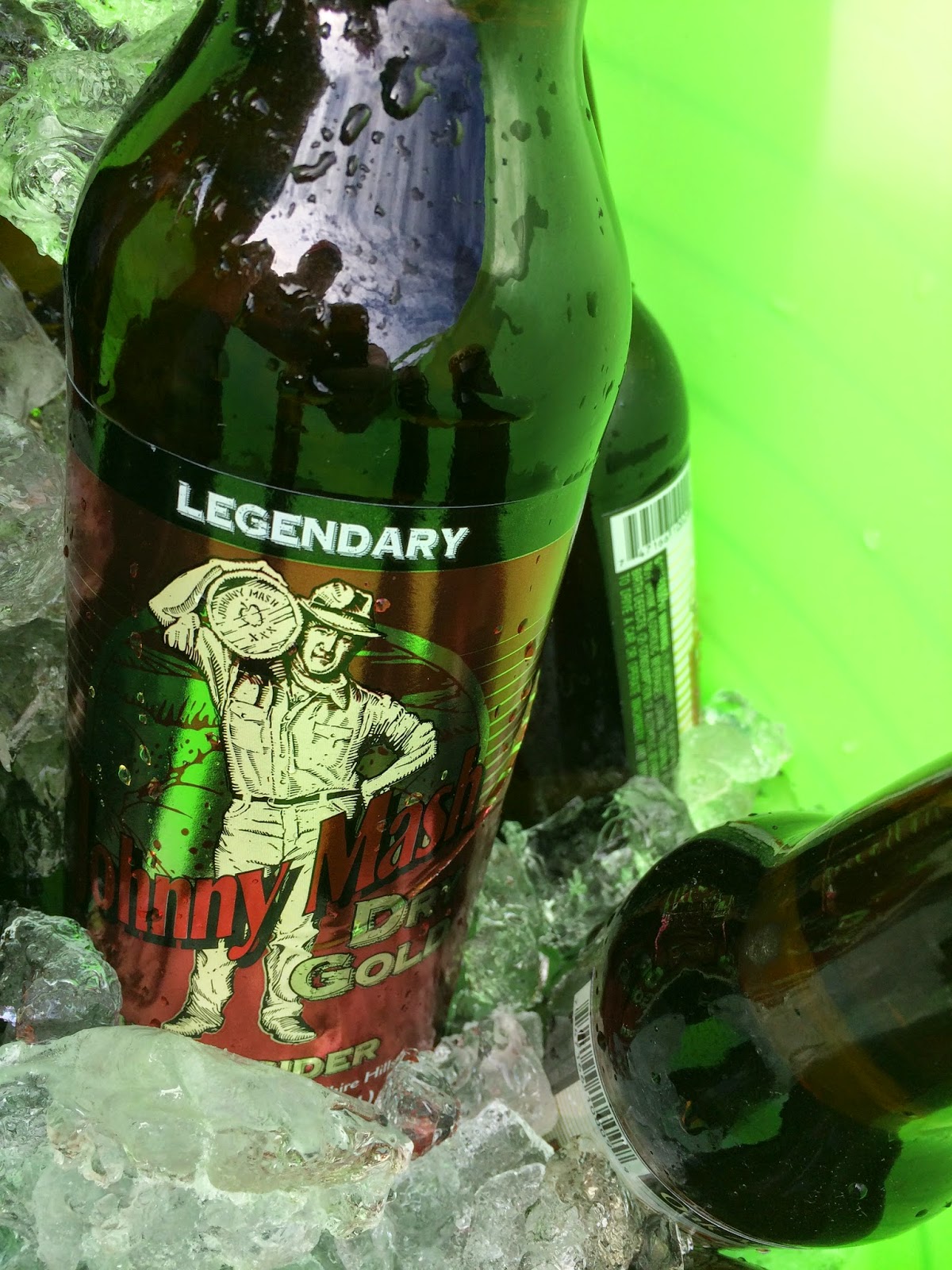 Furnace Brook Winery produces three or four ciders, from the ever popular Johnny Mash (sold in six-packs) to their classic French and Farmhouse ciders sold in sparkling wine bottles, this producers continues to draw fans from their home base in the Berkshires, on the state line bordering New York. A member of the Hudson Berkshire Beverage Trail, they produce some absolutely lovely products that have been favorites for more than a decade. 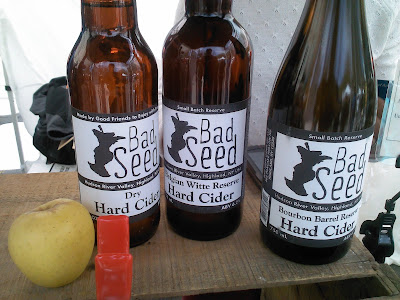 Bad Seed Cider continues its march toward fame. These cutting edge ciders from two beers guys turned cidermakers are what pushes the outside of the envelope in he cider marker. With their ciders like Belgian Witte, and Bourbon Barrel Aged cider, they are constantly impressing cider aficionados, as well as pleasing a more popular palate. Always amazing. They of course wowed the "Campers." 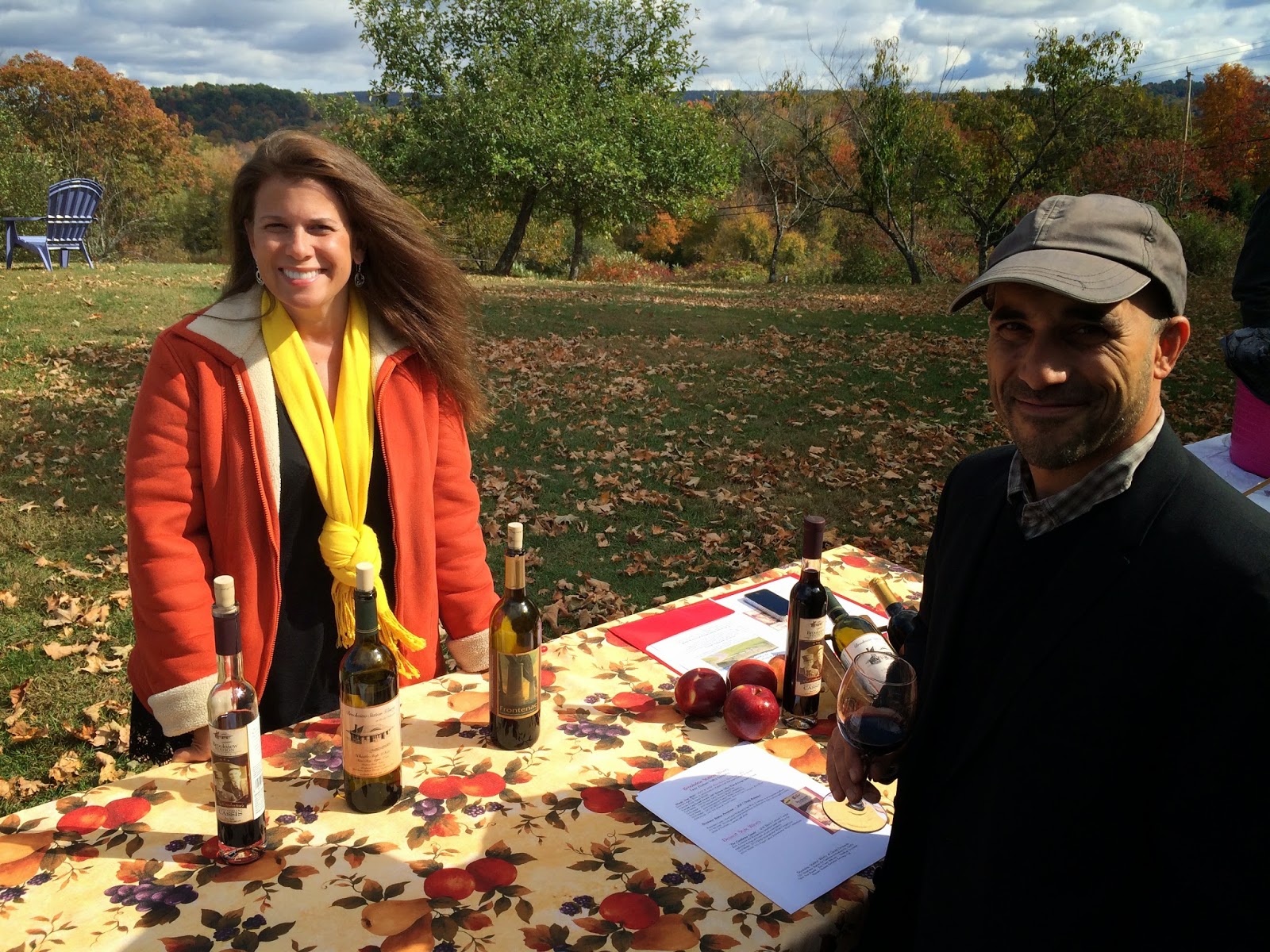 Popular New York and New England blogger Todd Trzaskos was on hand to sample the wares. Here he is with Brookview Station. 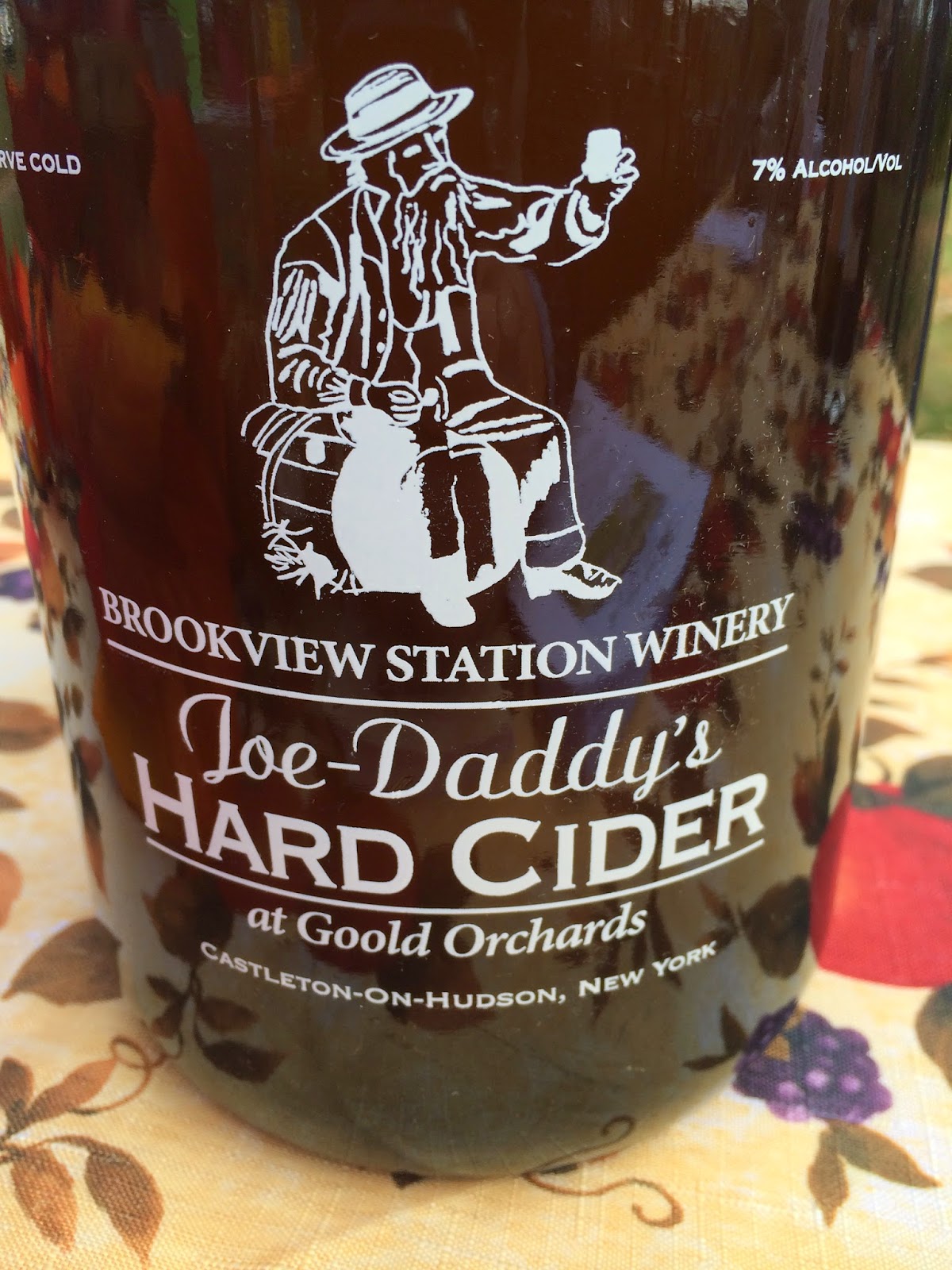 Brookview Station Winery is based at the Centenary Family Farm Goold's Orchards. Produced from their own apples (they make HUGE quantities of sweet ciders of a few major chain within the region) their hard cider is a popular new addition to their winery line up. Sold by the growler, it's as popular as ever. 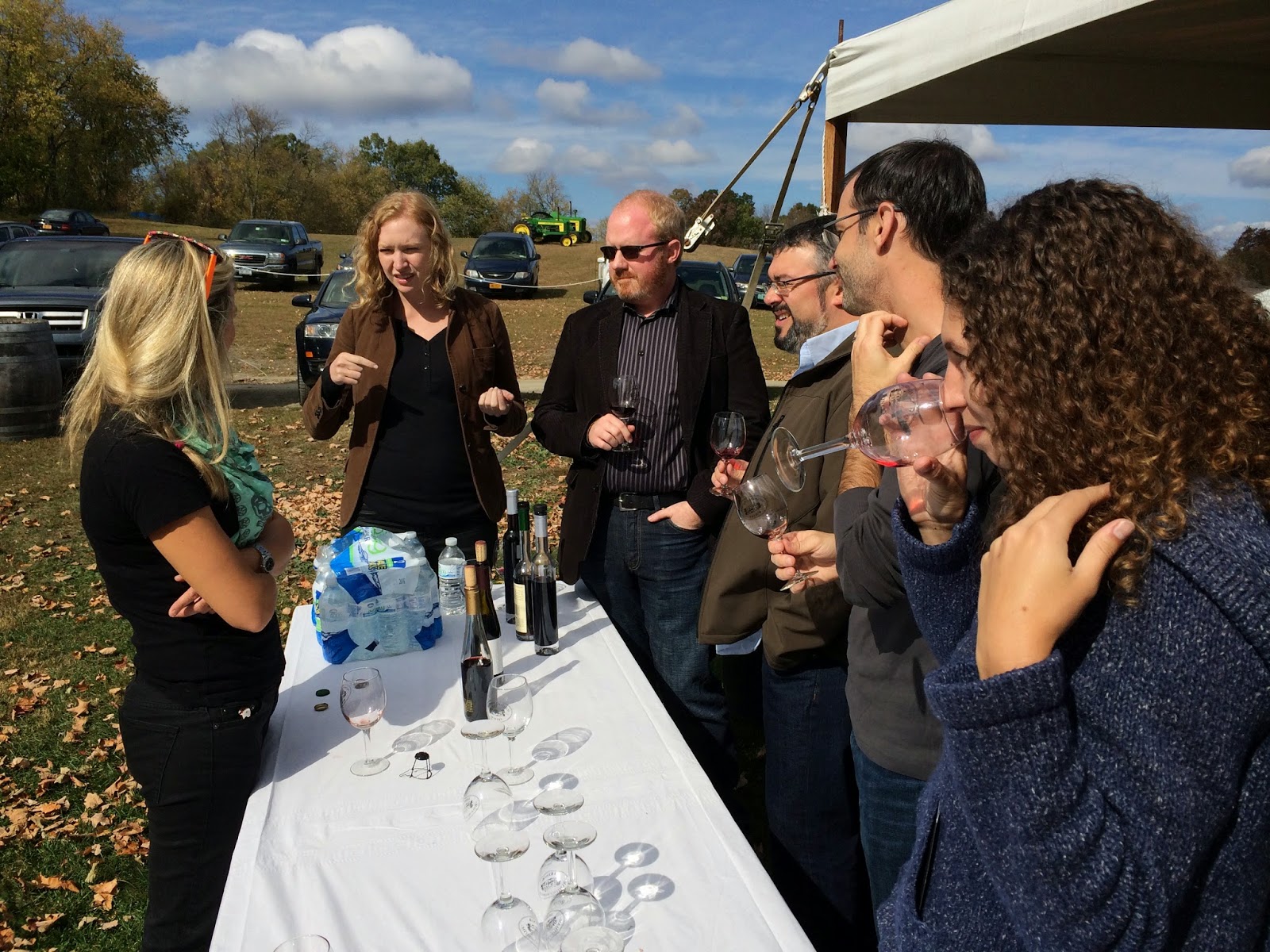 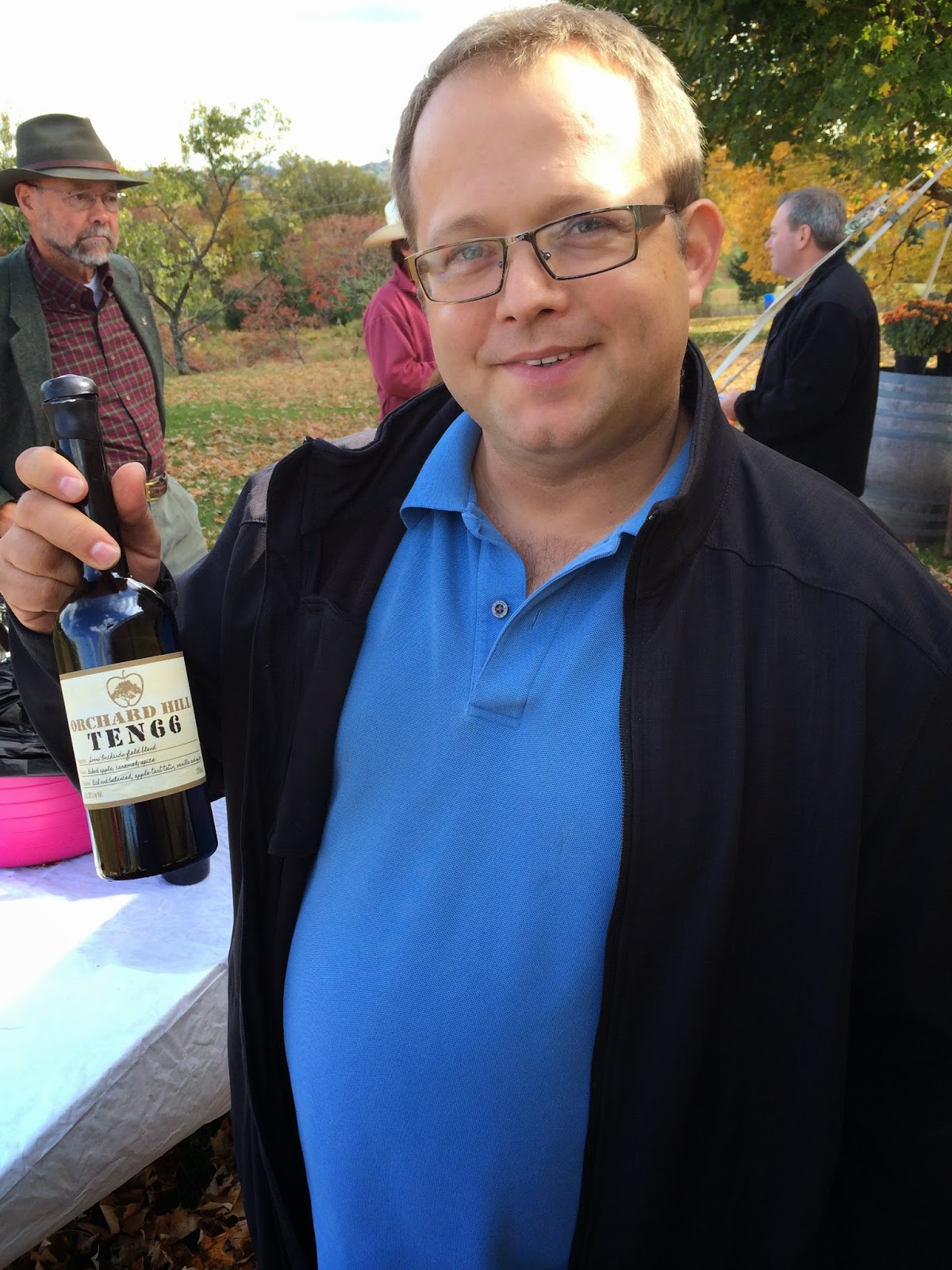 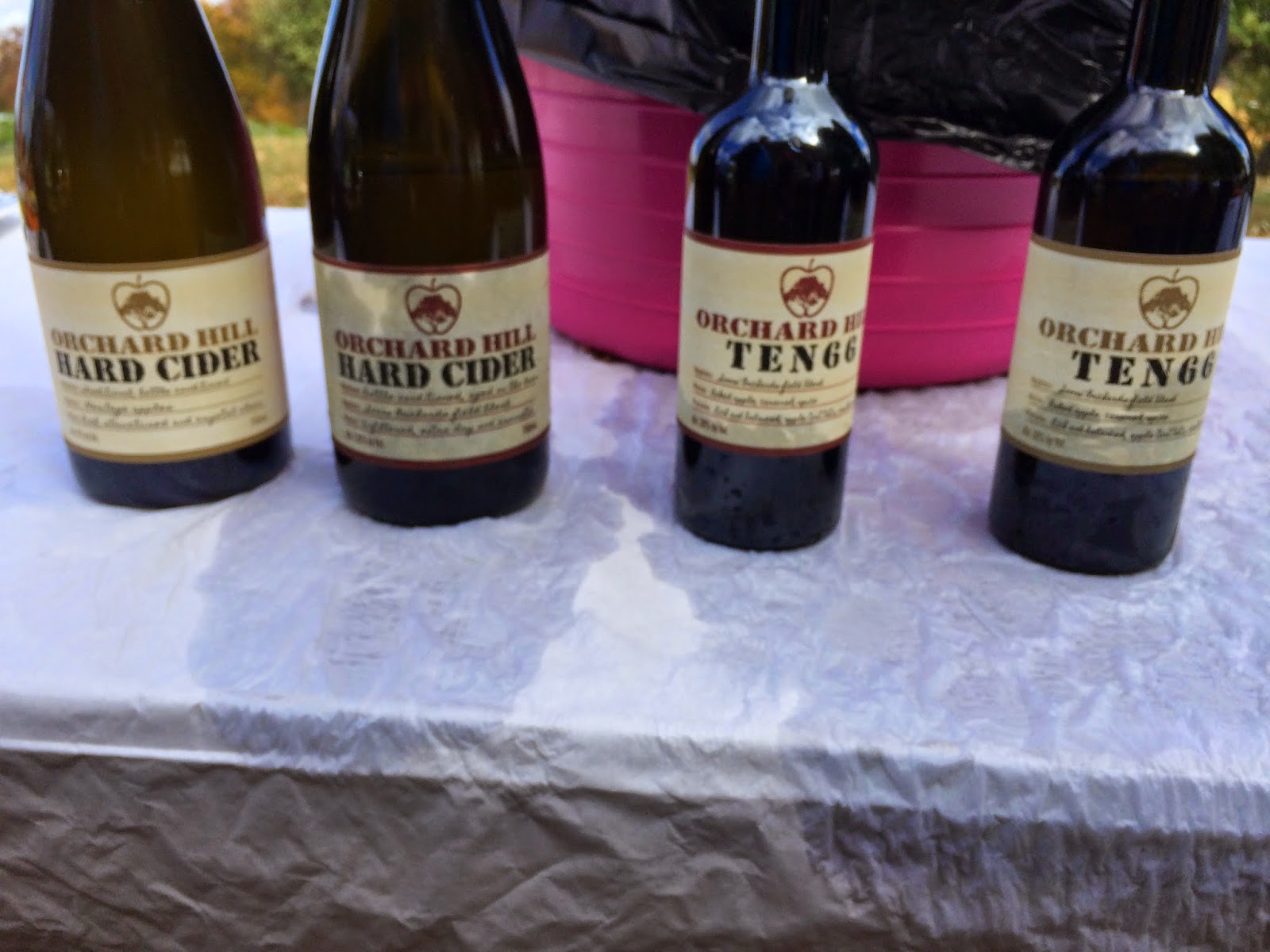 Orchard Hill Hard Cider was there as well, and was an instant hit with the "Campers". They produce a classic semi-sweet that's an instant crowd pleaser and a fabulous dry cider that drinks like classic sparkling wine. Fantastic. They had two pommes which they named TEN66. These were easily one of the biggest hits of the day. These are very sweet cider where in apple spirits (also known as applejack) are added to stop fermentation, usually on the sweet side. But the elixir is intoxicating. Beautiful stuff! 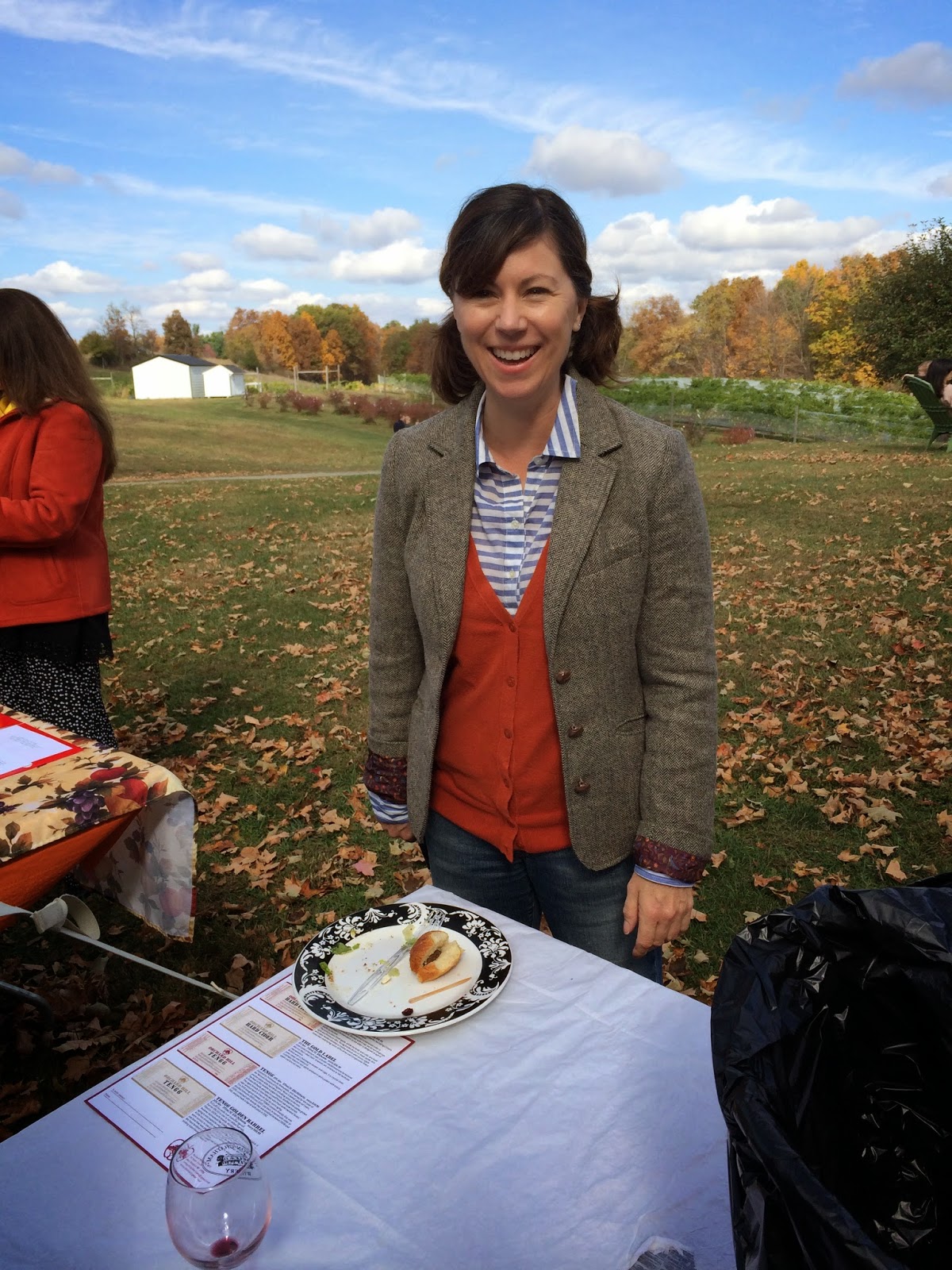 Famed mixologist and now Hudson Valley cider maven, the ever ubiquitous Kelley Slagle was on hand to pour for the Campers an answer questions for many. Her Farm to Glass Tours are becoming more and more popular in the upper HV, where she escorts vans lad of curious tasters to meet with the producers and try their wines, beers, spirits and ciders with the producers.

I think the real take away from Taste Camp was:
1. There's real power behind the push of cider in the Hudson Valley.
2. They are making crowd pleasing ciders for many palates.
3. The Hudson Valley also has some of the most cutting edge cider makers on the east coast.
4. That there was a wide array of palates from easy-to-drink, to the more foodie oriented ciders, meant to pair with farm-to-table cooking that is so much the vogue.
5. It certainly seemed to me that cidermakers in this tasting deserved to be seated near any of the better winemakers in the region or state. Cider has more than earned its way to the table.

There are more and more reasons to drink cider. And this tasting more than made the case why it should be Hudson Valley cider.