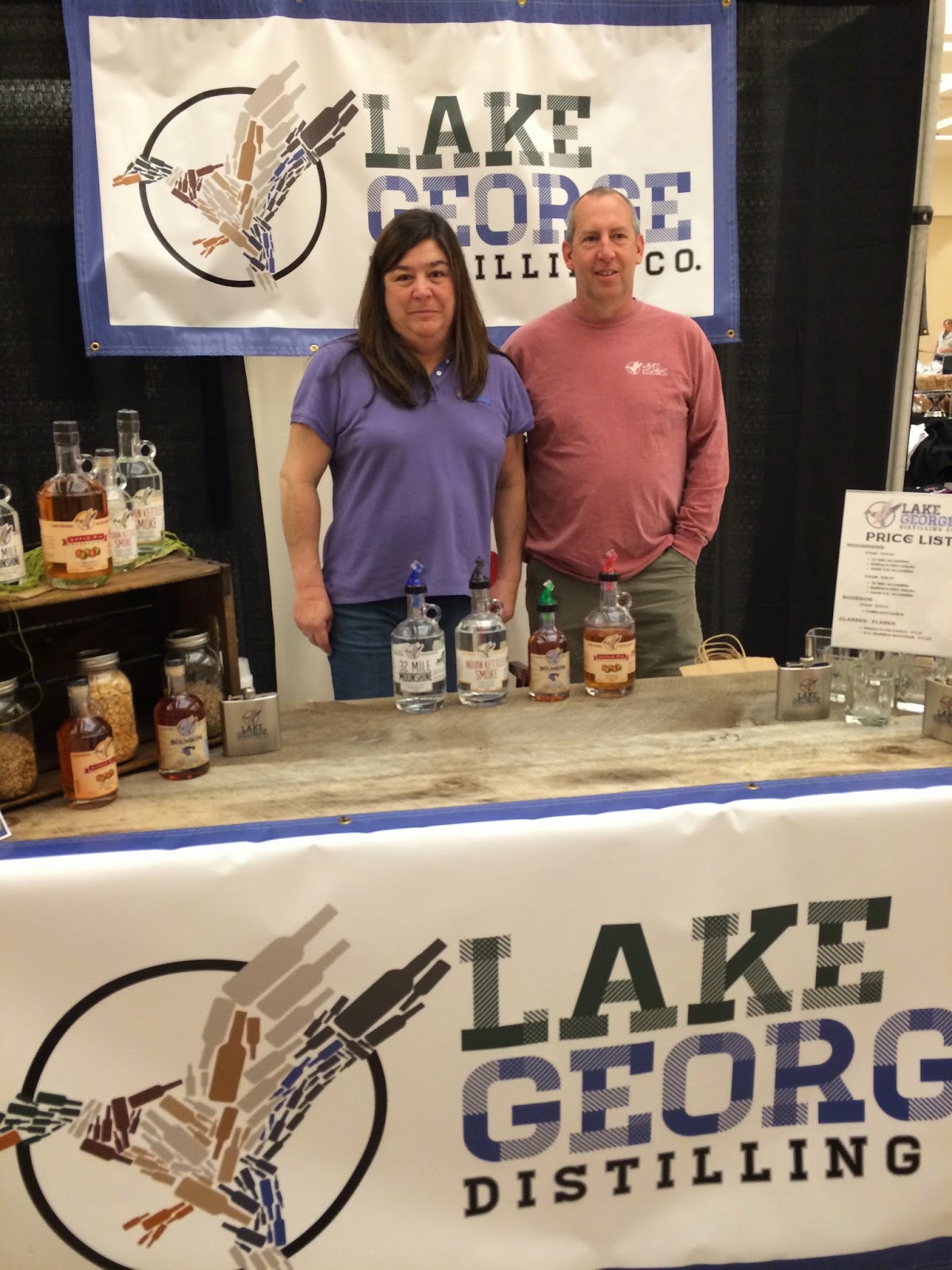 I first discovered Lake George distilling at the Upper Hudson Valley's Taste of Upstate event in Saratoga, New York. One of my favorite things about Lake George distilling is that when you go to their website, in the news and events section you'll see numerous links to newspaper posts. It's very impressive...but the message is clear. Lake George Distilling is the first "legal" distilling operation that anyone can seem to remember. It always makes me laugh out loud.
There are few places, in summer time, that are as pretty as Washington County. Giant rolling hills filled with one classic farm after another. Diary and apple rule the roost, and corn is the third in their little agricultural triumvirate. You're really not sure if you are in upper New York state or Wisconsin. It the kind of place that they make movie about. Pickup trucks and country music.
Enter Lake George Distilling Company, which was formed in 2012. Owners John and Robin McDougall take the time to select the best local ingredients from the region and use them to hand craft their spirits in small batches. According to the local newspaper, the PostStar, "Lake George Distilling Co. is getting all of its corn, rye and barley from within New York. The corn — and soon, rye — is coming from Ellsworth Family Farm in Easton, while the malted barley is coming from a new malt house in Newark Valley (Tioga County)."
"We have a deal to get our corn from local farms," said John told the Albany Times-Union."We will be able to tell our customers what farms our grains come from."
According to the McDougalls, the Lake George Distilling Co. is also a “zero waste” facility. Spent grain goes to a local farm for feed, and water used in the process is recycled and used to water the grounds during summer. Their line runs the gambit from moonshine, smoked moonshine, apple pie moonshine and then to bourbon whiskey. They hope to produce more products as they go. 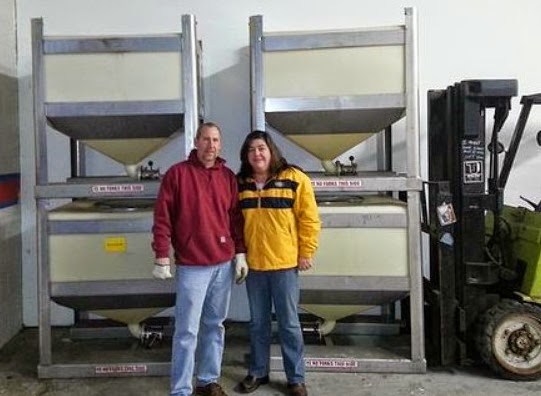 John McDougal, a 49-year-old field technician who has worked for Verizon for the last 26 years and is nearing retirement age. In his spare time he has dabbled in beer and wine making before making the leap to distilling. In the last ten years he has read books, taken courses, tasted as much as he could, and attended seminars that have given him the knowledge that is required to distill quality hand crafted spirits.
“It cost twice as much as we thought and took three times as long,” John told the PostStar about the start-up venture.
Son Tom McDougall does the company's social media to promote the business, who is currently a junior journalism/psychology major at the University of Connecticut.
Robin holds an MBA from Ellis College and has always wanted to open her own business. When John came to her with the suggestion that they open a micro-distillery she jumped at the idea. She is now handling the business end of things so John can concentrate on what he does best ... making great artisan spirits.
I got to taste those spirits in Saratoga for the first time. 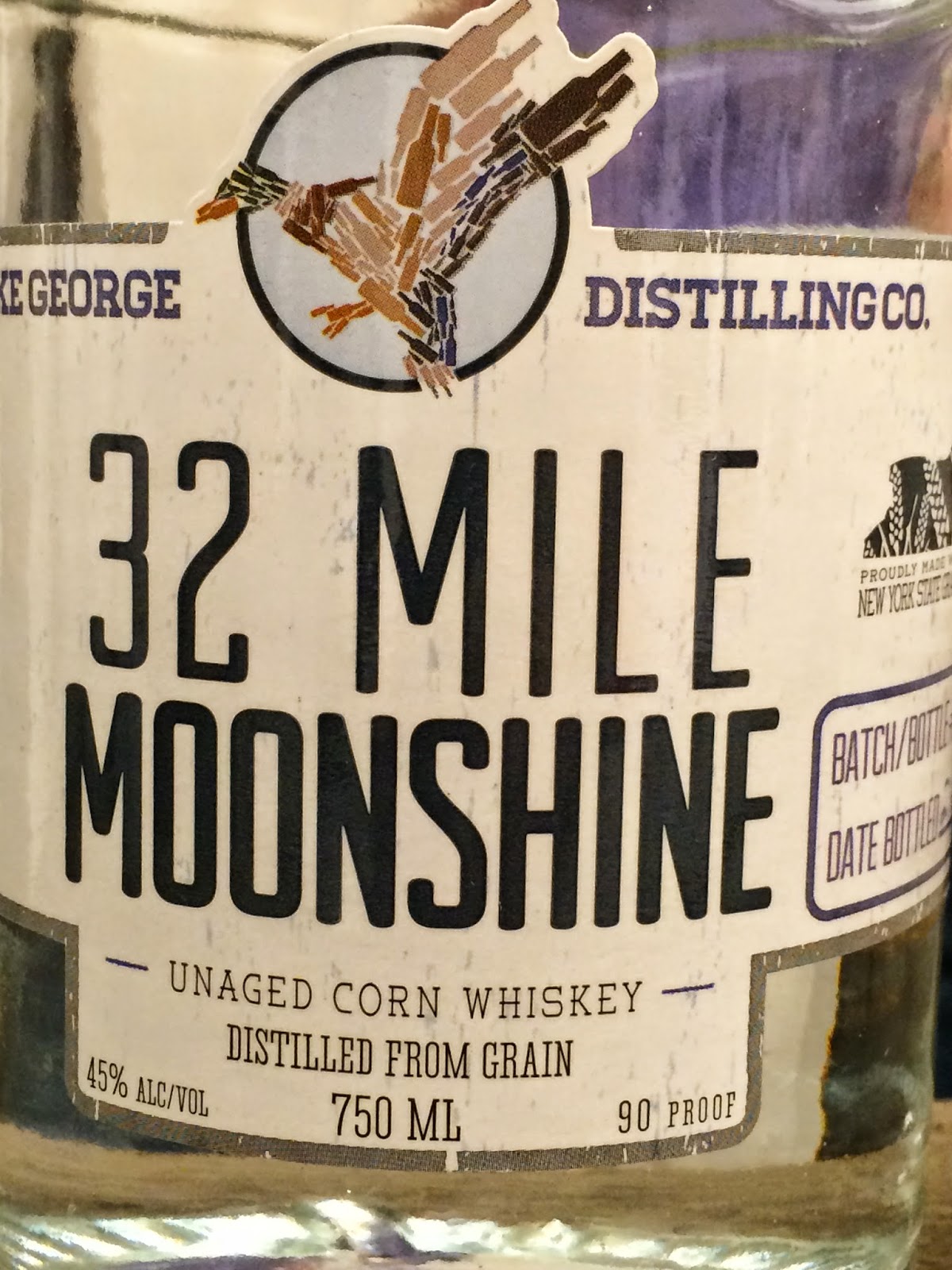 The first one I tasted was the 32 Mile Moonshine, which draws it's name from the length of Lake George. From Lake George Village to Ticonderoga the lake measures 32 miles long. Lake George Distilling's Moonshine is produced from locally grown corn. You have to love that.  A hand crafted product of Washington County, New York State. 32 Mile Moonshine is a true corn whiskey with a subtle sweetness of corn. This is a smooth, easy to drink corn whiskey. Great for blending cocktails. It has honest to goodness flavor but subtle, and not quite the burn you'd expect. Very nice.​ 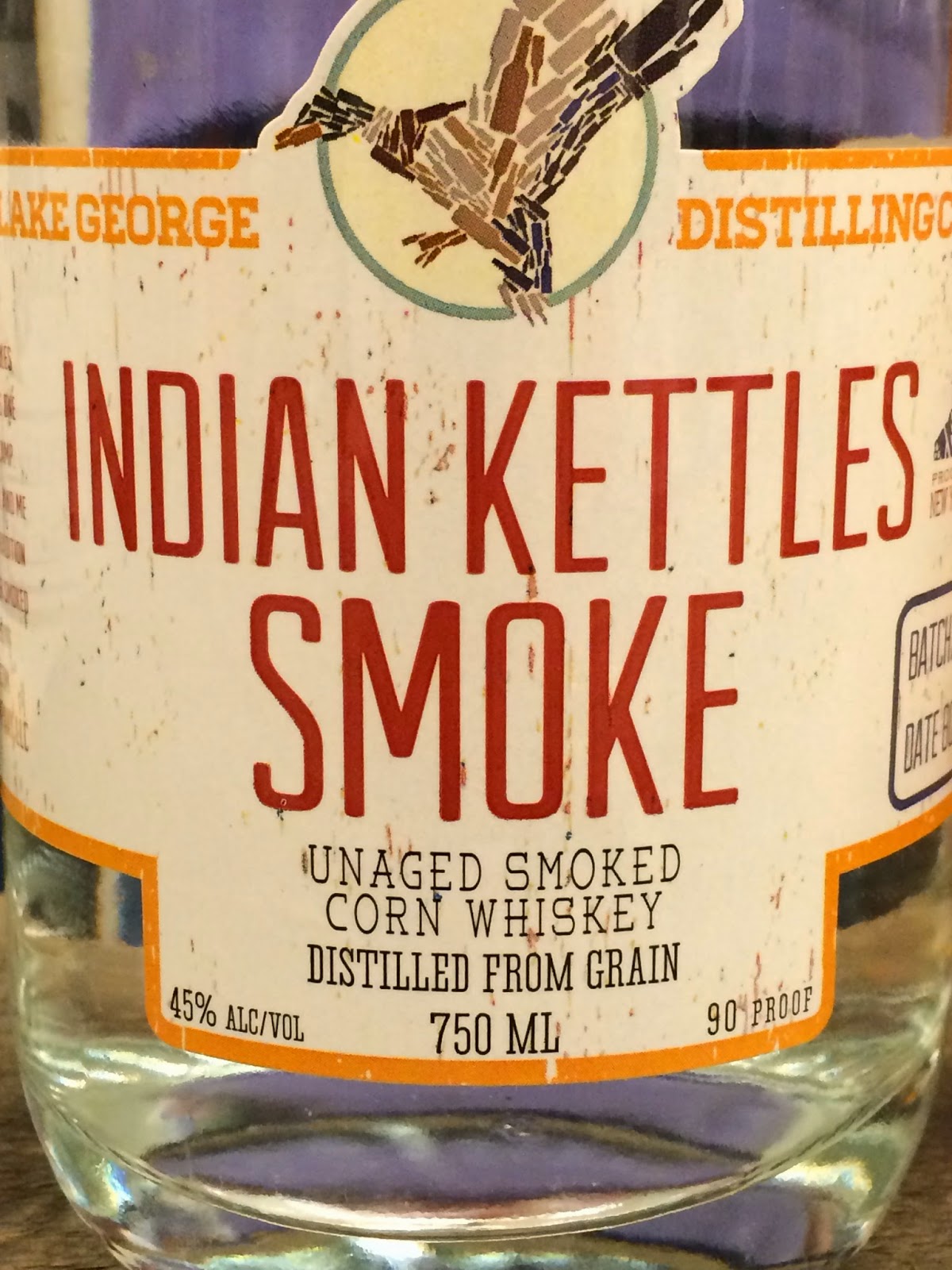 According to the New York Times, "Many are the explanations and good the stories told regarding the origin of the famous Indian kettles or potholes that abound along the shores of Lake George, N.Y. However, there can be no doubt that nature is directly responsible for their creation. Scientists say that they were formed by the constant twirling around of small stones that were held captive in the eddies of the water that once covered these shores during the glacial period." Settlers gave them the name Indian Kettles. 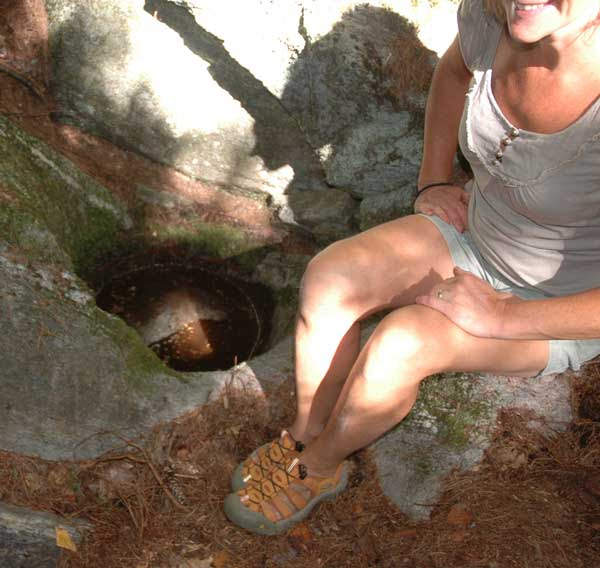 Indian Kettle Smoked Corn Whiskey was named after the deep potholes that are so popularly found along the shores and islands of Lake George. The McDougalls have just such “Indian Kettle” located on the island in front of their family camp. Every summer cleaning out the Indian Kettles was a family tradition, which continues with their children. This Indian Kettle Smoked Corn whiskey reflects that concept. A nice smokiness wafts from the glass to greet the drinker. And the smoke carries across the palate as well. This is a great elixir for more savory based drinks, or for sipping as well. Very impressive​. 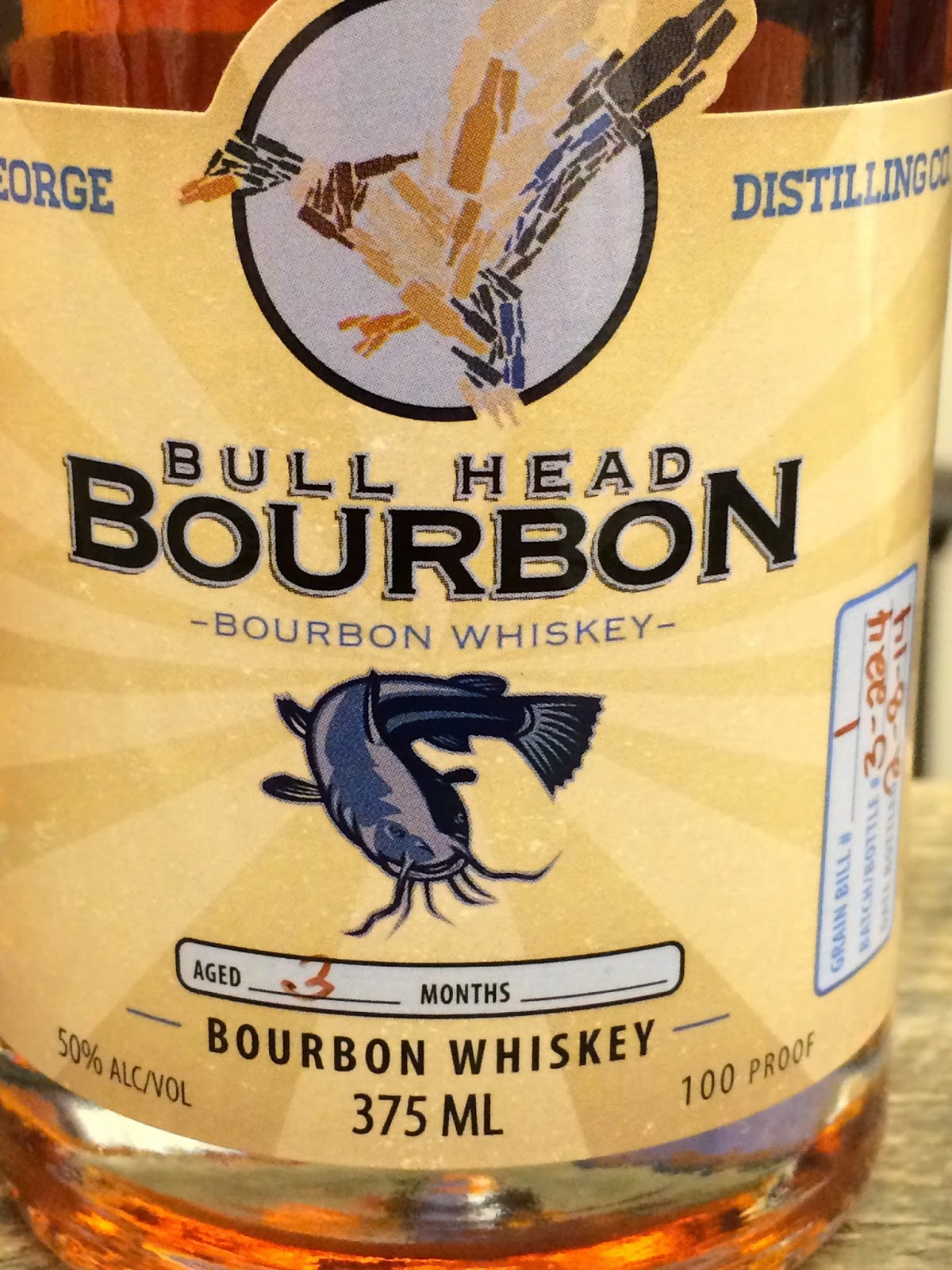 The brown bullhead is a fish of the Ictaluridae family that is widely distributed in North America. It is a species of bullhead catfish and is similar to the black bullhead and yellow bullhead. It was originally described as Pimelodus nebulosus by Charles Alexandre Lesueur in 1819. The brown bullhead is also widely known as the "mud pout," "horned pout," "hornpout," or simply "mud cat," along with the other bullhead species. The brown bullhead is important as a clan symbol of the Ojibwe group of Native Americans. In their tradition, the bullhead or "wawaazisii" is one of six beings that came out of the sea to form the original clans. The brown bullhead thrives in a variety of habitats, including lakes and ponds with low oxygen and/or muddy conditions. In many areas of the United States, Brown Bullheads are opportunistic bottom feeders. They are also known to eat corn, which can be used as bait. This catfish is easily caught with natural bait such as worms and chicken livers. They put up a scrappy fight. They are ubiquitous at Lake George. This is where this bourbon gets it's name from.
It is no small feat to make bourbon. And it is damned impressive that bourbon was among the first releases of Lake George Distilling. There are strict laws as to aging, and distillers have to carry the liquor on their rolls for a minimum number f years before they are allowed to call it bourbon. That's an expensive cost of entry. Bullhead Bourbon is a small batch bourbon that has lovely aromas of maple, vanilla, and butterscotch, and also a nice spice to it. It's unique flavor comes from a unique combination of corn and rye grain.   The rye supplies the spice to compliment the sweetness of the corn. A unique bourbon. Absolutely lovely! One of my favorites in their line. I was so jonesing for an Old Fashioned after I sipped this. Where's my muddler?! 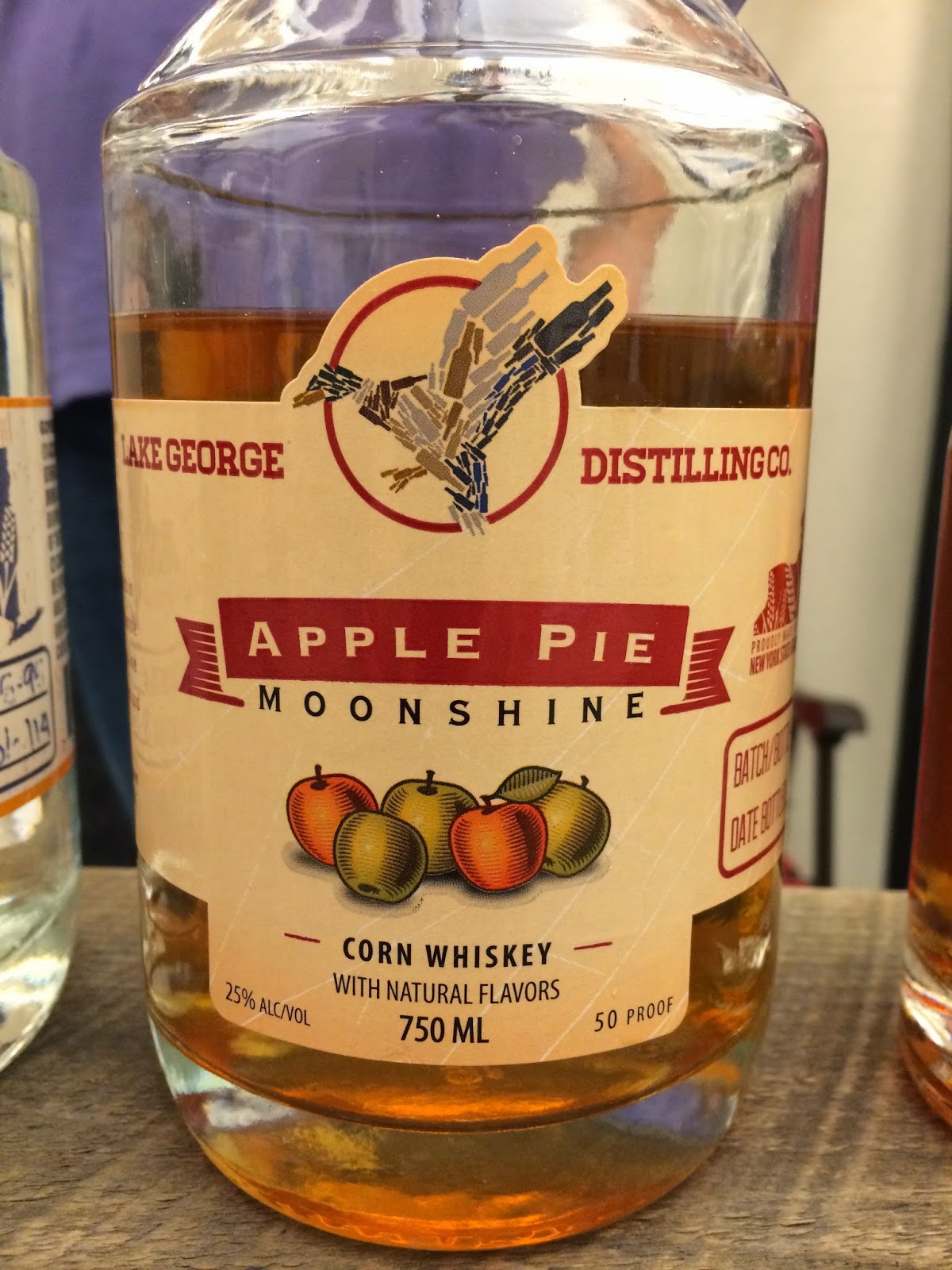 Without question, the Apple Pie Moonshine is one of the most popular products Lake George distilling offers. They've sold out of it more than once. Robin even told the PostStar after their grand opening in 2013, "I know that if I had apple pie right now, we would have sold out because every single person who’s walked in the door was looking for it,”

Lake George Apple Pies is a whiskey made with cider and spices. Lake George partnered with local Washington County apple growers to make this elixir. Call me a sucker, but this was among my favorites as well. This is easy drinking. It's somewhat sweet, but not too sweet. And the apples give it enough of a flavor that it's unmistakably apples, but not so sweet as to be over-powering. In fact, you crave more! It's easy to se why this is such a crow pleaser. Whether it's 4th of July or Thanksgiving, this is as Americana as it gets.

Lake George distilling is a small but impressive operation. There's no question that Washington County has a shining star in it's midst!

http://www.timesunion.com/default/article/Taking-a-shine-to-distilling-4519886.php
Posted by Carlo De Vito at 11:03 AM