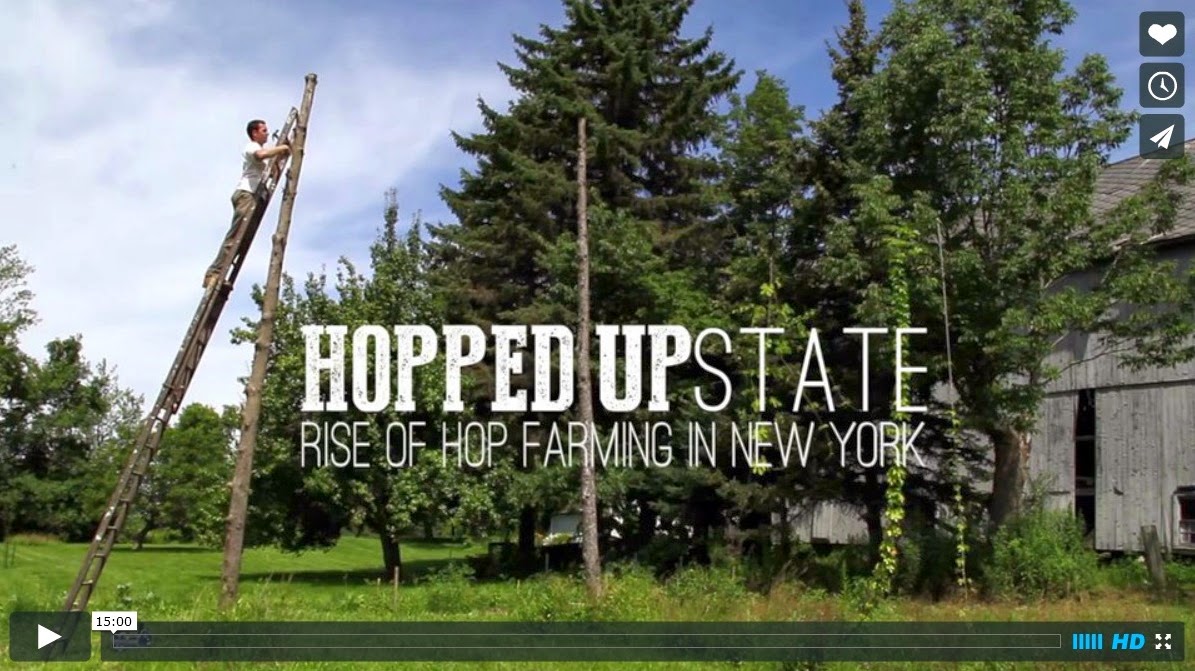 At Farm Film Festival 2014, yesterday, at the Crandell Theatre, in Chatham, NY, we saw HOPPED UPSTATE a wonderful and informative movie about the regeneration of hop farming in New York state. Hop farming had once been the domain of New York state, especially in the areas surrounding Cooperstown, but the entire industry moved about 100 years ago, and then Prohibition killed off what little part of the industry was left. Today, it is a fast growing part of the agricultural landscape. Fantastic, short little film! Eye-opening! 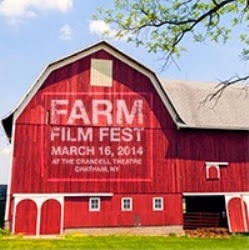 Following the passage of New York State’s Farm Brewery Law, new hop farmer Dave Pasick is not only looking to revive his century old family farm in upstate New York, but to be part of a budding economic movement in his rural hometown. Hopped Upstate: The Rise of Hop Farming in New York was shown at the 2013 Northeast Hop Alliance Annual Conference.
HOPPED UPSTATE is a video project following the rise of hop farming in New York state. Over the last decade, the country has seen an enormous shift in beer consumption from the mass-marketed ”American” lagers made by large macrobreweries like Anheuser-Busch InBev and MillerCoors to dynamic, flavorful, home-grown brews created by small, region-specific microbreweries. New York itself ranks in the top three states with the fasting growing craft beer industry. It’s been called a “bright spot” in the economy and the rapid growth is expected to continue well into the future.

In 2012, Governor Cuomo and the state legislature started taking necessary steps to support craft brewers and farmers by passing the Farm Brewery Act, which includes tax incentives and other benefits to give financial relief to burgeoning breweries. The legislation also requires that 20% of ingredients used by breweries must come from NYS farms, and that will increase eventually to 90%.
In response to the Farm Brewery law, Dave Pasick is starting a hops yard on his family farm in Utica, NY. Feeling confident that Upstate New York’s craft beer scene will continue growing, he’s hoping it will create a new market for hops needed by local breweries. Dave is now onto his second growing season and is not only looking to produce a larger harvest this year, but to be a part of a budding economic movement in his rural hometown. Watch the full documentary below.

About the filmmaker: Leslie Von Pless is a video producer and photographer based in Brooklyn and Syracuse, NY. She works full-time as the Communications and Multimedia Strategist for Lambda Legal, a national LGBT rights organization. Her videos have been featured in the Chicago International Social Change Film Festival, the Lights. Camera. Help. Nonprofit Film Festival, and she has previously won 1st Place in the YouTube Video Volunteers contest. Hopped Upstate: The Rise of Hop Farming in New York is her first independent short documentary project. As a photographer, Leslie focuses on landscape, nature, and outdoor digital photography. She belongs to the Central New York Art Guild and Cooperstown Art Association. She received a B.S. in Communications/Digital Video Production from Fredonia State University.
http://vimeo.com/75160196
Filmmaker: Leslie Von Pless | Run time: 15:00 | 2013