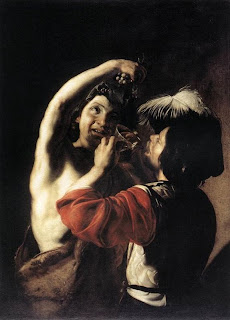 Thomas Bullfinch, in Bullfinch’s Mythology wrote, “Jove took the infant Bacchus and gave him in charge to the Nysaean nymphs, who nourished his infancy and childhood, and for their care were rewarded by Jupiter by being placed, as the Hyades, among the stars. When Bacchus grew up he discovered the culture of the vine and the mode of extracting its precious juice; but Juno struck him with madness, and drove him forth a wanderer through various parts of the earth. In Phrygia the goddess Rhea cured him and taught him her religious rites, and he set out on a progress through Asia, teaching the people the cultivation of the vine.”


There is an allusion to the story of Bacchus and the mariners in Milton's "Comus," at line 46, The story of Circe will be found in...


You don’t need to know this stuff if you go to Sugarloaf Mountain Vineyards, because all you really need to know is that the wines are great….but I love mythology and all that Ray Harryhausen and The Clash of the Titans kind of stuff. I am an old Latin student…what can I say.


Suffice to say, Bacchus in Greek literature was the god of wine. And these wines seem like they come from Olympus itself. 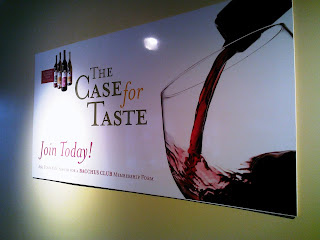 Recently, with a bunch of other wine writers and bloggers  from the Drink Local Wine 2013 conference I visited Sugarloaf Mountain Vineyards. The double-bank red barn – built in the early 1900s – the silo and windmill are all signature landmarks of the farm. Purchased by Dan and Polly O'Donoghue in 1962, the 92-acre “Windmill Farm” has been a working farm and family retreat ever since. Owned and operated by the four children – the McGarry, McKenna and two O’Donoghue families – the transformation from a traditional farm to a vineyard broke ground in 2002.


Sugar Loaf Mountain is one of the premiere establishments in Maryland. A winery set up for success like Boxwood or Black Ankle. 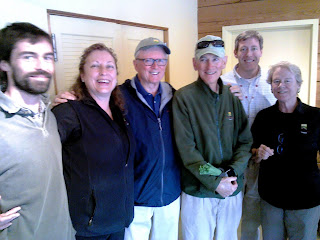 The owners assembled a winning team of experts in 2004 to ensure they produced successful quality-focused wines. The soil of the farm is comprised of equal parts clay, shale and sand. Combined with a unique microclimate at the base of Sugarloaf Mountain, the area proved suitable for planting. John Caldwell of Caldwell Nurseries in California nurtured the grafted vines to assure they were well prepared for planting. Lucie Morton obtained a degree in viticulture in Bordeaux, and she has worked in and studied vineyards in France, California and Virginia. Carl DiManno, who attended the University of California at Davis where he obtained a degree in winemaking, served as our vineyard manager and winemaker from 2004 until 2011. By 2005, the winery was complete and they were making their first vintages. Current winemaker, Benoit Pineau came aboard in 2011. He hails from France and has been educated in oenology and viticulture in Bordeaux and Toulouse.


In 2005 the winery was built and designed by the acclaimed Washington, DC architectural firm Cunningham & Quill and furnished with state-of-the-art equipment. They harvested their first grapes in the fall of 2005 and debuted their first vintages in April 2006. Their tasting room opened for business in the fall 2008, and was formally dedicated in January 2009. 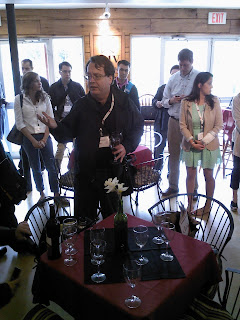 Dave McIntyre of the Washington Post introduced us to the winery, explaining the painstaking process by which the owners had assembled the team and how they had set out to make world class wine from the get-go. The writers were all busily scribbling down Dave's introduction. Dave has been a champion of SMV in Maryland for a while, and I had been anxious because I had not been able to get my hands on any of their wines. I was excited. 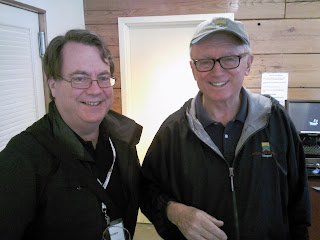 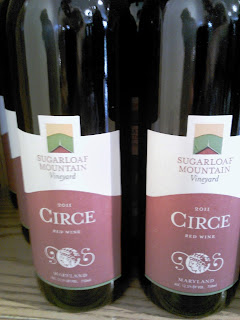 2011 Circe was the first wine we tried. In mythology, Circe is a powerful enchantress who transforms mortals with her potions. Daughter of the Sun and mother of Comus, the goddess has charms that few can resist.  Again, like Boxwood and Black Ankle, SMV concentrate on building a brand and blends. Circe was the first of SMV’s wine to break through, winning the 2007 vintage taking the Governor’s Cup. Circe is an easy-drinking table red blend of the five Bordeaux varietals. It’s brick red in color. It’s fruit forward, with a love amount of stewed strawberries and raspberries and hints of plumb on the nose. Ripe dark cherries come across the palate.  A lovely complex red, with nice structure, nice acidity and soft but good tannins. A lovely drinking wine. This was my favorite wine of the morning!  Wonderful! 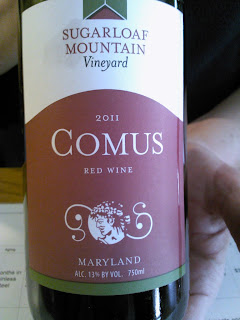 2011 Comus was next. In mythology, Comus is the god of revelry and merriment.  The son of Bacchus and Circe, Comus tempts mortals with a life  of pleasure. In creating Comus, the owners were attmpeting to represent “Maryland winemaking at its finest; a Bordeaux-style blend utilizing the five traditional varietals from the 2011 harvest to achieve a wine of unsurpassed depth and complexity.”


Indeed, the 2011 Comus won Best of Class: Bordeaux Style Red Blend - 2013 International Eastern Wine Competition and a double Gold Medal there as well. Older vintages have brought gold medals home from three other competitions as well, including the Governor’s Cup in 2012.


The wine was garnet colored in the glass, with big dark stewed red berries and vanilla and toasty spices. Across the palate came cherries, blackberries, plums, blackcurrant, minerals, and hints of spice and mocha, and a smoothness rounded out by French oak. y that combine harmoniously with medium toast French oak. Absolutely gorgeous. Luxurious. 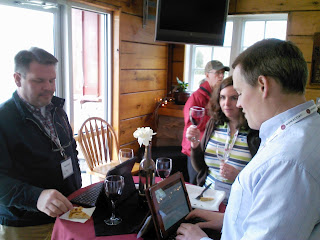 You know you’re going well when a gathering of wine writers is tasting your stuff, and a lot of them are nodding approvingly to one another. These wines were beautiful and impressive.

EVOE! the joyous cry of the ancient Bacchanalians at festivals honoring Bacchus, the god of wine, is the 3rd in SMV's series of Bordeaux style blends drawing its name from classical mythology. This wine is an unfined reserve of the best lots of our Bordeaux varietals, aged in French oak barrels for 2 years. EVOE! Is an dark inly garnet/purple color. Dark fruits come off the nose, stewed dark cherries, raspberries, cassis. Somehat jammy. Mocha and vanilla also come across. Dark fruits come across on the palate as well, accompanied by a fig, cassis, and lekvar hints in the finish, as well as just a touch of fallen leaves. Big fruit is accompanied by low acidity but sizable tannins. This is a big, deep, meaningful wine. Another absolute winner. 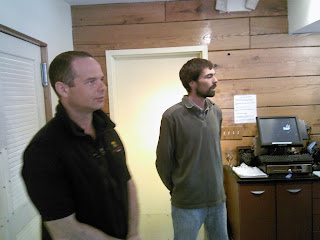 These two men have a lot to do with the way Sugarloaf Mountain Vineyards wines taste today...the vineyard manager and the winemaker. Congrats to them!


The wines at Sugarloaf Mountain Vineyards are amazing. And somewhere Bacchus is happy….and drinking something from SMV!
Posted by Carlo De Vito at 5:35 AM