THE PRICE IS RIGHT: IS THERE A GLASS CEILING FOR REGIONAL WINE? 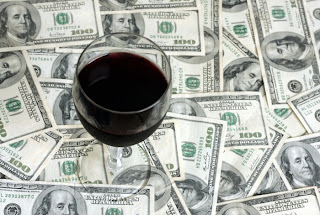 I can remember back to the 1980s when the only New York wines you could find were things like Hunt Country red at the Union Square market on Fridays and Saturdays…and then in the 1990s at Grand Army Plaza farmers market in Brooklyn. Stores didn’t carry it. At least not the dozen or so I would peruse through.
OK, so I am, where wine is concerned, a shopaholic. Relatively speaking, under $100 per bottle, I’ll consider buying almost anything. These days less so, but back in the days before 2007, I happily plunked down all kinds of cash for one bottle after another. To be sure, I am also a great comparison shopper, so I was happy to also waste my time perusing two or three or four stores and a website or two in order to secure the wines I was chasing at the best possible price.
Cakebread? Hanzell? Turley? Kistler? Pahlmeyer? Sin Qua Non? Mouton? Lafite? Baron Pichon-Longueville? Montes Alpha M? Almaviva? The list went on and on. I am not bragging, merely trying to establish that I, as a wine buyer, long before I had actual skin in the game, was a wine buyer….second class albeit, but still in top 20% to say the least.
Now, recently, Eric Asimov wrote a fantastic piece on Chardonnay (which has taken a beating of late) extolling the virtues of the cool climate whites coming from the Santa Barbara, Santa Rita, Santa Ynez, valleys, and others. I am a big fan of the region, and have visited and shopped there two out of the last three years. It’s one of my new favorite regions. And its whites are very light, minerally, and cool climate.
I do not particularly begrudge them their prices. The prices are actually not rich by any standards, but they are in the $30-$40.00 range. No better or worse than well-made, artisanal wines from Napa and Sonoma. I prefer the cooler climate style these days. I love Sea Smoke, and Clifton-Brewer, and Foley, and many others. So what’s the issue?
In a rejoinder to the piece, Richard Olsen-Harbich the winemaker at Bedell Cellars, in the North Fork of Long Island, on facebook, was thrilled with the kind words Asimov had for this cool climate style of Chardonnay. The winemaker remarked on the irony that Long Island had been producing this same style of minerally, light Chardonnay for the last 15 or so years, with good scores and reviews to show for it to boot. And that the prices were also in the $30-$40.00 price range. “New York wineries take note,” texted Olsen-Harbich.
I knew exactly where Rich was going. He was hinting at a glass ceiling for regional wines.
But here’s the thing. The truth is that there are two answers. Yes. And No.


To answer yes, I will wear another hat. I am also a producer. And the one thing local winemakers hear up and down the eastern seaboard is: You’re wines are too expensive. Wine distributors, liquor stores, and restaurants, from New York to Virginia, all chime the same thing. Not just to me, as our wines are way under priced (ask my accountant) but to many, many wineries. All regional wines, no matter how exquisite suffer from the same thing – they hit the proverbial glass ceiling, Price being the same or not, priced right or not, in the distribution game, regional wines just do not stack up in the wholesale and retail marketer’s eyes.
On a personal aside, I had one sales rep tell me that at $19.99 the wines we were already selling out of (we cannot make enough of them), and getting rave reviews for, were $10 too high…despite the fact that our wines were written about in some of the best newspapers, magazines, and websites, and sold in some of the best restaurants in NYC and the Hudson Valley.
So, that is the glass ceiling. An yes, it exists with distributors, retailers, and restaurants. is this a sexist thing? Like women have to do twice the work to get paid half as much? It has been said that Ginger Rogers did everything Fred Astaire did, except she did it backwards and in high heels. Is that the double standard applied here? It seems like an east coast wine is faced with the same challenge that women around the world have been facing down for years.
In some ways yes. This is an older generation, who has several preconceived notions. Foreign wines are superior to them, especially in New York, where France, Italy, and Germany reign supreme. California is good. Chile and Argentina pretty good. Regional wine is last.
The prejudice for regional wine is memory. In the 1980s, for example, regions like New York, Maryland, New Jersey, and Virginia said, come, drink our wines. But not all the wines were ready for prime time, and especially these older professionals remember their tastings. Local wine is dreck to them, even if it is not. Turning these heads will be harder and harder as these older professionals get….well, older.
They hold this memory tight to their chest, and they resist all the new things happening in regional wine in the last 10 years. And they say price is among the reasons. I heard this mantra at the Drink Local Wine 2013 conference in Baltimore just a few weeks ago. This theme runs up and down the east coast.

And to be fair to the distributors, and they do share horror stories with me. There are wineries they would like to work with, but who have not priced their wines appropriately so that they can start to work with a distributor. It’s a deep discount a distributor asks for. If a winery can’t make any money selling to a distributor, their wines are not well priced enough already. But that is a different issue.


And this is why they are wrong. Because here’s the second part to my answer. There is no ceiling to what east coast wineries can charge for their wines at all. And I can prove it to you.
I think it’s important to note, in the Finger Lakes and on Long Island, there are wineries that are selling top notch wines for prices similar to what their west coast brethren are asking. In their tasting rooms, they are selling lovely, lovely, competitive products, and the public is buying the wines without problem. The crowds show up in spring, summer, and fall. They join the wine clubs. Consumers walk out these tasting room doors with cases and multiple cases at a time. Small bottlings, and large ones, are sold with little deterrent.
Wineries like Barboursville, Boxwood, Black Ankle, Unionville, Bedell, Lenz, Wolffer, Channing Daughters, Dr. Konstatin Frank, Ravines, Heart & Hands, and many, many more have higher end products people are happy to pay for. If you are a wine consumer and you like good wines, these places are making some of the best wines in the country. And I’m leaving a bunch more out. Great wine is now being made on the east coast.
The target audience is and remains younger consumers. Getting more open minded consumers to come in and taste east coast wines is what it’s all about. As Matt Kramer has pointed out to me in the past, every generation wants to find their own wine. They want to make their own discovery. They don’t just want to drink what their parents drank. You can’t afford Bordeaux, you go Napa. Can’t do high end Napa? How about Rhone? Chile is the new place? Each generation finds a new region to claim its own and stock its cellars with those wines. That’s where regional wine finds itself.


But pricing? There is no ceiling for quality, nor should there be. An artisanal winemaker in New York and Virginia has every bit the right to charge what his or her California counterpart does. The wine tanks, the labor, the bottles, the corks, the labels, all cost both of them just the same. I see consumers paying high prices for the quality artisanal farm produced wines that are being produced regionally. And I am seeing a slow, steady improvement, year by year, in the marketplace. More and more people are buying, drinking, and holding local and regional wines.
Today, I can walk into stores in New York City like Astor Wines & Spirits, McAdams Buyrite, The Wine Hut, and find a decent to large selection of quality regional wines. They are in restaurants like Gramercy Tavern, The Home Restaurant, and many more.

In the end, while there may be a glass ceiling for retailers, distributors, and restaurateurs, there is not with the consumer. And the consumer is the only arbiter. The others will always slowly follow. They always have. They always will. They have no choice.
So, if you are a consumer and you want quality wine, don’t worry about the price. Worry about the taste and quality. Try more and more local wine. Many will absolutely impress!!
And if you’re a winery owner, and some sorry SOB tells you your wine is too expensive, you can always tell him that you don’t make jug wine. Tell him to try something special.
Posted by Carlo De Vito at 4:03 AM