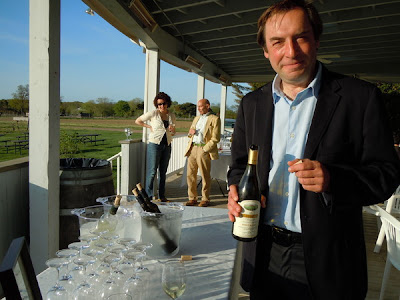 I recently saw Miguel Martin at the New York Drinks New York event at Astor Wines & Spirits. Miguel Martin fascinates me. Here’s a man who could be making wine anywhere in the word (who has made wine everywhere in the world). What is he doing on Long Island?
“I wanted a place where I could spend more quality time with my family and do small scale, hands on winemaking,” Miguel told Thoma Sarc who wrote for Examiner.com in 2010. Sarc opined that Martin thought the region had great potential to make wonderful wine. 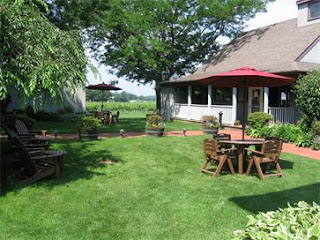 According to Sarc, “Miguel was born in Southern Spain and raised in Madrid. After attaining a degree in Agricultural Engineering from the University of Madrid he traveled to the US to first make wine at Le Reve in Southampton, and then to UC Davis, California, to take further winemaking classes. He also holds a masters degree in enology and viticulture from the Center for Agarian Investigation in Madrid. 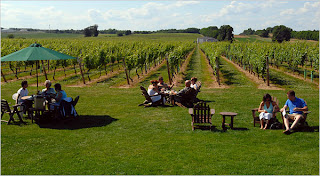 ”From California he worked for years in Sonoma before traveling to Australia and Chile to work three back to back harvests on both northern and southern hemispheres,” continued Sarc of Martin’s long journey. “After getting married, he settled into the Carmel Valley wine region of California’s Central Coast. From there he went to work for Robert Mondavi at his Woodbridge winery in Lodi, California, where he oversaw the white wines program. In 2002 he moved his family back to Spain to accept first an offer in Catalunya, focusing on both reds and traditional Cava, and then in La Mancha to help start up a new venture for Gonzales Byass, mostly producing more reds. 2006 enticed him back to Long Island where he took over as head winemaker for Palmer Vineyards. Miguel and his wife, Ellen, a teacher, along with their three children, reside in Southampton.”

o when I saw Miguel, I had recently tasted his Merlot, but was curious about his line up for the NY Drinks NY event. He had a wonderful line-up of fresh, bright , refreshing white wines. Just in time for summer! 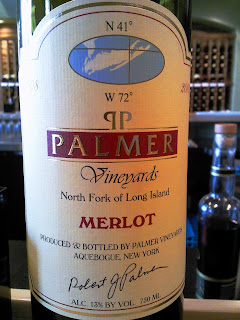 I had the 2009 Merlot at the Canandaigua Culinary Center just after the holidays. This is a wonderful, medium bodied dry red. A lovely, elegant wine, with lovely dark raspberries and plum up front with good acidity, and nice tannins. The fruit lasted a long, long time. A lovely, lovely wine. 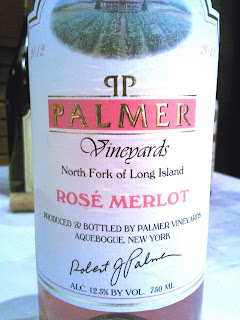 This is a lovely rose made from merlot grapes. Light pink wine, this wine was bright with strawberry and light cherry with hints of lime. The bright acidity keep the light fruits zesty and fun. A nice long finish. Perfect for summer eating or just sipping. 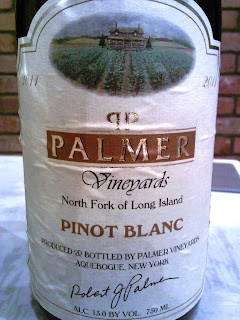 According to Wikipedia, "Pinot Blanc is a white wine grape. It is a point genetic mutation of Pinot noir. Pinot noir is genetically unstable and will occasionally experience a point mutation in which a vine bears all black fruit except for one cane which produced white fruit. In Alsace, Germany, Luxembourg, Italy, Hungary, Czech Republic and Slovakia, the wine produced from this grape is a full-bodied white. In 2000, there were 1,300 hectares (3,200 acres) of Pinot blanc in France, with most of the plantations found in Alsace, where it is used for both still white wines and is the most common variety used for sparkling wine, Crémant d'Alsace.
This Pinot Blanc is bright and filled with zippy acidity. Green apple, citrus, and a floral nose give the wines a beautiful start. A great summer wine that's great for sipping or super with cheese, chicken or fish. 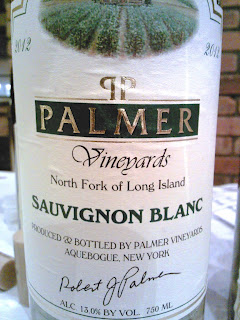 2012 Sauvignon Blanc was another wine I really liked, and again, just in time for summer. The North Fork is well known for some of the best Chardonnays on the east coast. But the Island is not forging a great reputation for Sauvignon Blancs as well. This Palmer 2012 Sauvignon Blanc has bright, big nose of citrus and apple with a great citrus ending. This is a lovely, elegant, refreshing Sauvignon Blanc from Long Island. 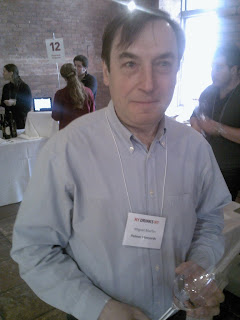 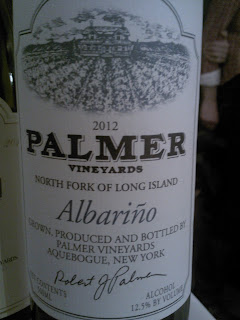 According to Wikipedia, again, "Albariño or Alvarinho is a variety of white wine grape grown in Galicia (northwest Spain), Monção and Melgaço (northwest Portugal), where it is used to make varietal white wines. Albariño is actually the Galician name for the grape. In Portugal it is known as Alvarinho, and sometimes as Cainho Branco. It was presumably brought to Iberia by Cluny monks in the twelfth century[citation needed]. Its name "Alba-Riño" means "the white [wine] from the Rhine" and it has locally been thought to be a Riesling clone originating from the Alsace region of France, although earliest known records of Riesling as a grape variety date from the 15th, rather than the 12th, century. It is also theorized that the grape is a close relative of the French grape Petit Manseng."

Dominique and I love Albarino. And you can get a large number of the Portuguese versions of this wine inexpensively. But this 2012 Palmer Albarino 500ml bottle is a rare treat. This is the only Albarino available on the Island. This is an extremely unique wine. This is a big bomb of acidity with bright, big green sour apple and citrus. Lovely, elegant, and highly drinkable. One of the ultimate summer whites.

A great wine up of wines for summer. A great job by Miguel and his group!
Posted by Carlo De Vito at 7:49 PM