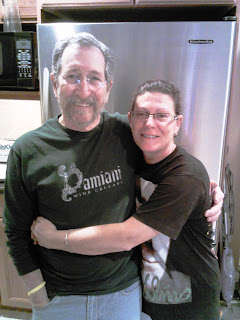 So, there I was, on a Thursday night, driving down the New Jersey Turnpike from New York City like a thousand times before. It took every ounce of energy not to get on to the Garden State exchange at exit 11, and worm my way down to exit 23 to Route 9 South, and drive to Freehold, NJ. That same urge came over me again, when I passed exit 8A and Exit 8 and Exit 7A, all old routes back to our old neighborhood where we lived from 1996 to 2007, and where we still own a home. It felt strange and sad not to pull off the busy, meandering highway, and wind my way home through the county routes back to our old Victorian house. I cannot lie, I was melancholy. 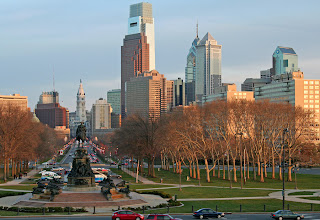 However, it was even more weird as I turned off at Exit 6, and took the Pennsylvania Turnpike into sub-urban Philadelphia. I first visited Ardmore (which will be a separate post) and then made my way to visit Ed Liebowitz and Linda White. Again, melancholy overwhelmed me as I drove down streets I had driven down many, many times before back when I worked in the City of Brotherly Love for more than seven years.I was on my way to Baltimore, with a pit stop in Philly, before arriving at DLW 2013.
Now, I will be frank. I knew Ed and Linda on Facebook. That is to say, we rooted for the same liberal causes, liked he same wines, the same idiotic jokes, and seemed to know many people in common. But we did not know each other!
This is the problem with Facebook….you have FB friends, but in fact, you really don’t know them. Well, how bad could it be? "What if they turned out to be serial killers?" asked my wife. I told her, if something happens, unfriend them for me.
So, it was after this wave of melancholy as I approached their house. Ed, who had explained to me, that their house might be on an over ramp on the highway near their home on GPS, was waiting for me in the drive way, waving me in. We recognized each other immediately. OK, so maybe it wasn’t immediately. He looked just like himself on facebook – thin, bushy gray hair and beard, and glasses. I on the other hand, look like the Macy’s Thanksgiving Day Parade version of my facebook photo – just slightly over inflated…..like a blimp. 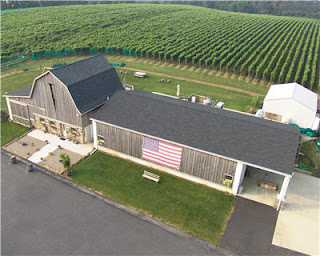 Anyway, after getting over their shock over my looks (maybe I was the SERIAL KILLER!!) they could not have more polite, nor more welcoming. I called to tell them I wasn’t far away. Ed had told me I better hurry up, or I would miss the first wine of the evening, a Va La Vineyard wine. He laughed, and also said he wasn’t kidding. I knew these were already my kind of people. 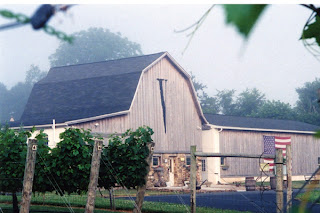 Their house was beautiful, and Linda had set up a lovely table. They have a gorgeous big white fireplace. But as I said, these are my kind of people. We spent the entire night sitting or standing in the kitchen. When dinner was ready, we stole the plates from the table, and just kept talking wine and standing in the kitchen.
Ed and Linda are wine people. And we all share a love and curiosity of New York and Pennsylvania and East Coast wine in general. And we are all fans of Va La Vineyards, in Avondale, PA.
The Farmer Va La, as Anthony Vetri likes to call himself, is a master winemaker. According to Anthony, "The name va la is in recognition of a village near the Piemonte-Liguria border called Giusvalla, population 400, which our family emigrated from. The phrase “va la” translates to “go there” in proper Italian. In our dialect it was simply used when you wanted to tell an insufferable person to “piss off”."
Anthony grows a ton of different grapes. And he makes no varietals. Like Boxwood and Black Ankle, Va La produces nothing that's not a blend. That's the beauty of what he does. And all his wines are incredible. He's gotten tons of press, and there's no one that doesn't like his wines, including the Philadelphia Inquirer, Paul Vigna of the Patriot-News, and David Falcheck as well.
I have been jones'in for some Va La ever since I finished off all my Mahogany and Silk that I had bought the last time I was there. So Ed and Linda were definitely fixing me up. 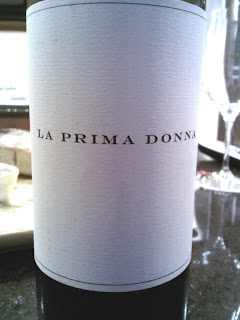 This wine was produced by the stony soils of the southeast area of the field. It is a blend of tocai, malvasia bianca, viognier,  pinot grigio, petit manseng . This used to be a tradition white wine, but now it is a vin orange.  It’s got the big fruit up front, with great flavor. Now, I will tell you I am not a fan of vin orange. The orld famous Jasco Gravener makes them, and several others, as well as Steve Casscles in the Hudson Valley. I am not always a fan. If I am going to drink it, I prefer it chilled, but aficionados pour it, they like it room temperature. Ed and Linda served the La Prima Donna slightly chilled. I really liked it. Orange blossoms, honey, apricot all came through on this slightly orange colored wine. A slightly creamy finish gave it almost a rose type finish. This was a lovely wine.
“This is a standout, an alive and invigorating wine…”  —  Jeff Alexander, Philadelphia Wine Examiner
“Wine of the Year! Truly an outstanding blend.”  —  2012 Case of the Brandywine, Delaware Today Magazine


“…truly one of the best American whites I have tasted.” —  Roger Morris, Delaware Today Magazine 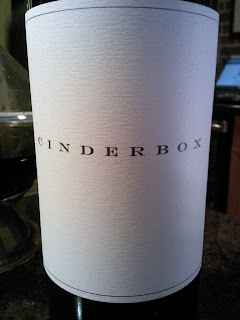