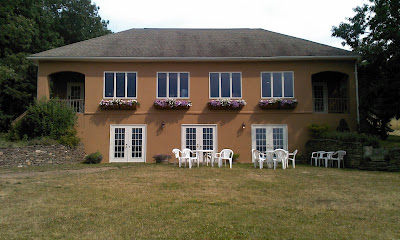 So, while I was out in the Finger Lakes for the Finger Lakes Wine Festival, me and two other fellows, decided to spend a day touring the vineyards of the Finger Lakes. In the past, we always went up lake Seneca. One year the eastside, another year the west side. This year we drifted over to Lake Keuka. And one of our stops was at the wonderful Ravines Wine Cellars.

Ravines Wine Cellars is a boutique winery in the Finger Lakes of upstate New York. It is the dream and passion of Morten & Lisa Hallgren, a European Winemaker/Oenologist and his Chef/Foodie wife. Together they have created a small, distinctive winery crafting elegant and food friendly wines. 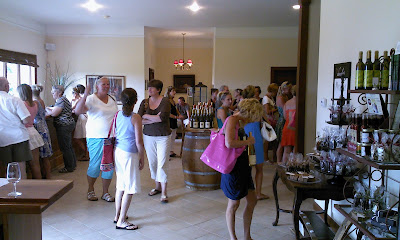 Morten was raised in the Provence region of the South of France. The Hallgren family owned and operated Domaine de Castel Roubine, a 270 acre estate with 170 acres of vineyards. 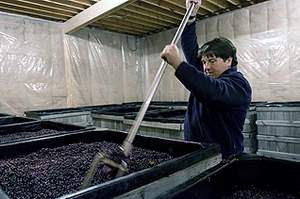 The family built a new, state-of-the-art winery at Castel Roubine, and expanded the distribution of its wines to most of Western Europe and North America. Morten spent years in the vineyards learning the viticultural skills that would serve him later in life, along side his future brother-in-law Jean Michel, and in the cellar, he learned the traditional methods of fine European winemaking. 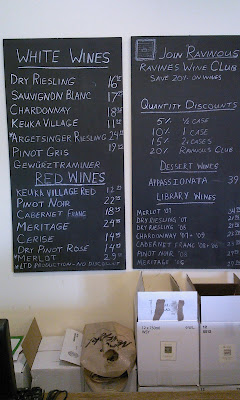 He received an advanced degree in both Enology and Viticulture at the Ecole Nationale Supérieure d’Agronomie in Montpellier, one of the world’s top winemaking schools, and spent his first harvest in Bordeaux, at Chateau Cos d’Estournel, a world renown winery in the Medóc region owned by the legendary Bruno Pratts.

After working for a French negociant on a project in West Texas, he moved on to the Biltmore Estate in Asheville, North Carolina, the most visited winery in America.
He was recruited by Willy Frank who offered him a job as chief winemaker for Dr. Konstantin Frank’s Vinifera Wine Cellars on Keuka Lake, in the Finger Lakes of upstate New York, where he continued working for six years. 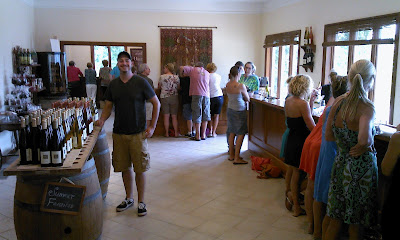 In 2000 the Hallgrens purchased a 17 acre parcel of land on a hillside on the Eastern slopes of Keuka lake. According to Ravines website, "This land is located at the widest part of the lake which allows grapevines to receive maximum benefit from its temperature-moderating effects, it has a good slope which keeps the mineral rich soils well-drained, and is situated between two deep ravines, which drain cold air from the land during the winter. These ravines are the namesake of the winery."

The very charming tasting room with scenic views of the lake, opened in spring 2003 and is decorated in a Provençal style. Just two months after they opened, Ravines won Best Dry Riesling in the 2003 World Riesling Cup at the Eastern International Wine Competition for the 2002 Dry Riesling. 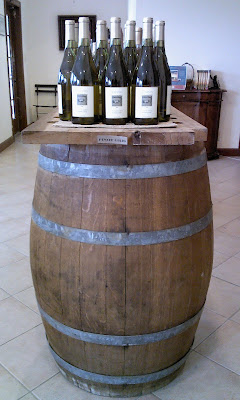 Hallgren is the ultimate winemaker as artist. Evan Dawson, author of Summer in A Glass, the highly priased book on Finger Lakes wine, Evan Dawson quotes Hallgren as saying: "The terroir of the Finger Lakes is revealing itself, but only to those who are paying attention." 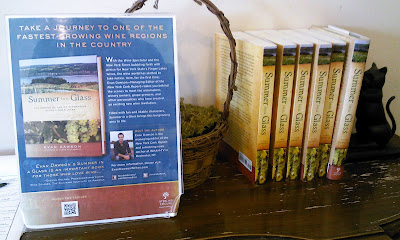 "Hallgren spends a lot of time working with his growers and in the vineyards. He believes low yields are key to good wine and for the grapes he buys, he pays by the acre and not the ton, to ensure yield control. It's clearly paying off as Ravines is starting to earn critical acclaim," reported TheWineO Blog (thewineo.net). "Last year, New York TImes wine critic Eric Asimov not only singled out Ravines Dry Riesling for high praise in print, he bought a case for himself (the ultimate praise!). Not long after, Wine Spectator included Ravines Dry Riesling in its Top 100 Wines for 2011 (#72). To have your wine mentioned in the same breath as Helen Turley's Marcassin Marcassin Vineyard (#74) can't hurt an emerging wine region." 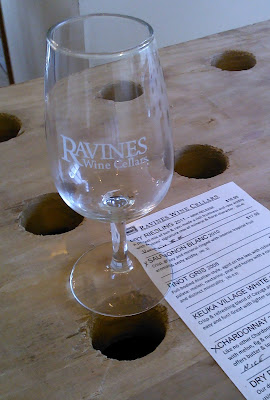 So that's the level of wine we're dealing with here. Hallgren is a fabulous winemaker. The winery looks like something out of The SOund of music....with his architecture and finesse. The interior is fantastic - light, airy, well appointed, and smartly decorated. It speaks of quality yet it had a relaxing feel to it. The wine bars were lovely, a series of riddler rack sides laid across barrels with glass tops were the rather cool, clean, fun bar top no one expects. But it's that little kind of attention to detail you see when you're at Ravines. 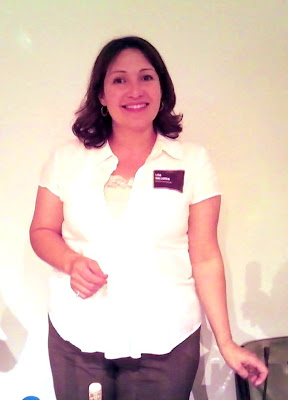 That's where Lisa plays so heavilly a role. Where Morten is somewhat reticent with strangers, Lisa is the smiling face of the winery - and Morten's secret weapon. She is an excellent and charming sales person, and she is a well-established foodie in her own right. She can be bubbly and chatty, and is ecellent with customers both from the trade and with consumers. Her touch is everywhere. 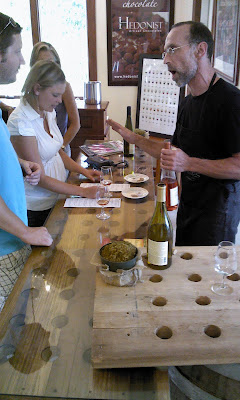 The tasting room was full on a Friday, filled with large groups, small groups, and couples. It had a nice hum to it. The tasting would only improve the experience. 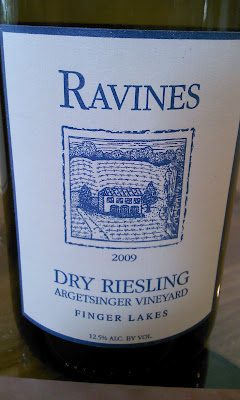 Dry Riesling 2011
This is what the winery first became known for, and what still is their signatur wine. The nose is full of fruit blossoms, pear, and apple. On the palate the pear and apple come through, with a burst of citrus and a nice mineral quality. Absolutely light, delicate, and elegant. A world class white.

Sauvignon Blanc 2010
As promised in the tasting notes, the lime, citrus, floral, steely and mineral elements all come through. Nice fruit that lingers on the palate for a long time, with great acidity and a wonderful, zesty finish. Fantatstic!

Chardonnay 2010
Our 100% Chardonnay grapes are picked, sorted, then dried using a traditional drying technique called "appassimento." This Italian word translates losely to mean withering, fading, or even wilting, and refers to both the technique, as well as the final product of the process. Appassimento wines tend to be more of a sweet wine, however, full-bodied dry wines can also be produced. The most famous of this type would be Amarone, which uses the same technique and produces 15% alcohol, totally dry wines. The drying process may result in the grapes losing up to 40% of their weight. Morten's Chardonnay grapes are partially sun dried. Fig and pear explode out of the glass. There's also citrus and some kind of spiceness.Lots of vanilla, but not over powering. Wonderful balance again on fruit and acidity. Wonderuful wine. 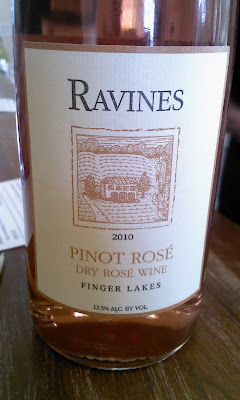 Dry Pinot Rose' 2010
Morten makes a Rose from Pinot Noir. I am always agogg over those who have the audacity to make rose from the precious Pinot Noir grape. But, I have to admit, the wine is superior. Lovely salmon colored wine with bright fresh sour cherry and fresh strawberry. There's a hint of kiwi or slate? Wonderful, crisp, refreshing. Lovely.

Keuka Village Red 2011
A light-to-medium bodied dry red made from a blend of Cabernet Franc (40%) and Noiret (60%). A combination of plum and black pepper make this table wine a lovely barbecue accompaniment, or perfect with pasta or cheese. 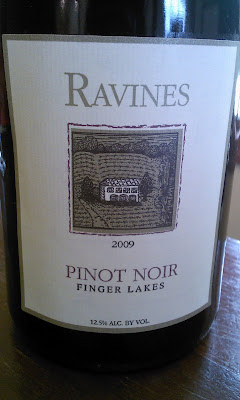 Pinot Noir 2009
It's not fair. You go through a portfolio like this and you almost look for a clunker, thinking, this is too good to be true. And you are almost elated and disappointed too. Because the whites are so exquisite, you expect the red to almost fall off. Not so! Cherry, earth, and plum and vanilla explode out of the glass on this lush Pinot Noir. Each sip reveals a new flavor. The brightness of the acidity keeps the fruit fresh and vibrant. The nicely balanced tannins help make this a smooth, lovely glass of red. Another Pinot Noir to add to the growing list of favorite NY state Pinot Noirs. Exquisite! 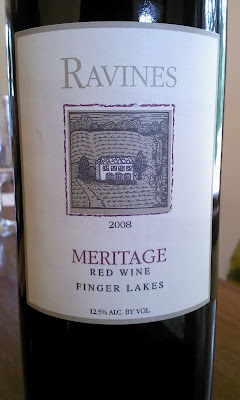 Meritage 2008
As ever with Morten, the Meritage is a classic European styled blend of traditional Bordeaux grape varietals - Cabernet Sauvignon, Cabernet Franc, and Merlot. According to their notes, each variatal is made and aged separately in French and American oak barrels for 1 year before being blended. Close your eyes, and feel Bordeaux on your skin. This is a big, complex wine, with big dark fruit flavors of blackberry, dark cherry, and plum, with hint of vanilla, spices, fallen leaves and leather. A hint of cocoa. Big tannins.Complex, mature, and elegant. This is a lovely, lovely, sophisticated red wine.

Morten has a handsome, cherubic face that lights up when he smiles. And I look at him and he makes it seem so effortless, so easy, and I know it is very much the opposite. It's hard, and exacting, and mother nature is a fickle mistress. But Morten was one of those blessed people, touched by the gods, with fire in his limbs and brains and heart, like fine pitchers in baseball, like a sharp pool player, like an Olympic diver, like a fine violinist, or....yes, an artist. Each one of his wines has a point of view, and is exceptional. Like a painting, the final work is as much about the artist as it is about the subject. Whether he was in the Finger Lakes, Napa, or Bordeaux, Morten would be Morten, and he would be just as celebrated as he is. And it should be that way.

Congrats, Morten and Lisa!
Posted by Carlo De Vito at 5:45 AM