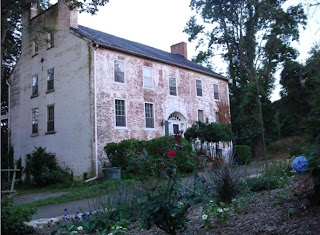 I have friends that don't like Chanbourcin. These individuals use the snarky "too foxy" tag for Chambourcins.Not rich enough. Too oaky. Too sweet. To blah, blah, blah.....

But while I was at the TasteCamp 2012, during the grand tasting of the second day, I tasted two Chambourcins that could easily disprove/charm even the most vehement dissenters. I am of course talking about Zephaniah Farm Winery.

Great grandfather, Zephaniah Jefferson Hatch, built and owned the Monticello Steamboat Company in San Francisco, California starting in 1892. The ferry boats of the company ran from San Francisco to Vellejo, California, which leads to Napa Valley. The company was named for Zephaniah’s birthplace in New York. His son, William N. Hatch, purchased Mill Road Farm in 1950, with the proceeds from the sale of the company- from a life on the water in California to a life on the land in the midst of fine vineyards in Loudoun County, Virginia. Son Bill Hatch (who co-owns the wienry with his wife) and his Tremain, work the grapes and the wines. I met the two at the tasting.

The Hatch family has farmed in Loudoun for 62 years and three generations. From these years on the farm, they have grown to understand the land. Mill Road Farm honors the land by producing pasture-fed Angus, lamb and honey. They sell their farm products at the Loudoun Farmers Market in Leesburg on Saturday mornings year round and at Cascades Farmers Market on Sunday mornings during the summer market season. 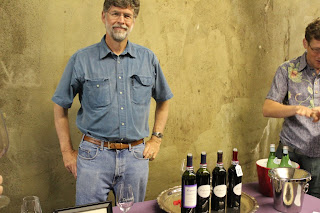 According to the Hatches, "We planted the first phase of our vineyard in 2002. Cabernet Franc is our primary grape, as it is quite well suited to our farm in Loudoun County. We also grow Chardonnay, and we established new plantings of Petit Manseng and Petit Verdot in 2008 and 2009. We are putting in Muscat Ottonel in spring 2012."

They used to sell their wine at the Farmers Market, but now they have regular tasting room hours each weekend. They offer Sauvignon Blanc, Chardonnay, Chambourcin, and Cabernet Franc wines. 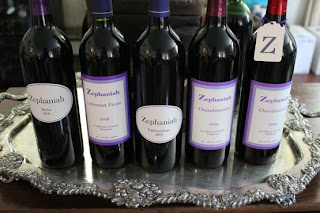 Now, the Hatches say that their primary grape is Cabernet Franc,and the 2009 Cabernet Franc was very tasty. It was aged in neutral French oak for 16 months.It had all the earmarks of a very good Cab Franc. I do not mean to dismiss it at all in the wake of my euphoria over their Chambourcin. Their Cab Franc was a Silver Medal winner in the 2012 Virginia Governor's Cup competition.

But to me, and many other tasters, the Chambourcin was a revelation.

The problem that has oft plagued hybrids is that many wineries treat them as second class citizens and produce them to appeal to the lowest common denominator....they sweeten them up and sell them as their inexpensive wine. This is not a bad thing. They sell hundreds of gallons that way. But a few wineries on the east coast are applying good old fashioned quality wine making techniques back towards some of these hybrids (Hopewell Valley's Chambourcin; Keuka Springs Lake's Leon Millot; Altamont Leon Millot, etc.) with surprising results. Chalk up another smart winery. 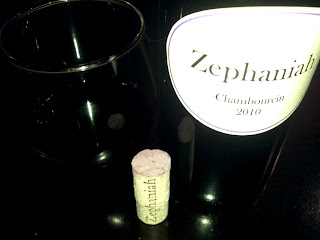 The Chambourcin 2010 was a big chewy monster of a Chambourcin. It had plum and raspberry and was a dark reddish-purple. It was aged in Hungarian and neutral French oak for 12months. On the palate it was exquisite with raspberry, blackberry, and a hint of cassis. Lots of big fruit up front, with low acid and just enough tannin...and wisps of vanilla and orange pekoe. The wine lingered on the palate a good long time,and it was a real pleasure. Fantastic!

The Chambourcin Reserve 2010 was also a joy. This was made from select barrels - Numbers 1, 5, 8, and 10 to be exact. These wines were aged in neutral French oak and Hungarian oak for 12 months. Again, this was a monster wine. Even deep and richer than the previous wine. Big deep shades of prune, plum, and raspberry. There was vanilla, mocha, and a hint of fallen leaf. Again, a long lasting finish which followed these big fruits, low acids, and well structured tannins. A big beautiful wine.

These two Chambourcins were stunners. And Zephaniah is a wine you should be seeking!

Note: Again, I apologize, as i have borrowed other people's photos since I had lost mine during the time of this tasting. Photos have been borrowed from Virginia Wine Time, SwirlSipSnark, and Virginia Pour House. Thank you for your generosity.
Posted by Carlo De Vito at 5:29 AM