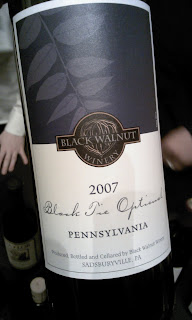 Black Walnut Winery is located in a 200 yr old bank barn in Chester County, Pennsylvania. They renovated the facility for wine tasting and events, but kept that old world feel to reflect the historic craft of winemaking. Black Walnut Winery has the ability to host special events and small gatherings. They are a member of the Brandywine Valley Wine Trail, which includes seven wineries located in the hills of Southern Chester County that produce distinctive regional wines.

According to the website, "It all started one day in 2001 when Lance, Valerie, Jack and Karen decided to try their hand at winemaking. Their friends joined in and they processed 500 lbs of grapes for their 'unofficial' first crush under a canopy of Black Walnut trees at the home of Lance and Valerie. This very quickly became an annual event. Several years later, they began to talk about opening a winery.
In April of 2006 we began the process of renovating a 198 year old bank barn in Chester County, PA to house Black Walnut Winery. We have done most of the work ourselves on the weekends and vacations from our regular jobs and have enjoyed every moment. Friends and family came out in the fall of 2006 to participate in the first official crush at Black Walnut Winery."

Black Tie Optoinal is one of their better reds. This Bordeaux-styled blend is heavy in Cabernet Franc, with some Merlot and Cabernet Sauvignon to add to its complexity. The nose opens as strawberries, but also includes hints of raspberry and cassis. There's also a smokiness to it. The fruit is good up front with ripe cherry, raspberry and plum bordering on prune. Theres also a touch of pepper at the end which came through as promised. Elegant. Very nice!

This was a very nice, complex wine, that could easilly be slipped into a tasting featuring Pollack, Black Ankle or Boxwood. A very nice wine, and a real comer for Pennsylvania!
Posted by Carlo De Vito at 2:33 PM