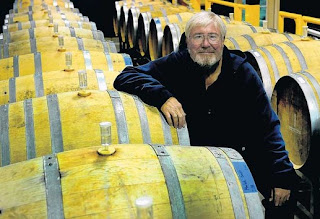 Lovingston Winery recently joined the ranks of wineries in France, Napa Valley and Italy with the caliber of its wine making.

The Lovingston 2008 Josie’s Knoll Estate Reserve received a score of 89 in the December issue of Wine Enthusiast, a magazine that reviews thousands of wines around the world. This is the highest score a Virginia winery has received from the magazine. (A dessert wine from Virginia received an 88 about seven years ago.)

“What it shows is we can produce world-class wines here,” said Ed Puckett, the owner of Lovingston Winery.

The point scale ranges from 1 to 100. The magazine generally only reviews a wine that received an 80 or higher. A score of 80-84 is good, 85-89 is very good and 90 or above is outstanding, said Puckett. Vintners submit two bottles they want to be reviewed and professional wine tasters grade the wine based on aroma and taste.

Maureen Kelly, director of economic development and tourism for Nelson, said she thinks this will increase tourism in the county.

“This rating celebrates the quality of wines from Nelson County wineries and adds one more reason to visit all there is to do on the “sunrise side” of the Blue Ridge,” she said. “Wine enthusiasts look to these ratings to help plan their visit to new wineries and revisit favorite places.”

Seven other wines from the winery have been reviewed by the magazine over the years with all receiving scores in the mid-80s.

Puckett said he is looking forward to the scores for the wine from the 2010 harvest because 2010 had the best growing climate he has seen since he started the winery.

The Merlot is made in the largest quantity because the winery has three acres of those vines.

About 90 percent of the wine is made from the 8.5 acres of grapes on the property. Six types of grapes grown at the vineyard, but Puckett hopes to add more. The winery will sometimes buy grapes from other wineries if needed, Puckett said.

Puckett said that the densely planted vineyards set his winery apart from others. There are 1,200 vines per acre, and the standard practice is to have 600-700 vines per acre. He said he grows the vines so close together because by limiting the amount of fruit the vines can produce, the vines will put the energy into improving the quality of the fruit that can grow in the space.

Another difference is that the vineyard has tall trellises for the grapes to grow on, which lets more leaves have access to the sun, thus allowing more sugar to be made in the grapes from photosynthesis.

The taller trellises also allow the wind to travel through the vineyard better, keeping it dry and preventing the grapes from growing mildew. Lovingston Winery’s trellises are 10 feet tall, about two to four feet taller than the average trellises, said Puckett.

The business plan for the winery is to sell to stores and restaurants along the East Coast and submit samples to wine magazines to be reviewed. Their wine is already sold in 150 restaurants and stores in Virginia, Maryland, Washington. West Virginia, North Carolina and Florida. The wine is also sold to individuals in about 20 states online. About 60 percent of the sales are in Virginia, Puckett said.

“We wanted to become an eastern winery with sales in Virginia and along the East Coast,” he said. “In order to do that we have to build our reputation.”