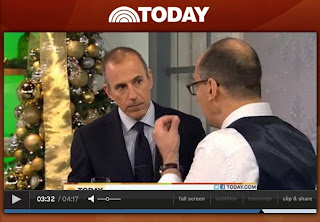 James Oseland, Editor-in-Chief of Saveur magazine, recently wrote about his top food trends for 2012. Among them wre that American wines, other than California, would emerge. He was interviewed by Matt Lauer interviewed Oseland on the TODAY SHOW.

Wrote Oseland:
American terroir will move beyond California California produces some of the best wines in the entire world. Over the years it has become known especially as a place that produces incredible, friendly, super-flavorful jammy reds and oaky whites. But the trend in 2011 was the state’s amazing, subtle wines that are produced in a more classically European vein, like the un-oaky and superdelicious LIOCO chardonnay, or the strawberry-scented Gris de Cigare from Bonny Doon (a real bargain at $15 a bottle).

All the success of California wines has left little room in the conversation for the wines of the rest of America. In 2012, that’s going to change. The wine-growing and wine-making regions of Virginia, North Carolina, the north shore of Long Island and the Finger Lakes in upstate New York are coming into their own and creating wines that are, in certain cases, just as good as wines coming out of California. To wit: the exquisite Dr. Frank’s Riesling from the Finger Lakes region is a fruity, floral delight, and the Texas Tempranillo from Pedernales Cellars in the Texas Hill Country is one of the most drinkable wines available today.