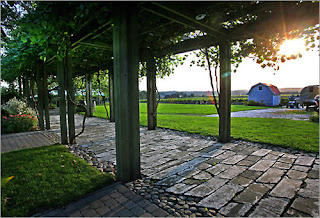 They started out with 40,000 vines — ordered from the Finger Lakes region of New York because they were thought to be hearty. The Westport business now boasts double that number. The first year they produced wine — three years after they first planted — they sold 550 cases of Riesling, Pinot Noir and Chardonnay. The Russells now produce between 5,000 and 6,000 cases annually. Grapes now grow on 80 bucolic acres off of Hixbridge Road. Twenty thousand posts dot the property, which now has 700,000 feet worth of wire.

Carol Russell says the goal has never been size.

Russell says there were four points of genesis for the vineyard and winery: a wine-making kit, a grandparent who had produced wine in upstate New York, a love of wining and dining, and a desire to be "stewards of the land."

Carol, a former teacher, and her husband Bob, a metallurgist by trade, had considered opening a wine operation in California, Oregon, and New Zealand, but loved New England too much to leave, she said. Carol says her husband studied the region's climate and found that the SouthCoast was the sunniest and most temperate part of the state.

They also had to consider things like soil and slope.

"You don't want to have grapes in a hollow, that's where you will get pockets of frost," she said.

The moderating influence of the ocean was a significant factor, said Carol.

Ultimately, they chose Westport, Carol said, in part because it is an "agriculturally-minded community." Previously, the land that is now the vineyard was a dairy farm for 95 years.

Still, 25 years ago, they were wading into what was then uncharted territory.

At the time, "No one had really done this scale of farming with these varieties of grapes in New England," said her son, Bill Russell.

In Carol's words, "We knew this could be dangerous."

Bill Russell said it was assumed that making wine in such a climate would constitute the largest risk, when the biggest challenge during the last two-plus decades has been "convincing people in Massachusetts that it is not a joke."

Five years ago, Carol and Bob's sons took over the day-to-day operations of Westport Rivers. Carol said she and her husband are in supportive roles.

"Rob grows the grapes, Bill makes the wine," she said.

Wine writers for significant regional, national and international publications have hailed their products, while word-of-mouth helped their reputation with the public, said Carol.

Westport Rivers is open Monday through Saturday year round, from 11 a.m. to 5 p.m. www.westportrivers.com