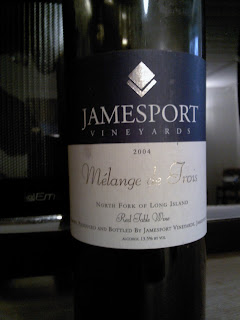 Jamesport has always made some very nice wines. I was early on a fan of their Pinot Noir and some of their dessert wines. And not unsurprisingly, I was also a fan because they, like myself, had been German Shorthair Pointer owners as well.

Jamesport Vineyards is a father-son collaboration that began in 1981 at Early Rising Farm in Cutchogue, New York, making Jamesport Vineyards one of the North Fork's oldest vineyards. Sixty acres of pristine vineyards are located here, with the majority of plantings include Sauvignon Blanc, Chardonnay, Merlot and Cabernet Franc.

In 1986,Ron Goerler Sr. acquired the 150-year-old barn that houses the winery and tasting room Drawing on our exceptional Cutchogue Vineyards fruit supply as well as the talents of his son, Ron Jr., he started Jamesport Vineyards in 1989. It's grown substantially since then.

Recently I went down to my cellar and pulled up something not quite old, but relatively middle-aged. The wine itself is now seven years old. I am constantly trying to see how east coast wines age. And the news is increasingly on the good side.

The 2004 Melange de Trois is a blend of 41% cabernet sauvignon, 31% merlot, & 28% cabernet franc. It has an explosive nose of blackberry and cassis along with a hint of fallen leaves or tobacco. There's also a whiff of vanilla. This tastes and smells like an old-world, Bordeaux styled wine. Medium in body, it's delicious flavors of raspberry, cherry, and dark brambly fruit, give way to do an excellent long finish ... very nice. A very, very good wine.

Jamesport continues to distinguish itself. Bravo!
Posted by Carlo De Vito at 9:55 AM