So, the other night I met Washington Post wine columnist and wine blogger Dave McIntyre out for dinner in Silver Springs, Maryland. Just a couple of web friends sharing some bottles of local wines. A super nice guy.

While Virginia wine is more and more the subject these days, I asked Dave about wine in his own home state of Maryland. He said there were more good things going on in the state that most people realizeed. He talked of revitalized wineries, new wineries, and about John Case and his impact on the local wine landscape. 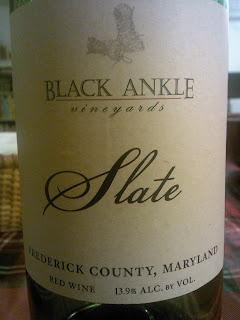 But more than anything, he insisted that the Black Ankle Slate was a wine well worth its price tag. He said it was a wine that could hold its own. Who was I to disbelieve? So we opened a bottle.

Black Ankle burst onto the scene in 2008 when it won the Governor's Cup, and then repeated in 2009 with the same wine (Crumbling Rock). But in 2011 it won with it's newest wine, Slate.

Black Ankle Vineyards is biodynamic. They make sprays made from herbs, compost, elemental minerals, etc. which discourage pests without throwing off the ecological balance in the vineyard. They rely on chemical intervention only when absolutely necessary. They have also made the decision to farm with the principles of Biodynamics, the original Organic farming movement which was founded by the Austrian philosopher Rudolf Steiner in the 1920's. Biodynamics adds several dimensions to work on the farm: working as much as possible by the rhythms of the moon, planets and seasons; a strong emphasis on biodiversity; a goal of self-sufficiency (or as close as possible) for the farm as a whole; and a belief that their farm is a system of interrelated organisms, so that what happens in any one place affects the entire farm.

Since they purchased the property in May of 2002, they have made and applied compost in place of chemical fertilizers and they have never used herbicides of any kind. They use 100% biodiesel fuel to power their tractors. Although they are not yet able to farm 100% organically, they are optimistic that they will get there before too long.

While the farm operation awaits achieving an organic nirvana, the wines have sped ahead. Slate is an excellent example of that. Black Ankle has quickly established itself as one of the leaders of the quality movement in Maryland wine. Black Ankle Vineyards is" dedicated to making wines of place — wines that express the unique flavors and atmosphere of the land on which they are grown."

Slate is a unique blend of 37% Cabernet Sauvignon, 31% Syrah, 22% Merlot, 6% Cabernet Franc, 3% Malbec and 1% Petit Verdot. It is a blend of wine drawn primarily from their 2007 and 2008 vintages, with a bit of 2010 blended in for balance and freshness. The nose is a complex stew of dried plum, raspberry, blackberry, mixed in with a hint of cassis. There are other spices as well, including black and white pepper.

The wine is complex with different aromas and flavors coming through in every sip. The fruit is bold and big upfront, but the acidity is low, and the tannins are only medium, making this a smooth, elegant, immensely drinkable wine.

I was absolutely floored. This was as good as anything I'd recently tasted in Virginia and/or New York especially.

This is a wonderful wine, and I owe it to Dave McIntyre for making me try it!

Thanks Dave! And congrats to the folks at Black Ankle!
Posted by Carlo De Vito at 5:57 PM