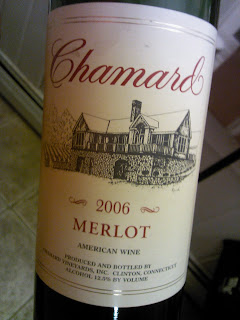 I have been going to wineries a long time on the east coast. And one of the dominant ones in Connecticut has always been Chamard. It was started as a quality winery from the very begining, no picnic wines here. And it's pretty much stayed that way.

Established in 1983, with the present winery building finished in 1988, Chamard Vineyards is among the most beautiful of New England wineries. The 40-acre property boasts 20 acres of established vines that benefit from being only two miles north of, and influenced by the moderating temperatures of, Long Island Sound.

Combining his love of nature and his interest in genetics, Dr. Rothberg purchased the leading vineyard in Connecticut to push the frontiers of winemaking. Originally Incorporated in 1983 by the Chairman and CEO of Tiffany and CO., Dr. Rothberg found in Chamard vineyards a foundation of grace and elegance that would form the basis for even finer wines. 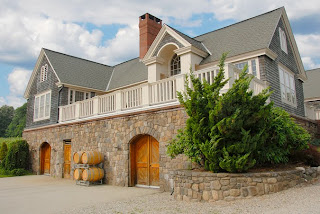 The first vines were planted in the spring of 1984, a 5.5 acre vineyard consisting primarily of Chardonnay with a small quantity of Cabernet Sauvignon and Pinot Noir. From 1986 through 1992 the remaining acreage was prepared and planted, for a combined total of 20 acres. In the summer of 1988, the winery was constructed and Chamard became a licensed farm winery. The first wine, a 1988 Chardonnay was released for sale in November of 1989. Current production is 6,000 cases annually.

They've got a relatively new staff at Chamard these days. Two notables incude their successful marketing manager and their winemaker. 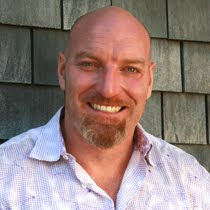 Jeff grew up in Westfield, NY, the “concord grape juice capital.” He studied viticulture at Cornell and has been Chamard’s Wine Maker for 2 and a half years. Jeff’s goal is to make Chamard a leader in the Northeast wine industry and to produce and serve the best wine possible. 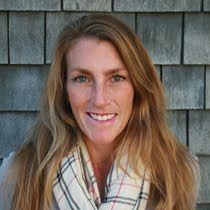 After Rothberg purchased the vineyards in 2006, he hired on Bridget Riordan as the Director of Sales and Brand Management. Bridget originally from Syracuse, attended Boston University where she earned a B.S in Hotel and Food Administration and Business. She was hired by Rothberg to evolve Chamard vineyards into a Connecticut destination.

So recently, while visiting my parents in Connecticut, I had to run into a liquor store- what are the chances of that. And right up front there was a display of several local wines. You could have pushed me over with a feather - Connecticut wine shop owners have not traditionally been strong advocates for local wine.

There on the shelf was the 2006 Merlot. So I bought a bottle much to my wife's dismay ("Really? We don;t have enough wine already?") And we were off. Just a day or two ago we decided to give the merlot a go. It had a beautiful translucent ruby color. The wine is 75% Merlot with Cabernet Sauvignon and Cabernet Franc with small amounts of Petite Verdot and Pinot Noir. The wine was aged for 18 month in American oak. It was bottled in 2008.

On the nose there were dried cherries, vanilla, and a hint of liquorice? or some spiciness. On the tongue it has a wash of bright sour cherry. This is a light- to medium bodied Merlot. It is easy drinking with solid acids, but not heavy on the tannin....just enough. Light, bright and clean sour cherry flavor with good acidity. A nice, more European styled Merlot. Very quaffable. Great with food.

Congrats to the folks at Chamard.