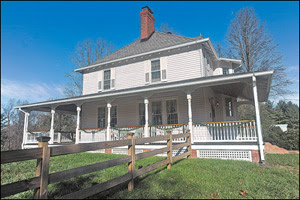 Home of the Week: Christmas at Thanksgiving Farm and Winery
By WENDI WINTERS, For The Capital
Published 12/17/11

Joshua McKerrow - The Capital Thanksgiving Farm and Winery in Harwood's three-story farmhouse was placed on the National Register of Historic Places by the U.S. Department of the Interior in 2007. A bronze plaque by the front double doors announces the honor. The home, once the centerpiece of Richland, a tobacco farm, was built 118 years ago. It was designed in a blend of Colonial Revival and Queen Anne architectural styles by the firm of Noland and de Saussure, based in Roanoke, Va.

What better time to go visit Thanksgiving Farm and Winery in Harwood?

The 58-acre farmstead was carved out of the old 332-acre Richland Farm. Douglas Heimbuch, a fisheries scientist with AKRF Inc., purchased the farm in 1996. He married Maureen, his longtime colleague, in 2003. She, too, works for the Hanover-based AKRF, as a regulatory specialist.

Though the Heimbuchs are not about to quit their day jobs, the winery is more than a hobby. In 2006, Thanksgiving Farm received its commercial winery license, the 23rd commercial winery in Maryland to do so. Douglas had been growing selected grapes and fermenting wines for his own consumption since 1998. Until recently, Thanksgiving was the sole winery in Anne Arundel County. This fall, another, smaller one opened on Harness Creek in Annapolis. The two wineries number among about five dozen statewide.

Production from grape to bottle to table takes about four years. The Heimbuchs produce, on average, about 500 cases - 6,000 bottles - annually. However, due to heavy rainfall and destruction from Hurricane Irene and Tropical Storm Lee this summer, the 2011 vintage will be about 300 cases in 2015. Thanksgiving Farm wines, including red, white and Bordeaux-type varieties, are sold in fine wine and food shops throughout the county. The website is www.thanksgivingfarm.com.

Read the entire story at:
http://www.hometownannapolis.com/news/top/2011/12/17-07/Home-of-the-Week-Christmas-at-Thanksgiving-Farm-and-Winery.html
Posted by Carlo De Vito at 4:30 AM