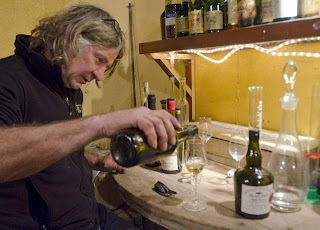 SHELBURNE — If you want a bottle of Shelburne Orchards Distillery’s Dead Bird apple brandy and you’re not already on the list, you’re probably going to have to wait another four to five years.

That is if orchardist and distiller Nick Cowles doesn’t once again cave to pressure from friends and supporters who convinced him to release an inaugural 100 bottles next weekend after a mere two years of aging in 55-gallon Kentucky bourbon barrels.


“I wanted to wait for years,” the lanky Cowles said on a recent afternoon, unfolding himself from the couch next to his copper pot still, a shiny orb that looks like a magic lantern topped with a golden Russian church dome in which he distills hard cider into liquor. “For brandy, the longer you wait the better.”


Cowles, 61, grew up on the 60-acre, century-old orchard and has been making a living from it since the late 1970s through an evolving puzzle of revenue pieces. Over the last several years, he said, his pick-your-own business; on-farm fruit, cider, vinegar and doughnut sales and festivals have settled into a reliable income, allowing him to devote time to longer term projects like becoming a licensed distiller and making and aging his first vintages of apple brandy.


“I had the infrastructure: the orchard, the cider press,” Cowles said. “This is another way to make the orchard a viable agricultural operation.”


He could have stopped at hard cider, which would have taken much less time to get to market, he acknowledged, “but I don’t like hard cider. I like apple brandy.”


Apparently, Cowles is not alone and he had no trouble selling out of his first offering. Even though the 750 milliliter bottles cost $100 each, he filled the list via word-of-mouth six months before their highly anticipated release.


Each will be signed, numbered and delivered at a private reception at the orchard next Saturday catered by Food Network chef, Bob Blumer, who first came to Shelburne Orchards four years ago when filming a “Glutton for Punishment” episode about apple pie.