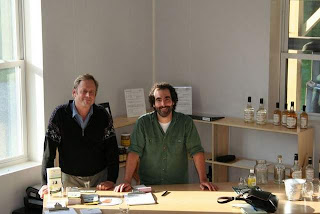 Caledonia Spirits and Winery founder Todd Hardie (left) and general manager, winemaker and distiller Joe Buswell stand behind the tasting table at the Hardwick distillery and winery. / MELISSA PASANEN, for the Free Press


Local honey and berries are stars at Caledonia Spirits and Winery
9:29 AM, Dec. 2, 2011
Written by Melissa Pasanen, Correspondent


HARDWICK — “We are here because of the elderberries and the honey,” said Todd Hardie, standing recently between elderberry bushes and beehives behind his new Caledonia Spirits and Winery building.

The honey-based, and sometimes elderberry-infused, alcoholic beverages fermenting, distilling and aging within the building are the most recent step in Hardie’s life journey in support of the bees and the broader natural landscape.


“When I was 12, I realized I wanted to be a beekeeper in Vermont,” Hardie said, detailing a 46-year path that continued when he graduated from Cornell University’s College of Agriculture in 1976 and moved to the Northeast Kingdom to work as a Vermont state bee inspector.


After 30 years as a beekeeper in the Champlain Valley (a better climate for bees), Hardie recently returned to the Hardwick area where he had maintained close ties with many, including the late garden writer, horticulturist and elderberry expert, Lewis Hill.


Hardie’s first foray into honey-based alcohol was in Shelburne when his Honey Gardens Apiaries launched a line of meads (honey-based wine) about five years ago.


Now under the Caledonia umbrella in Hardwick, the winery continues to produce cold-fermented, aged meads made with raw honey as well as black currants, blueberries and elderberries. Some varieties were aging in French Chardonnay oak barrels in a cool, dark room at one end of the building.


In the center of the long building, the separate distillery business takes over with a still room smelling faintly of the forest thanks to the generous quantity of juniper berries that go into Caledonia’s newly launched Barr Hill Gin.


The gin, which was distilling in a small 25-gallon copper still in one corner, is one of three spirits first sold to the public in late October. An elderberry cordial is also made in that room.


To all three, including a vodka, honey adds both flavor and other attributes.


“The honey softens up the gin and it buffers some of the alcohol’s jagged edges,” Hardie explained.

Read the whole thing at:
http://www.burlingtonfreepress.com/article/20111202/LIVING06/111201019/Local-honey-berries-stars-Caledonia-Spirits-Winery

Caledonia Spirits and Winery is open weekdays 9 a.m. to 5 p.m. and, normally, on Saturdays by appointment. However in December, they are hosting Open House Saturdays on Dec. 10 and Dec. 17 from 10 a.m. to 6 p.m.