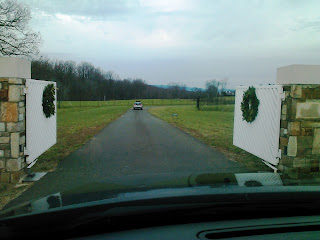 A few weeks ago I had the pleasure of touring several wineries with Virginia wine expert Richard Leahy who's working on a new book entitled BEYOND JEFFERSON'S VINES. I have toured with Richard before. Few people know the terroir of the state like he does. And few know the people who make it all happen in every phase than Richard. Wherever you go with Richard, doors open easily.

He insisted on this trip I see Boxwood Winery among others. I was happy to do so. The 2007 Boxwood had recieved an 88 from Wine Spectatpr for their first release. Luck? I think not! I had blogged about it then, and was happy to tag along now. 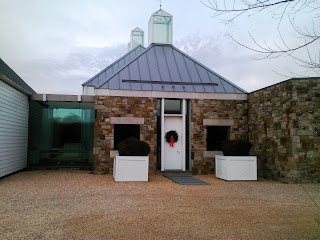 "I am convinced that with today's viticultural knowledge and winemaking techniques Virginia can produce a premium wine as good as anywhere," states Boxwood Winery owner John Kent Cooke.

The sixteen acre vineyard was planned and planted by rebowned Virginia viticulturalist Lucie Morton. Before planting the vineyards, Morton established weather stations all around the property, to guage the microclimates before decideding what grapes where. Morton worked with Purdue University Professor of Enology Richard Vine. Both worked with Hugh Newell Jacobsen, the well known architect, to advise on building a state of the art winery. 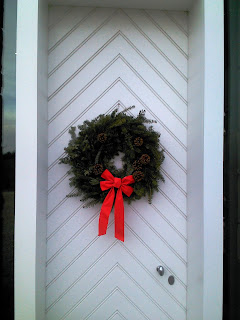 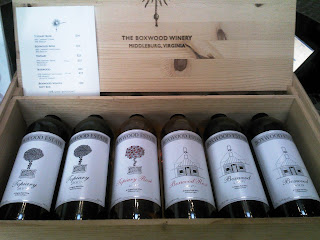 A Normandy steel mill worker's son, Derenoncourt was born in Dunkirk in 1963.The start of his career in viticulture began when he arrived as a hitch-hiker in Fronsac in 1982, and worked several harvests before he found employment at Château Fronsac in 1985. After two years working at various vineyards, he began working in the cellar at Château La Fleur Cailleau. In 1990, Derenoncourt was offered a position at the Corre-Macquin family’s cellar at the Château Pavie-Macquin vineyard, and in 1996 was hired as a winemaker by Stephan von Neipperg to his estates, including Château Canon-la-Gaffelière and the "super cuvée" La Mondotte.

Derenoncourt began as a consultant in 1997, and in 1999 he and his wife started their own consultancy company, Vignerons Consultants. Derenoncourt and his team now works with a populous portfolio of estates in Bordeaux and elsewhere, including Domaine de Chevalier, Clos Fourtet, Clos de l'Oratoire and chateaux Pavie-Macquin, Canon-la-Gaffelière, La Gaffelière, Petit Village, Smith Haut Lafitte, Brown, Les Carmes Haut-Brion, Rol Valentin, Prieuré-Lichine and Beauséjour Duffau-Lagarrosse. In June 2008, Derenoncourt and Vignerons Consultants was hired by Francis Ford Coppola to work on the Napa Valley property Rubicon Estate Winery. Other Derenoncourt projects abroad include engagements in Italy, Austria, Spain, Turkey, China, India, in Syria with Domaine de Bargylus, and in Beqaa Valley, Lebanon with Château Marsyas.

The goal of Boxwood is only to produce 5,000 cases. But of Bordeaux quality wine. It was fortuitous that Adam McTaggart was kind enough to stay late one Tuesday evening to give Richard and I the tour. We could not have asked for nor gotten a better guide. Adam is a graduate of Brock University in Ontario, Canada with degrees in Biology, Viticulture and Enology. He's a great guy, very knowledgable, but friendly and engaging as well. And you could see he was meticulous as we walked around the winery. 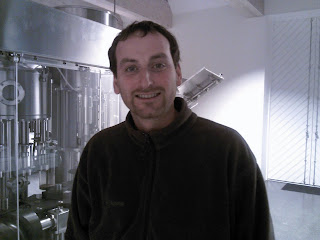 The entrance is enough to let you know that people have spent a lot of time and money on this estate winery. The drive way is impeccably manicured and the winery itself looks like a jewel box - a cross between colonia fieldstone, modern farmhouse, and modern industrial. 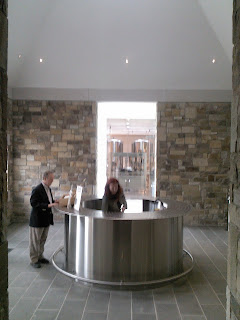 The stainless steel topped tasting bar sits in the middle of the foyer. Three walls of the room are giant glass panes that show the stone and stainless steel in other rooms. 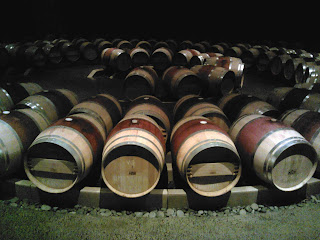 The first thing we saw was the barrel room. The barrel room is beautifully designed in large rings of circles of oak barrels. More about this room later. 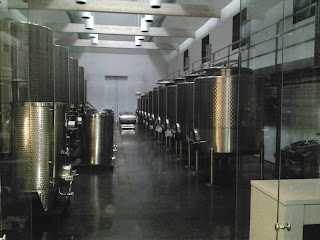 Then there was the tank room. It was incredibly modern and well designed. With six or seven large stainless steel tanks, standing talk like soldiers on eitherside of a large hall. It was immaculate. Even the floor was epoxied, swept, and washied for maximum cleanliness. It looked more like a Madison Avenue shop thank a tank room, it was so pretty in it's design and maintanence. 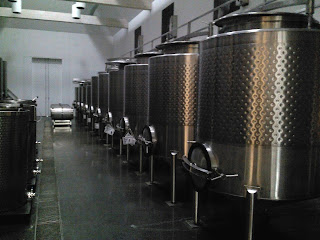 Even the winemaking equipment was clean and put away for the winter. 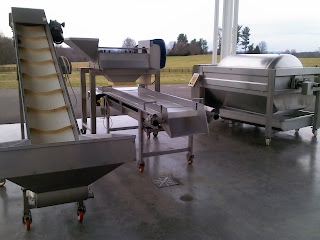 Next, we went back to the barrel - for tasting. 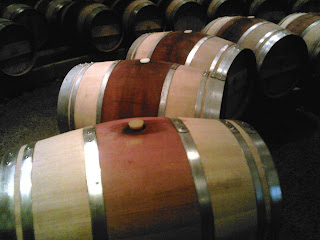 Adam then put Richard and I through our paces. At Boxwood they grow only classic Bordeaux grapes - Merlot, Cabernet Sauvignon, Cabernet Franc, Malbec, and Petitte Verdot. We tasted many of the 2010s right from the barrels. There was not one that would not pass on it's own, but that is not the way at Boxwood. The Cab Francs showed inclredibly with fruits ranging from bright raspberry to dark stewed fruits. The Merlots ranged from bright cherry to dark raspberry/cherry. The Petitte Verdots were dark and round. And the Malbec was incredibly jammy and bursting full of fruit flavor. All of the wines exhibited tremendous fruit, and were surprisingly round for such young wines. We tasted at least eight or nine single block wines from barrels. This barrel tasting is a sure sign of the winery's ascension in the coming years, and confirms for me that 2010 will in fact be a vintage to remember.

One wine in the tank was Boxwood's newest wine. Primarily Malbec with small amounts of other wines. It was big and jammy, with the aromas of prune, dark cherry, and raspberry, and a hint of vanilla. This wine tasted almost like Michele Rolland's Clos de Siete! It was fantatstic! 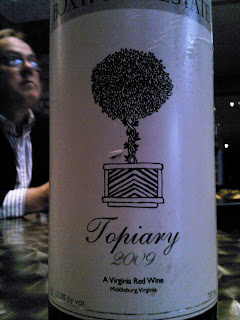 The two bottled wines we tried were the Topiary 2009 and the Boxwood 2009. The Topiary is a blend of Cabernet Franc, Merlot and Malbec. Both the Topiary and Boxwood show the hand of Delencourt. This are rich, Bordeaux styled-wines. Age, fresh fruit, and dusty leaves combine in both wines to absolutely floor the taster. The Malbec gives this wine just enough jamminess and fruit, while the austere Franc and Merlot give it the sophistaction one expects from a classic Bordeaux wine. 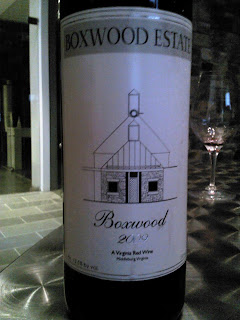 Boxwood 2009 is a blend of Cabernet Sauvignon, Merlot, and Petite Verdot. This dark purple-red wine gives off a nose of blackberry, cassis, and dried cherry. There's also a pinch of saddle leather or autmn leaves. This is a lovely concentrated wine. Still, more French in inspiration no matter the California color. This is a wonderful wine, with low acids, huge fruit, and low-to-medium tannins. Incredible!!!

They do things small, focused, and precisely.Everything they do - they do well. It's awesome.

Don't miss the excitement. Try some or visit today!