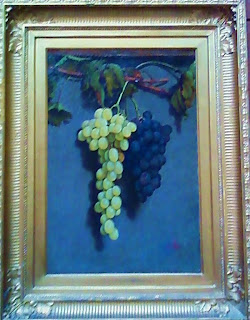 2010 was a vintage for the ages, and tastings of new wines, both red and white, from 2010 have been astonishing. It will go down as one of the greatest vintages in recent memory.

But what about 2011? The New York Wine and Grape Foundation recently released this report on the grape harvest for 2011:0

A sure sign that the 2011 harvest is winding down is that next week will be the final, "wrap-up" edition of Cornell Cooperative Extension's "Veraison to Harvest" newsletter which keeps grape growers, wine makers, and many others informed about what's going on in the vineyards and how to deal with it. This week's edition indicated that it has been an unusual year that has varied by region, but for the most part with plentiful quantity and good to excellent quality.

Growers and processors in the Lake Erie region are the happiest, with a large crop and quality they describe with words like "excellent, great, and exceptional". One reason: they received none of the rains spawned by Hurricane Irene and Tropical Storm Lee.

Those storms devastated the Hudson Valley in particular, and while most vineyards were spared the horrendous structural damage of many other farms, all of the water has made for a challenging year in that region.

In the Finger Lakes, mid-harvest rains caused some growers to drop some fruit due to rot, and generally the grapes came in with lower sugar levels than normal, but the flavors were good and showed little green or vegetal aromas.

On Long Island, which fortunately dodged Irene and Lee but has still faced some weather-related challenges, the fruit quality of the red grape varieties "astonished" CCE's Alice Wise. That region's harvest always ends the latest, and there are still substantial quantities of Merlot and Cabernet Sauvignon to be harvested, so we wish them sunny skies.

Statewide CCE Director Tim Martinson summed it up best: "Reports from around New York indicate a much better year than anyone could have expected--key factors being ample heat in spite of the overcast skies and rainfall that characterized the ripening seasons, and the response of vineyard managers and growers to adapt to this season's challenges."

To that Jim Trezise would add, "...and the timely, valuable information provided every week by Cornell Cooperative Extension through the Veraison to Harvest e-newsletter."
Posted by Carlo De Vito at 5:26 AM