Johnson Estate Dry Reds Are a Knock Out From the shores of Lake Erie! 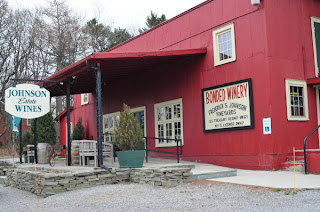 Just beginning this review has not gone well. I took pictures of the labels as I always do, and then accidentally deleted them before I got a chance to write the review. And of course my wife threw out the bottles (as she should). And after that, I found out there are very few photos of the Johnson Estate labels for the wines I reviewed. So I went around and borrowed one from Lenn Thompson at NY Cork Report.

Now this is not one of those posts you read and know they blogger has never been there...I will say emphatically that I have never been there. I do know Fred Johnson though - he and I have been cc'd together on emails....but I have never met him nor conversed with him, although we have several friends in common. 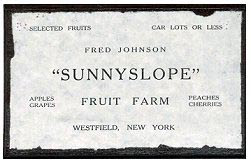 The three I tasted were from his hybrids - Chancellor, Chambourcin, and Marchel Foch. I am a hard head and a sucker for hybrids.

But I have drank his wines. Wow! 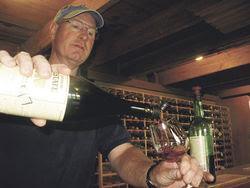 There have been grapes grown on the land which makes up Johnson Estate since the late 1800s. This is when the Johnson family acquired the farm. Fred Johnson was the first to run this land as a commercial fruit farm. He called it Sunnyslope Vineyards. Along with grapes, he also grew peaches, apples, and cherries. The winery itself was once a cold apple storage facility! In 1960 his son, Frederick S. Johnson, came back to Westfield, NY after working in South America for Nelson Rockefeller. He bought the farm from his father and proceeded to remove the fruit trees along with the majority of Concord grapes, which covered the estate. In their stead he replanted the land with various French-American hybrid grapes, along with the Native American varieties of Ives and Delaware. A winemaking tradition was born. Over the years, many more acres and varieties of grapes have been added to this original selection, all carefully chosen for their excellent winemaking potential and their fit into the unique micro-climate which blesses the land. 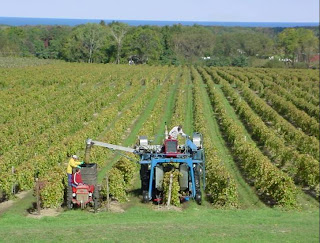 The winery officially began production in 1961 which makes it the oldest family-owned estate winery in New York. The "estate" label is an important one. As an estate winery, the entire winemaking process takes place on the Johnson Estate property. In addition to the extreme attention and care this provides the winery, it also allows the grapes to be picked at their optimal moment of readiness and to be brought into the winemaking process before any unwanted deterioration can occur. Like all aspects of winemaking at Johnson Estate, this advantage makes itself known in every bottle.

Mr. Johnson passed away in April of 1998 and the winery and farm are now owned and operated by third generation of Johnsons. Fred Johnson is the latest patriarch.

The largest grape growing area in the East is found along the southeastern shore of Lake Erie. Combined here to produce classic wine-growing conditions and a northern latitude resulting in long hours of summer sunlight, well drained gravel and shale soils which grapes prefer, and a climate moderated by an adjacent body of water, Lake Erie. This “lake effect” on the local climate is held in and concentrated by the hills of the Allegany Plateau which parallel the lake shore. Located in the heart of this area, the 200 acre Johnson Estate overlooks the lake at the closest approach of these hills to the lake.

OK, onto the wines. 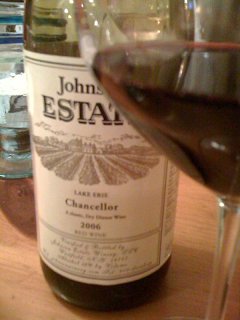 2010 Chancellor
The Chancellor winegrape (Seibel 7053) was developed in France during the last century, with nearly 100,000 acres of it now being grown there (approximately twice the total New York State grape acreage). As its popularity in France would indicate, Chancellor is a vigorous and fruitful vine that produces excellent dark, rich, wines. Johnson Estate Johnson Estate Chancellor has a velvety dark color. Rich plum and prune and chocolate come through beautifully. Big, big almost Califonria like in the beginning, this wine is a big mouthful, and a nice dry, classic finish. Very nice. As noted on their website, this Chancellor will greatly benefit from three to seven years of aging in the bottle.


2009 Chambourcin
The Chambourcin winegrape was developed in France in the late 1800's by French Scientist Joannes Seyve, who gave it the hybrid number J.S. 26-205. There was only a couple hundred acres planted in the United States in the 1970s. However, this grape has garnered considerable attention starting in the late 1980s and may now be the most widely planted red cultivar. Chambourcin has made great strides in New Jersey, Pennsylvania and other eastern states. Johnson Estate Chambourcin has a rich deep velvet color. It has a big nose, full of strawberry, cherries, and plum. There's good acidity and nice tannins structure. A beautiful mouthfeel. And incredible bottle of wine. This is an excellent wine that will sit well in your cellar for the nest ten years, if you don;t want to drink it immediately. But let me tell you, it's good now. A wonderful wine!

2010 Marechal Foch
The Marechal Foch winegrape is the most widely grown red French-American hybrid variety. The vines are vigorous and relatively disease resistant. White Riesling was one of the grandparents in the cross-breeding of Marechal Foch. Along with Burgundy's noble grapes of Gamay and Pinot Noir, the hybrid number that was assigned to the Marechal Foch was Kuhlman 188-2. The Johnson Estate Marechal Foch has a bright bowl full of berries - strawberries, cherries, raspberries. A hint of vanilla on the nose as well. The fruit comes on strong, followed by a nicely balanced attack of acidity and tannin. This is a smooth, easy drinking wine. This is Pinot-ish. Very Burgundian in it's feel and taste. A super, super wine. A real winner! This is one of the best hybrids I've tried recently. Really wonderful. Excellent! Johnson Estate suggests this wine will keep for three years but I say it will last at least five. A classic wonderful Burgundian style wine.

These are three of the best hybrids wines I've had in a long time. Exceptional quality. For those who tell me that hybrids aren't any good, they haven't tried these wines. And if they tell me afterwards they're too foxy, I kno it's time to ignore their opinions. Great stuff!
Posted by Carlo De Vito at 6:35 AM