So we made some chicken brests marinated in some locally made bbq sauce, and I made a big batch of stewed fresh multi-colored peppers and five pounds of roasted potatoes getting ready for the Super Bowl. We had some chips and dips with the pregame and the first quarter, and then by the second quarter we were ready. 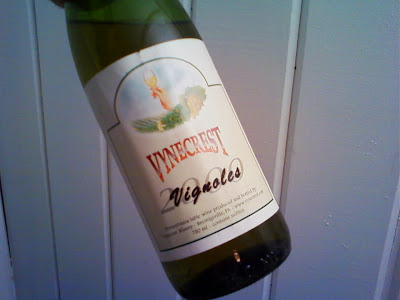 Originally I picked a red, and as I was searching around found a bottle of 2000 Vignoles from Vyncrest. Now I was not sure what to expect. A vignoles from 2000 was either going to be beautiful or it was oing to simply be no good. I figured it was a 50/50 shot.
Not that Vynecrest is a bad producer, but that is the nature with such white wines. A mediocre one would die an ugly death in the bottle, and a well made, well-balanced one would excel.. Knowing Vynecrest, I'd taken my chance and cellared it. I reviewed my notes from ten years ago. Late harvest style. Sweet. Light, honey, apricot, and flowers in the nose.
John and Jan Landis' path into the ancient art of winemaking began in 1972 as Jan was editing a book called "Homesteading." Piqued by the possibilities, they purchased a 5 acre farm in Breinigsville, PA in 1973. Extensive research into soil and weather conditions led them to plant their first fifty vines in 1974. John applied his background to courses in enology and viticulture as Vynecrest Winery officially opened its doors in 1989. In 1994, the Landis' purchased an additional 29 acres of land adjacent to the existing vineyard and began planting first of many separate vineyard blocks on this new land.
In 1997, Vynecrest became a charter member of the Lehigh Valley Wine Trail and moved its original tasting room from the lower section of the barn into a newly renovated upper section, which today still remains as their featured tasting area.
Wasn't sure what to expect, when we uncorked the dusty old bottle with their old label on it. I really should have had blue cheese and raisin walnit bread, but this woul have to do.
The wine was golden in the glass, slightly darker than I remembered it. It had lots of body. Honey colored. The aromas were still there, and very strong. And as for the taste. Incredible! The honey and the apricot were very pronounced. Great acidity! Super balance. A tremendous wine!
I had it with my chicken, it went beautifully.
Congrats to JOhn and Jan Landis!
Posted by Carlo De Vito at 4:56 AM