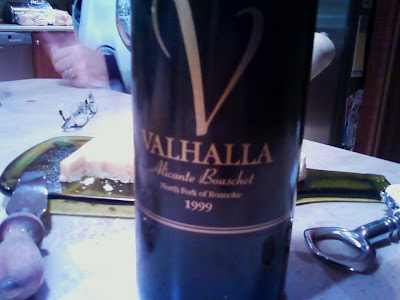 So we went to visit some friends last night in New Jersey for dinner. We drove in a blinding snow storm. Lot's of fun. Lots of back country roads passing small farms in central New Jersey, cows and horses hunkering down in the blustery weather.
We have known Matt and Natalka for many years, going back to our days in Freehold. It is not the first time that either of them has appeared on one of my blogs. They helped us with our farm upstate. They have been with us through thick and thin.
However, they have known each other for many years. Almost twenty. And for Valentine's Day one of hem gave the other a photo of themselves back from the Reagan years, when they were both much younger. It was fun to see. 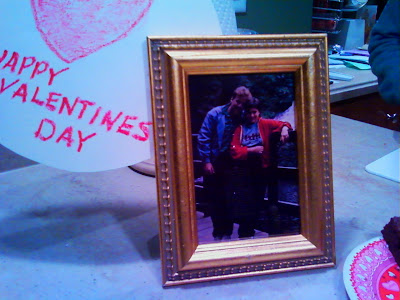 I wanted to bring something special for the evening. And so I brought a bottle of Valhalla Vineyards Alicante Bouschet 1999. Valhalla Vineyards has been growing grapes and producing award winning estate wines from a 2000ft. mountaintop overlooking Roanoke Virginia since 1998. Their 21 acre vineyard produces world class cabernet sauvignon, syrah, merlot, chardonnay, cab franc and more. Its decomposing granite soils and unique climate (similar to Rhone Valley of France) afford the premiere terrior on the East Coast.
Acquiring the property in 1994, James and Debra Vascik began to clear away the peach trees that originally covered the landscape to make way or the grape vines to be planted. Valhalla was the first vineyard outside of California to produce Alicante Bouschet, and among the first to grow Syrah in Virginia. In 1996, construction began on the winery and barrel cave. While excavation for the cave, a Buddha statue was unearthed in the depths. With no idea of why Buddha was left behind, and the knowledge of his good karma, he now blesses our winery and vineyard. The barrel cave at 60 feet underground has the perfect conditions of year round temperature, steady humidity, and darkness to properly age wines for hand crafted beauty. Reminiscent of French caves, their cave is lined with up to 300 barrels representing four vintage years at Valhalla. 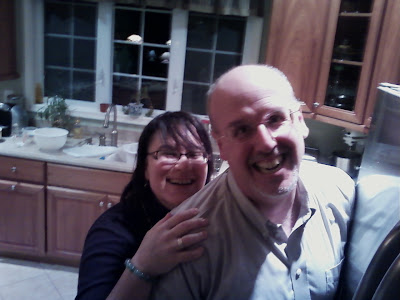 Natalka was originally going to make Chicken Popikash. But she had to change her plans midway through, and so we had Chicken Tetrazzini. I had never had this dish, though I had often heard of it. None of us seemed to know from whence the name came.
Here then a little chicken history from Wikipedia:
Tetrazzini is an American dish usually involving diced fowl or seafood, mushrooms, and almonds in a butter/cream and parmesan sauce flavored with wine or sherry and stock vegetables such as onions, celery, and carrots. It is often served hot over spaghetti or some similarly thin pasta, garnished with lemon or parsley, and topped with additional almonds and/or Parmesan cheese.
The dish is named after the Italian opera star Luisa Tetrazzini. It is widely believed to have been invented ca. 1908-1910 by Ernest Arbogast, then chef at the Palace Hotel in San Francisco, California, where Tetrazzini was a long-time resident. However, other sources attribute the origin to the Knickerbocker Hotel in New York City. 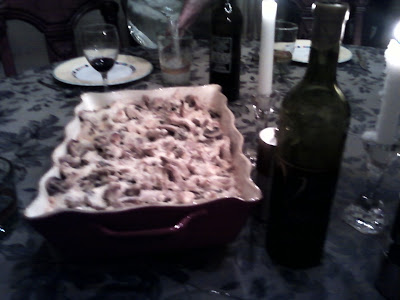 Before the meal, we nibbled on aged, imported Italian Parmasean and Old Chatham Sheep Herding Heart-shaped Camembert. And then we opened the wine. The Alicante Bouschet 1999 was something that had been sitting in my cellar for years. Valhalla is the only grower of this true red grape (the juice is actually red) outside the state of California. Alicante is opaque black in color reminiscent of ink with aromas of dark fruit, cassis, and tobacco. A rare treat!
The wine was like smelling a bowl full of dark cherries. And the cherries came through on the pallet as well. Lots of big fruit up front. A deep, dark, delicious dry red wine! And for a 1999, it had cellared well, and the fruit was still front and tender. not too much acidity, but actually, very well balanced. This was an exceptional quality wine!
It was a great wine to share with great friends. Thanks Matt and Natalka. And thanks Valhalla Vineyards.
Posted by Carlo De Vito at 6:36 AM