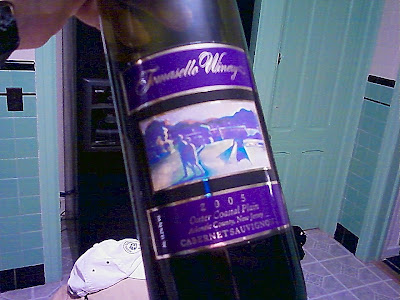 The wine in question was a Tomasello Cabernet Sauvignon 2005 Outer Coastal Plains. Tomasello is an old winegrowing family, currently run by Jack and Charlie Tomasello.

In the 1930's, Frank Tomasello was a berry farmer in Hammonton, New Jersey growing raspberries, strawberries, peaches and sweet potatoes. He also had a knack for growing grapes and a passion for wine. In the 1940s, Frank brought his sons Charles and Joseph into the business. They grew their father's business into a commercial winery. They also began producing sparking wines. In the 1980s, a third generation of Tomasello's joined the business when Charles' sons Charles, Jr. and Jack came on board. Together they worked to expand the winery and revamp the vineyard. In the vineyard they planted Vinifera vines, adding Chardonnay first, than Cabernet Sauvignon three years later.

Tomasello is a very large wine company. Certainly among the larger wineries of the east coast. They make everything from jug wines to well made, quality varietals. However, I must admit, it was not until I read a review by New York Times journalist Howard G. Goldberg, that I gave their better wines, more serious attention.
The 2005 Cabernet Sauvignon was harvested from their vineyard and was fermented to dryness with a yeast originally isolated from a Languedoc terroir. The final assemblage was approximately 75% Cabernet Sauvignon, with a blending in small parts of Petit Verdot, Chambourcin and Cabernet Franc - all grapes grown in their own vineyards in the Outer Coastal Plan viticultural area. This wine is unfined and unfiltered for maximum flavor intensity. The Cabernet Sauvignon, "Scored an 87 at the World Wine Championships....." Best NJ Red Wine - Smoky cedar, dark chocolate sauce, pickled peppers and raisin-currant puree aromas follow through on a brisk round entry to a dryish medium body with singed nutshell and berry notes. Finished with a tart smoky, pithy fade"... Beverage Testing Institute.
I opened the bottle and poured myself a glass. It was a dark red-purple color. At it smelled of dark cherries and vanilla. It was a deep, dry red. Plums and some prune come through. Nice tannins and acidity. Good balance. It was a wonderful, incredible wine. Really one of the better red wines of the east coast. A great accomplishment.
My hats off to Tomasello!
Posted by Carlo De Vito at 6:42 PM