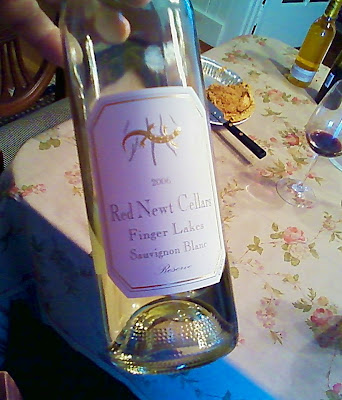 I first met David Whiting in the summer of 2000. The winery wasn't two year old. Red Newt Cellars was founded in 1998 by David and Debra Whiting. Wine production was started with the 1998 vintage with a mere 1,200 cases of Chardonnay, Riesling, Vidal, Cayuga, Cabernet Franc, Cabernet Sauvignon and Merlot. The first white wines were released at the grand opening of the winery and restaurant in July of 1999.
Now, this is not to say that David Whiting and I know each other. I have met him several times, but always as a consumer. He would never remember me. But I remember him...well, maybe more accurately, his wine.
I am a big fan's of David's wines and the 2006 Finger Lakes Sauvignon Blanc is incredible.
Dominique made a salad of fresh romaine lettuce, diced apples and pears, a little blue cheese, and some other shredded veggies, which she doused carefully with olive oil and lemon juice. It was a phenomenal salad, which she paired with a whole wheat baguette.
David's Sauvignon Blanc stood right up to the salad. It was fresh, crisp, clean, bright. Nice fruity flavors up front (so many bad Sauvignon Blancs are a bland white wash) and good acidity. Refreshing. A nice grapefruity ending. A marvelous wine!
Posted by Carlo De Vito at 6:56 AM