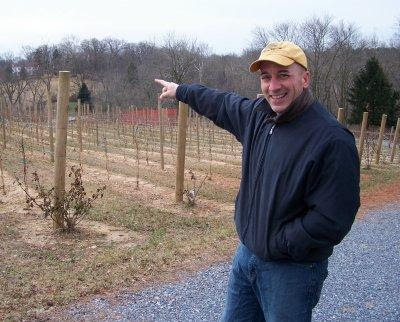 LOWER OXFORD — The latest in solar energy technology is proving to be a good mix with even the oldest of businesses. Historic Hopewell Vineyards is undertaking the installation of a new solar energy system that will give it enough power to survive upcoming electricity rate increases, and sell back energy to the power company until the business grows to the point where it will be using the entire electrical output.Founded in 2002 by Karen and Anthony Mangus, the vineyard currently has 13 acres in production with eight varieties of wine grapes. Last year the vineyard produced 58 tons of grapes, which were sold to three Pennsylvania wineries for processing into wine.

From the beginning the Manguses' plan has been to establish the vines first, then eventually build their own winery at their Lower Oxford location. While the economy has slowed their timeline somewhat, state and federal incentives for alternative energy sources motivated them to go forward with installation of a new grid-tiered solar photovoltaic system.State and federal credits will combine to cover 67 percent of the cost of the solar energy project. Additionally, installing the system at this point in the development of the business will allow more flexibility when expansion occurs."It was the rising electric cost combined with the incentives," Anthony Mangus explained, noting that from the inception of the business, they had hoped to use alternative energy sources. "We get to do the good thing environmentally. Not just for business owners, but for residential owners, it's a good time to do it."Going green is a natural fit for a business that depends on the sun for growing grapes. The vineyard already uses electric vineyard motor cars and low-output sprayers that minimize chemical usage, as well as two small, 125-watt solar panels for bird protection and weather reporting.

After extensive research and comparing bids, the Manguses contracted with J.K. Mechanical of Willow Street to install the pole-mounted system. Eleven arrays will be installed on the hillside at the end of rows of grapes, high enough that they will not interfere with farm equipment or shade the vines.Each 13-by-15-foot array is composed of 12,210-watt Shuco solar modules, with the DC power converted to AC using power inverters yielding 36,070 kilowatt hours of electricity per year. That electric will be tied to the PECO grid and metered, so that excess energy can be sold back to the company. In the process, the company will also reduce its carbon emissions by more than 20 tons per year and allow it to sell carbon credits.The system does not store electricity, so it will function during the day to supply electricity to the house, business and farm buildings, and eventually to a winery. When the panels are not producing electricity in the evenings, the farm will switch back to using PECO-supplied electric.Solar power for wineries has already become popular in Europe and California, but is a bit slower coming to this area.
Read the rest at:
http://www.pottsmerc.com/articles/2010/02/01/news/green/doc4b670594ac80a772236775.txt