Editor's Note: The following piece is not mine. I had intended to put it in a tickler file and then drege it up when the next time the Maryland Wine Festval rolled around, but decided that with the passing of Bob Ziem, no time was more appropriate than now. 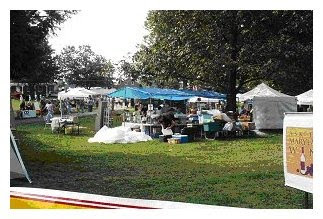 The First Maryland Wine Festival, 20 [Some] Years Ago
by Jack & Emily Johnston
The very first Maryland Wine Festival was held at the Shriver Homestead in Union Mills, in September, 1984. It was the brainchild of John Barker, then director of tourism in Carroll County. How he conceived the idea is unknown, and the first we heard about it was in the early spring, when he called the local chapter of the American Wine Society and asked for help in planning the thing. Well, sure! Anything to do with wine, count us in.

The details are vague now, 20-some years later. The basic Festival was pretty much the same then as it is now, but on a much smaller scale, and was held for only one day. The Wine Education Seminars, managed by a few stalwart compadres, were part of the original program. There was an amateur wine adjudication, but it was an impromptu affair. Folks brought in their homemade wines and asked for comments on them. No one had planned for this. The idea for a wine-making demonstration had not yet germinated.

The Festival got off to a rather rocky start at 10 a.m., just as the gates were opening. Some guy was driving by and rubbernecking at all the goings-on, and rear-ended a car waiting to make the left turn into the Homestead. He was immediately descended upon by 20 State Troopers with breathalizers. Turned out, even at 10 in the morning, the driver posted about a .08. And he’d not even been through the gates.

One of the notable features of this event was the attendance of Leon Adams, a prominent author of many wine books. He autographed copies of the new edition of his best-selling book, “The Wines of America.” In our copy he wrote, “Let’s do this again!” And we have, of course, for 20 years now.

The attendance was about 5,000 people, about twice as many as anybody anticipated. This was one of the motivations to move the Festival elsewhere the following year. The facilities at the Homestead were severely strained. A new home was found at the Carroll County Farm Museum – where the festival still proudly resides today.

In those days most red Maryland wines left a lot to be desired. There were a few good ones, but the budget for the Wine-Ed Seminars wouldn’t accommodate those – the good ones tended to be the most expensive ones. So a California Zinfandel was used instead, even though a Maryland wine would have been preferable. The first white used was a Montbray Seyval Blanc. Ham Mowbray, proprietor of Montbray, complained later that day that we were doing too much educating. An attendee at one of the sessions tasted something from Ham’s tent, and proclaimed it “cloudy” (which was, incidentally, true), and bragged that he had learned about this characteristic at the Wine-Ed seminar.

There were eight winery participants in that first Festival. Many of the current wineries were only a dream in their owners’ minds back then. Several of those participants are no longer with us, including Montbray. The wineries included Ziem, Byrd (both now gone), Catoctin, Berrywine, Elk Run, Woodhall and Boordy.

Carol Wilson (Elk Run) said that they had one small tent, one table and two pourers, and ran out of wine fairly quickly. Bob Ziem remembers being inundated with customers, and totally overwhelmed by the number of people at the festival. Rob Deford (Boordy) agreed, said that they were surprised by the huge turnout.

1984 was not only the first Maryland Wine Festival, but also the year that the Association of Maryland Wineries was organized. Rob Deford, the first president of the group, said that it happened largely because the wineries needed to band together in order to make sure this event was a success.

They did, and it was. And still is.

Read the article at:
http://www.marylandwinefestival.org/history.shtml
Posted by Carlo De Vito at 8:06 AM