We have about three feet of the fluffy white stuff surrounding the house here in New Jersey. It's that time of year. But three feet is a lot for this region. And I'm sick of it all already. Now, tonight, I came home early form the city, because my wife was in town with the boys. They came in around lunch time. We all went out for lunch. They went to the Metropolitan Museum of Art, and then we met at the parking garage late in the day and were in the Lincoln Tunnel by 5pm.

We went home, and were joined by my father in law, Bob Hoover and his dog Lulu, and we ate spicy Chinese food. I pulled out a bottle of Dr. Konstantin Frank Johannisberg Riesling Semi-Dry 2001. It was another dusty colored bottle. Bob loves semi-sweet Rieslings.

The Franks have been turning our classic German-styled bright Rieslings for five decades. Dr. Konstantin Frank was making them as far back as 1960, as pictured above. They are one of the grand cru houses of the east coast. 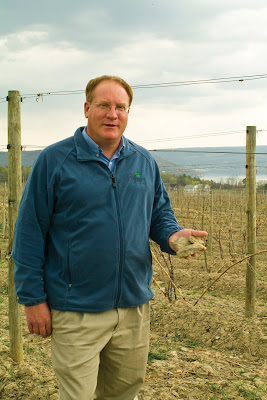 Fred Frank is the third in a long line of Franks who have helped define and give rise to classic wines in the Finger Lakes and New York state. 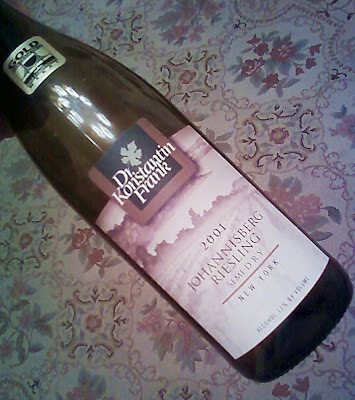 There, in the golden glow of the dining room, me and the boys and Bob ate shrimp with vegetables and brown rice, Shezchuan Cold Sesame Noodles, General Tsao's Chicken, and House Lo Mein.
I have always liked pressing my wines in the cellar, seeing how long I could store them before tasting them. Maybe this should have been drunk a few years earlier, but I have always found that semi-sweet and sweet white wines age well. It was a Konstantin Frank bottle, and semi-sweet, so I was confident that this one would work.
The wine was cold and bright. A slight goldish color to it. It had hints of apple, honey, and apricot. On the tongue it was apricots and honey and a touch of green apple. Smooth and delicious. Well balanced. Exceptional.
Another great vintage from Dr. Konstatin Frank!
Posted by Carlo De Vito at 5:40 PM