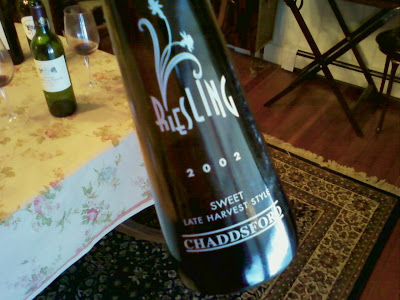 Last night we were tasting numerous dessert wines, and one of them was a Chaddsford Riesling 2002 Sweet Late Harvest Style from Chaddsord Winery in the Brandywine Valley in Pennsylvania.

Chaddsford Winery, located in the Atlantic Uplands district, is among a handful of wineries in the eastern United States who have achieved a national reputation for producing premium wines of world-class stature. Since the winery's first release in 1983, each successive vintage has received critical acclaim from wine writers and critics across the country. Among those who have given top marks to Chaddsford wines are Robert Parker, The Wine Spectator, Bon Appétit, Gourmet, Food & Wine, Decanter, Wine Enthusiast and the New York Times.

We tried the wine while were were eating an apple pie from Gigi Market at Greig Farm. The pie was fabulous! The wine was great, but it didn't do well with the pie. And we set it aside for a different wine. But after the pie was finished, we came back to it, and when I came down this morning, thinking I'd have a glass again tonight after dinner, I was extremely disappointed. It was finished.

Eric's wine is not an overly sweet, ice wine. Instead it is an elegant, semi-sweet wine, with lots of flavor and nice acidity, which keeps it from being a gross sticky confection. Instead, there's melon and honeydew, and a touch of... mango? Maybe some sour apple?

It would have been better if we had served it with the cheese and raisin-nut-bread we had enjoyed earlier. But there was no denying, at the end of the night, it was the wine everyone was savoring.
Posted by Carlo De Vito at 6:35 AM