Sugarloaf Mountain Vineyard was conceived with awareness of the unique character of the property, the quality of the soil, and with familial commitment. The double-bank red barn – built in the early 1900s – the silo and windmill are all signature landmarks of the farm. Purchased by Dan and Polly O'Donoghue in 1962, the 92-acre “Windmill Farm” has been a working farm and family retreat ever since. Owned and operated by the four children – the McGarry, McKenna and two O’Donoghue families – the transformation from a traditional farm to a vineyard broke ground in 2002. A wine making team was formed, and soon vines were planted and being nurtured. By 2005, the winery was complete and they were making their first vintages. The award-winning results are worth a taste!

Sugarloaf Mountain Vineyard grows the five Bordeaux red grapes (Cabernet Franc, Cabernet Sauvignon, Merlot, Malbec and Petit Verdot) and two white grapes (Chardonnay and Pinot Grigio). They age their wine in French oak barrels except for Pinot Grigio which they keep in large stainless steel tanks to enhance a crisp flinty citric finish. Their aging program calls for one to two plus years in the barrel depending on the vintage (and their winemaker’s call).” 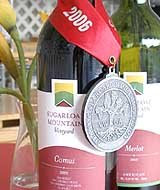 Their Awards
They were are honored that nearly all of their vintages to date have been award winners, recognized by state, regional and international organizations. Here are their most recent honors:

Go see SMV to celebrate the gala Grand Opening dedication of the Tasting Room beginning Saturday, January 17 from 11am-6pm and continuing each day all the way through the Presidential Inauguration on January 20th. During their extended 4-day celebration, they’ll feature wine tastings and tours of the winery, sales on selected wines, hot soup, cheese platters, hors d'oeuvres, bottle engraving and entertainment.