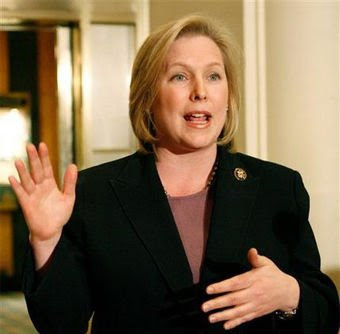 After being sworn into the U.S. Senate Tuesday, Kirsten Gillibrand (D-NY) announced Friday her committee assignments in the chamber.

Sen. Gillibrand will serve on the Environment and Public Works Committee, the Senate Agriculture Committee and the Foreign Relations Committee.

Here's a breakdown of the committees' tasks and jurisdiction, as described in a press release sent by Gillibrand's office:

"The Agriculture committee has a little bit for everyone in New York, from funding for low-income families that need food assistance, to programs to support the growing organics markets, to technical assistance and insurance for the vineyards of Long Island and the dairy farms of Western New York," said Senator Kirsten Gillibrand.

for more, read the whole thing at:
http://www.cbs6albany.com/news/committee_1260533___article.html/gillibrand_environment.html
Posted by Carlo De Vito at 1:24 PM