As if it’s not enough of a challenge to grow wine grapes in New Jersey – especially the major European vinifera varieties such as chardonnay and cabernet sauvignon - the determined folks behind Villa Milagro Vineyards, one of our state’s newest wineries, are upping the ante by going organic. In fact, theirs is one of only two organic vineyards on the entire East Coast. 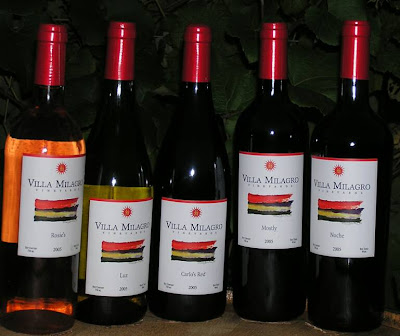 Steve Gambino and Audrey Cross-Gambino planted their first grapes in 2003 on a scenic, 104-acre cliff overlooking the Delaware and Musconetcong Rivers in Finesville, not far from Alba Vineyard. Steve, a businessman and former formula racecar driver, is operations manager and Audrey, who was raised in California’s grape-growing Central Valley, is winemaker. “Dr. Audrey,” as she is known, has a Ph.D. in nutrition, is a former television host, and the author of numerous books. She also conducts cooking classes at the winery.

READ THE REST AT:
http://newjerseylifemag.blogspot.com/2009/01/new-jerseys-first-organic-winery-small.html

For information about visiting the winery, tasting the wines, and meeting the committed, genial folks who produce them, log on to VillaMilagroVineyards.com.
Posted by Carlo De Vito at 8:14 PM