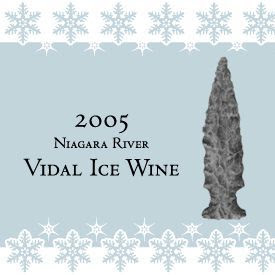 Wine Spectator Magazine Awards 90 Point Score To Arrowhead Spring Vineyards’ Vidal Icewine
In its history, Wine Spectator has rated only 5 NY wines higher than this, one 92 point and four at 91 points. This is the second highest ranking ever for an Ice Wine produced in NY State. Our 2006 Barrel Fermented Chardonnay was rated an 86, making it tied for the highest rated 2006 NY Chardonnay. Read More

Wine Spectator awards Arrowhead Spring 90 points
There’s no overstating the importance of receiving a 90 point score from Wine Spectator Magazine. A score that high goes a long way to legitimizing a winery to many professionals, retailers and consumers. New York wines have often been associated with a virtual glass ceiling of 90 points, since scores this high have been rare from major wine publications.

I’ve tasted both of these wines and consider them to be among the best quality wines in the Niagara Region. The chardonnay is well balanced with just enough oak to compliment the zesty fruit. I think this would be an attractive wine for both “naked” and oaked chardonnay fans. Arrowhead’s Vidal Icewine is a transcendent experience in itself. Jam-packed with too many fruit aromas to list here, it shows a complexity that far exceeds that of more expensive icewines.

Since both of these wines were made with purchased fruit, it only heightens my anticipation for Arrowhead’s estate wines. Hopefully these scores will help spread the word that Niagara Region wineries are quietly establishing themselves as serious wine producers that can compete with the very best of other east coast wineries.