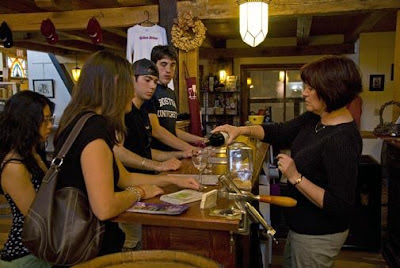 The owners of a Lancaster County winery hope to attract more visitors and increase sales by collaborating with neighboring wineries.

Richard Carey and Linda Jones McKee, the owners of Tamanend Winery in Manheim Township, are developing a wine trail that they hope to launch within six months.

Carey said he plans to invite wineries in Lancaster and York counties to join the Red Rose Wine Trail.

"You have to have a compatible group of people that will do it," Carey said.

Tamanend Winery began in Carey's home in 2001. He relocated to Lancaster County from California, where he had been making wine professionally since 1977. In August, the winery moved into a larger production facility. The company's wine is made solely from grapes Carey buys.

Tamenend's wine is sold at its Red Rose Tasting Room, along King Street in Lancaster. The store also sells wine made by Allegro Vineyards and Moon Dancer Vineyard & Winery, both of York County.

"You could look at the store as being a wine trail where you don't have to travel to the winery," Carey said. "It's a good way to show off what we have all together."

Wine trails are helpful because of being able to work with other wineries to promote and cross-market their wines, he said.

"All the reasons for putting up with that is to get people to know about your wine," Carey said. "It's a fun thing to do. People then remember and come back because they had a good time."

The Pennsylvania Dutch Convention & Visitors Bureau made an effort to collectively promote the county's wineries in 2006, said Christopher Barrett, president and chief executive officer of the Lancaster County-based organization. The county's wineries were advertised together as a part of FlavorFest, which promoted Lancaster County as a culinary destination, he said.

"FlavorFest was an attempt to get them to band together a little bit more," Barrett said.

Tim Jobe does not think it is good that Lancaster County's wineries have yet to band together and create a wine trail. But he also said the problem may be that the wineries in the county are too far apart.

Jobe is one of three owners of the Twin Brook Winery in Sadsbury Township. It is about 30 miles from the next closest winery in Lancaster County, he said.

"It's been one of the best things that has happened to us as far as marketing goes," Jobe said. "I spend hardly anything on advertising. All my advertising comes from that."

At least 10 percent of Twin Brook's annual sales come from wine-trail travelers, Jobe said. The main event promoted by the Brandywine trail takes place in March, when business at the winery would normally be slow. Rather than seeing about 30 customers over a weekend, a couple hundred will pay a visit to the winery that month, Jobe said.

"Wine trails are a fantastic thing," Jobe said. "I would have never imagined it would be such a great business booster. It's really been a fabulous way to get people through."

read the story at:
http://www.centralpennbusiness.com/article.asp?aID=66091
Posted by Carlo De Vito at 4:30 AM